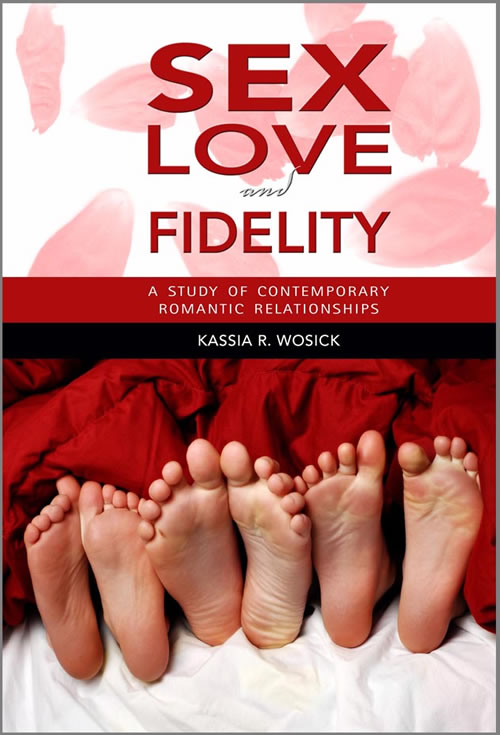 “This is a fascinating investigation of the meaning of ‘love,’ ‘sex,’ and ‘fidelity’ for different kinds of couples. Kassia Wosick reports on ... couples that were straight and gay, monogamous and non-monogamous, traditional and polyamorous. ... The traditional focus on sexual exclusivity does not fit many contemporary relationships. This is a very valuable book for researchers and therapists, and for all of us who care about ‘love,’ ‘sex,’ and ‘faithfulness’.” – Professor Francesca Cancian, University of California, Irvine

Romantic relationships hold enormous significance within contemporary society, and monogamous marriage continues to serve as the “master template,” informing the structure, personal and legal parameters of intimacy. Although social changes have indeed impacted traditional notions of marriage and coupledom, monogamy continues to serve as the ultimate embodiment of commitment, love, and devotion to one’s partner and operates as the fundamental framework of sexual and emotional exclusivity.

Relationship rules serve as a key indicator of what individuals expect and value within their intimate lives. For example, the rules of marriage (and therefore monogamy) emphasize loyalty, exclusivity, and faithfulness between two partners, which is generally operationalized as fidelity. Further, rule violations are often characterized as “infidelity,” and represent a breach to the commitment established between partners. The rules of monogamy, as well as the consequences for violating them, have been normalized and institutionalized in both paradigm and practice; American culture is decidedly mononormative, and fidelity is central to monogamous relationships.

While the master monogamous template continues to be institutionally and individually reinforced, some actively choose to “break the rules” of monogamy in favor of multiple sexual and/or romantic relations. Consensual nonmonogamists, in contexts like open relationships, swinging, and polyamory, challenge the master monogamous template through not only engaging with multiple sexual and/or romantic partners, but also being consensual and usually overt about them. If monogamists have rules about other partners that ensure fidelity, do nonmonogamists have rules? If so, what are they, and what purpose do they serve in a relationship structure that has already broken the cardinal rule of exclusivity? Is commitment important in nonmonogamous relationships, and does fidelity exist between partners who are having sex with and/or falling in love with other partners?

This study draws on over 2,000 surveys and 70 in-depth interviews with monogamists, nonmonogamists, and polyamorists to examine the meaning, significance, and practice of fidelity within their intimate relationships. Results indicate that fidelity exists in some variation in all relationship types. The book presents a “Fidelity Typology” based on differentiations between sexual and emotional exclusivity, as well as whether behavior aligns with ideology. The author argues that while exclusivity may not be a necessity in today’s romantic relationships, “feeling special” is key regardless of whether a relationship is monogamous, nonmonogamous, or polyamorous. However, how an individual experiences and ensures specialness is tempered by definitions of love and sex, differentiating between sexual and emotional exclusivity, and engaging individual agency in creating rules between partners. The book highlights that gender and sexual orientation are most salient in conceptualizations of monogamy, sex, and love, rates of nonmonogamy, and even relationship agreements and rules.

The author offers a nuanced framework for understanding commitment in today’s romantic relationships, invoking a more agentic approach to achieving specialness called “personal fidelity.” The author argues that while personal fidelity is ultimately socially informed through the master template, it is also largely based on one’s sexual and emotional self-awareness, accountability, and perceived responsibility to other partner(s). Personal fidelity may well be the catalyst for ensuring specialness between partners and preserving the significance of one’s intimate relationship(s).

This is an important book for sexualities studies, as well as scholars and students interested in gender, family and intimate relationships.

Read the post at the Cambria Press blog too!

“Extremely well-researched and coherently argued, this book presents top-quality research and draws appropriately on the existing knowledge in this area. The focus on fidelity across different kinds of relationship structures is very original and will prove an important contribution to the field of relationship research. A key strength of this study is that the analysis pays attention to both commonalities and diversity (which is rare, even in qualitative research). The analysis is also both clearly expressed and sophisticated.” – Dr. Meg Barker, Open University

“This is a fascinating investigation of the meaning of ‘love,’ ‘sex,’ and ‘fidelity’ for different kinds of couples. Kassia Wosick reports on a survey and in-depth conversations with couples that were straight and gay, monogamous and non-monogamous, traditional and polyamorous. ‘Love’ and ‘being special’ are enormously important in all of these groups. But she also finds startling differences. For some, sexual exclusiveness is critical. For others, being faithful means not loving anyone else, but sex with others is ok. For polyamorous couples, having explicit rules and being open and honest is the heart of fidelity and being special. And “having sex” can mean many different things. This book persuasively argues that we need more flexible, emotion-focused concepts of love, commitment and fidelity. The traditional focus on sexual exclusivity does not fit many contemporary relationships. This is a very valuable book for researchers and therapists, and for all of us who care about ‘love,’ ‘sex,’ and ‘faithfulness’.” – Professor Francesca Cancian, University of California, Irvine

“Engaging, insightful, thoroughly researched, and well written, Sex, Love, and Fidelity: Study of Contemporary Romantic Relationships provides a compelling analysis of evolving relationships with a unique focus on levels of monogamy that surpasses previous studies to contribute refreshing insights into current meanings of sexuality and love. Wosick untangles the myriad cultural assumptions underlying the concept of fidelity and details the various ways in which fidelity expresses in a range of contemporary relationships, from dual fidelity and strict monogamy through veiled fidelity and almost monogamy to specified fidelity and non-monogamy and ending with agentic fidelity and polyamory. Now that few people in the US expect to be monogamous in the classical sense of marrying as a virgin and remaining in one, life-long, sexually exclusive relationship, Sex, Love, and Fidelity provides the information necessary for us to update our understandings of contemporary love and commitment.” – Dr. Elisabeth Sheff