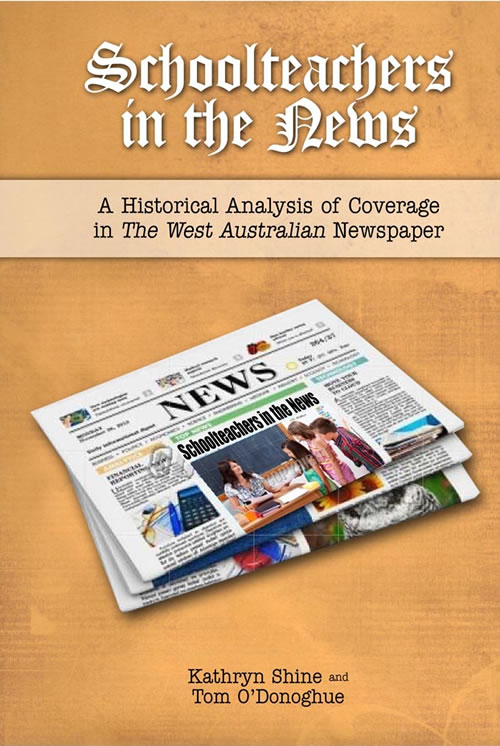 Schoolteachers in the News: A Historical Analysis of Coverage in The West Australian Newspaper by Kathryn Shine and Tom O'Donoghue

Despite the recognition that the news media has an influential agenda-setting function, plays a pivotal role in shaping public opinion, and can influence educational policy, research on this is scarce. This book helps fill the gap on how teachers are depicted in the media and points the way towards one of a number of avenues of research that other scholars in the field could take for various contexts (including different countries) and time periods.

Research examining how schoolteachers have been represented in the news is scarce. This is noteworthy, given the recognition that the news media has an influential agenda-setting function, plays a pivotal role in shaping public opinion, and can influence educational policy. Indeed, there is a view amongst some authorities that education policy and news media coverage are irrevocably interconnected.

Specifically in relation to newspapers, research indicates that their coverage can be particularly influential in informing and influencing public debate and policy about a variety of educational issues. Research has also been conducted on the reactions of teachers, reporting that they perceive news media coverage as important in shaping public opinion and education policy, as well as affecting their relationships with families, friends, and the community. Teachers in various countries have also expressed frustration at what they have perceived as a negative focus in coverage.

Furthermore, news media coverage has been seen to play a role to the decline in the status of teaching that has been documented by researchers from many developed countries over the past three decades. It has been claimed that contemporary news media coverage has led to greater scrutiny and criticism of the teaching profession than ever before, with educators increasingly having to explain and justify their work.

In addition to the widespread concern about the decline in the status of teaching, many countries are experiencing ongoing teacher recruitment and retention problems. Despite this, very few studies have considered how schoolteachers and teaching as a profession are depicted in the news media. Particularly scarce are investigations with a historical dimension. This book helps fill the gap by examining the reporting in The West Australian newspaper, one of the oldest newspapers in Australia and a daily publication since 1885. It is offered as a contribution towards rectifying the deficit in the corpus of work on how newspapers have depicted teachers and points the way towards one of a number of avenues of research that other scholars in the field could take for various contexts (including different countries) and time periods.

The specific aim of the study is to provide a historical analysis of The West Australian newspaper’s representation of teachers over two decades. To that end, it examines the portrayal of teachers in its reporting of five major educational developments in the state of Western Australia that were the subject of sustained coverage at various times between 1987 and 2007: ‘unit curriculum’ (1987–1989), ‘industrial dispute’ (1995), ‘standardised testing’ (1997–2001), ‘teacher shortage’ (1997–2007), and ‘outcomes-based education’ (2005–2007). Although the study focused on The West Australian newspaper, the topics chosen reflect the international trends and universal issues in education.

The central argument of the study is that The West Australian’s coverage was dominated by both negative and sympathetic representations of schoolteachers, while positive representations were relatively rare. Overall, the coverage presented a less flattering image of teachers than that which emerges from the educational research literature, yet it provided a more balanced presentation of teachers than the extremes of “hero” and “villain” which tend to dominate popular culture. Its portrayal of teachers was generally consistent with that of other news media, with a movement towards a more sympathetic treatment in recent reporting reflecting a trend also identified in contemporary British newspaper coverage. Although the sympathetic coverage did recognize the challenges faced by teachers, it consistently presented teaching as a profession in a negative light. Across the coverage, there was almost a total absence of voices defending teaching or presenting it as an attractive career option. In addition, comments of any type from individual teachers were rare.

Overall, the book highlights the need for key media spokespeople in education––politicians, union representatives, bureaucrats and academics––to consider carefully the messages they want to send regarding teachers and teaching. It also points to implications for journalism education and journalism practice.

Tom O’Donoghue, an educational historian, is a Winthrop Professor n the Graduate School of Education at The University of Western Australia. He has a PhD in Education from The National University of Ireland. He is an elected Fellow of the Royal Historical Society and a Fellow of the Academy of Social Sciences in Australia. He is also a former President of the Australian and New Zealand History of Education Society. Professor O’Donoghue specializes in the history of education in the English-speaking world, with particular reference to the history of teachers and the process of education.

Chapter 5: The Introduction of Standardised Testing 1997–2001