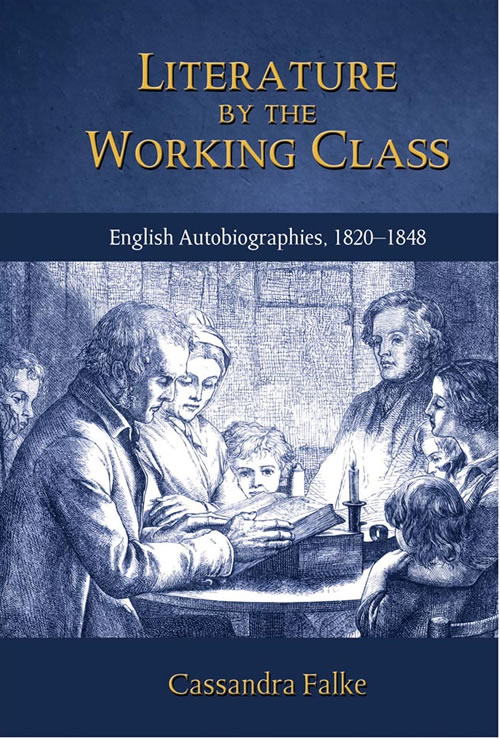 Literature by the Working Class: English Autobiographies, 1820–1848 by Cassandra Falke

"The close and insightful readings of these texts are a worthy contribution. ... Literature by the Working Class balances formal analysis of individual texts with larger questions about social and literary history, moving deftly from one to the other and intertwining them into a compelling argument. ... This treatment of working-class autobiography as intrinsically valuable as literature in its own right is welcome and long overdue." - Victorian Studies

By the 1820s, falling book prices and rising literacy rates had created England’s first literate working-class majority. These workers had read other people’s lives. They had read “the histories of heroes” and “histories of philosophers” as one artisan author puts it, but they looked in vain for an autobiography of a fellow “wealth producer.” Those who were born in the 1790s shared a revolutionary generation with Byron, Shelley and Keats, and they had seen their country’s industrialization first hand. Their lives were radically different than the lives their parents had lived, and they knew that they had their own stories to tell. Between 1820 and the defeat of Chartism in 1848, forty-eight men and women wrote or spoke their autobiographies, commemorating in their own words the cultural transition that accompanied England’s shift to an industrial capitalist economy. The outpouring of working-class lives was so dramatic that John Lockhart, writing in the Quarterly Review despaired that “England expect[ed] every driveller to do his Memorabilia.”

In Literature by the Working Class, Cassandra Falke provides a close literary analysis of five of these autobiographies, situating them in their historical and literary context but privileging each as a work of literature that deserves the same careful attention readers pay to other literary texts of the period. She has chosen works that represent the diversity of working-class life. One author, John Clare, so excelled at poetry that his work is now widely anthologized, but he was born an agricultural laborer, and he died in a madhouse. Another, Robert Blincoe, was orphaned at birth and sold into the nightmarish factory apprentice system. His contemporary, Timothy Claxton, was a gardener’s boy in the service of a great house. The lady of the house provided two years of education for him, and on that slim foundation, he built a successful career as a whitesmith and founded London’s first mechanic’s institute. Christopher’s Thomson trained as a shipwright, rambled the country as an actor and scene painter, and shuffled his wife and children from job to job and town to town until he finally settled down as a house painter. He rejects the social pressure to define his life according to his occupation and writes instead about pleasure, personal trials and community. The last autobiographer Falke considers, Thomas Carter, struggled to fulfill the period’s ideal for a working-class autodidact. From his overcrowded London garret apartment, in the voice of the anonymous working man, he encouraged fellow workers to persist in their education, and to maintain hope in the freedom of an active mental life even as their families, like his, struggled with hunger, cold, and child mortality. Viewing all of these stories together, Falke captures the richness of working-class culture, the bravery of these authors’ persistence, and the fecundity of their literary imaginations.

Literature by the Working Class proposes a way to read working-class autobiographies that attends to both the socio-historical influences on their composition and their value as individual literary works. Although social historians, reading historians, and historians of rhetoric have recognized the significance of working-class autobiography to the early nineteenth century, providing broad overviews of the genre, very little work has been done to read these works as literature.

Part of this negligence arises for the style of these autobiographies. They reject notions of autonomous selfhood and linear self-creation that characterize other Romantic period autobiographical works. While the critical understanding of autobiography as a narrative of rational progress toward occupational success and autonomous selfhood has been challenged by scholars working in a variety of periods and disciplines (feminist scholars, African-American scholars, early modern scholars, for example), nineteenth-century accounts of autobiography have yet to fully rewrite this master narrative, and thus have yet to account for an abundance of writing by workers. Working-class autobiographies have also been neglected because these authors learned that emotional expression and literary embellishment were not luxuries permitted for their class. In response, they write with the objective distance they imagine their readers to expect, or they record the difficulty of not feeling free to write their emotions. Their books, therefore, do not confirm the usual expectations for autobiography in the Romantic period.

Falke argues that the historical limits placed on working-class authors inspired them to try inventive literary techniques such as non-narrative autobiographies, non-chronological structure, and symbolic plots––techniques that autobiographers are being lauded for experimenting with today. Instead of looking for textual properties that working-class autobiographies share with more canonical works, she reads the ways that these texts re-imagine what autobiography can do. Not only does this kind of reading yield valuable insights about the texts themselves, it also helps revise and expand the understanding of the development of this crucial nineteenth-century form.

"The close and insightful readings of these texts are a worthy contribution. ... Literature by the Working Class balances formal analysis of individual texts with larger questions about social and literary history, moving deftly from one to the other and intertwining them into a compelling argument. ... This treatment of working-class autobiography as intrinsically valuable as literature in its own right is welcome and long overdue." - Victorian Studies

Cassandra Falke is associate professor of English at East Texas Baptist University and director of the University Scholars Program. She holds a PhD from the University of York (UK), an MLA from St. John’s College, and a BA from the University of Georgia. Dr. Falke’s previous publications include Intersections in Christianity and Critical Theory (ed.) and journal articles about romanticism, literary theory, and liberal arts education.

Chapter 3: Hints to Mechanics and Hints to Parliament

Chapter 4: Working-Class Readers and The Memoirs of a Working Man

The Not Quite Autonomous Artisan