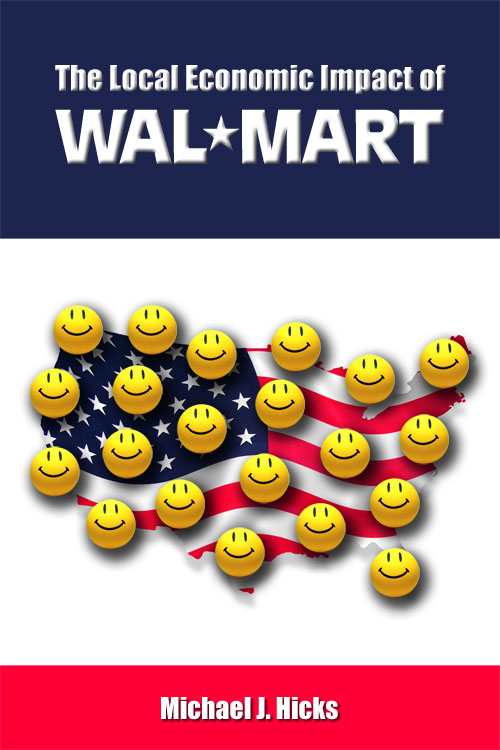 The Local Economic Impact of Wal-Mart by Michael J. Hicks

While there have been other books on Wal-Mart, none has provided scholarly economic analysis of the impact of this retail giant. This is the first book to fill this gap with a critical review of the existing literature; it also provides additional empirical evidence which highlight important questions.

Despite a proliferation of Wal-Mart related writing, the consensus among researchers is far less conclusive than either the critics or advocates of the retailer contend. This makes disentangling the effect of Wal-Mart on local economies increasing difficult.

While there have been other books on Wal-Mart, none has provided scholarly economic analysis of the impact of this retail giant. The Local Economic Impact of Wal-Mart is the first to fill this gap with a critical review of the existing literature; it also provides significant empirical evidence which highlights important questions.

This book will be a critical addition for all collections in Business, Economics, Political Science, and Sociology.

..."a valuable addition to the literature, with special value as a compendium of works on Wal-Mart." - Eastern Economic Journal

"[The author] is interested in facts. He asks the right questions and provides the answers that thorough research suggests. He surveys the weight of evidence and analysis in the existing literature, and adds some informed insights of his own. This is what good economists are supposed to do. There are no wild claims or hidden agendas here. This book is a triumph of empiricism over mysticism." - Lawrence W. Reed, President, Mackinac Center for Public Policy, Midland, Michigan

Michael J. Hicks is Director of the Bureau of Business Research and Associate Professor at Ball State University. Prior to this appointment, he was an Associate Professor of Economics at the Air Force Institute of Technology’s Graduate School of Engineering and Management. He was also a Research Professor at Marshall University and an Adjunct Scholar at the Mackinac Center for Public Policy.


Section I: The History and Measurement of Wal-Mart

Federal Law and the Growth of Chain Stores

Measuring the Impact of Wal-Mart

How to Interpret the Statistics in this Book

Some Economic Analysis of How Wal-Mart Locates Stores

Wal-Mart in Iowa: A Rigorous Examination of Stone’s Classic Work

The Structure and Spatial Distribution of the Retail Industry


Chapter Six – The Impact of Wal-Mart on the Aggregate Economy

An Examination of Washington and Economic Stability

The Research on Local Taxes and Wal-Mart

The Dynamics of Local Sales Tax Collections: Evidence from Maine

The Effectiveness of Tax Incentives to Wal-Mart

Wal-Mart and Subsidies in California

A Discussion of Antipoverty Programs

Some New Analysis of Wal-Mart and Medicaid Enrollment in Maryland


Chapter Ten – The Poor, the Philanthropist, and the Mom-and-Pop Store

Chapter Twelve – Wal-Mart and the Local Environment: Ghostboxes and Sprawl

The Law and Economics of the Wal-Mart Tax


Chapter Fourteen – On Loving and Hating Wal-Mart: A Summary and Policy Recommendations