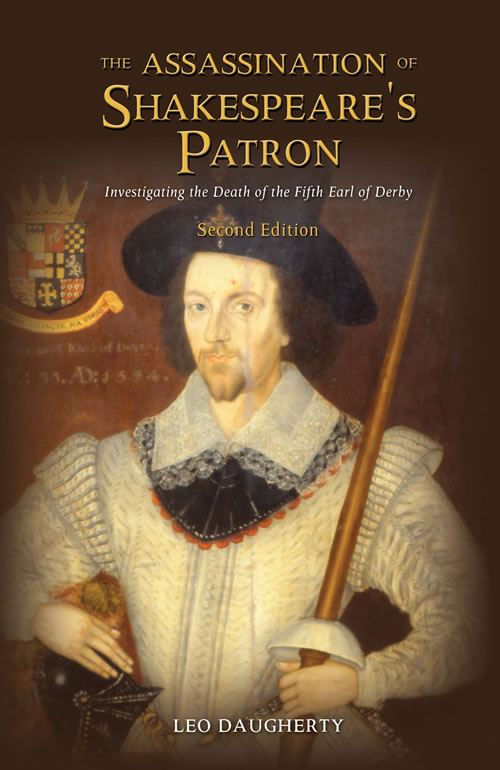 The Assassination of Shakespeare's Patron: Investigating the Death of the Fifth Earl of Derby (2nd Edition) by Leo Daugherty

“This study of Lord Strange’s murder is cogent and marked by deep knowledge of the Age of Shakespeare. The peripheral illumination of Shakespeare’s stage career is very valuable.” – Harold Bloom, Sterling Professor of the Humanities, Yale University

Lord Ferdinando Stanley was the fifth earl of Derby, a leading claimant to the throne. Considered a man who had everything, he was also the patron of the company of players which was fortunate enough to include William Shakespeare. At the time, Shakespeare was an up-and-coming junior member who had just begun to write plays for them––plays which were already the talk of London.

Lord Stanley was incalculably rich, having married one of the wealthiest heiresses in England. His home in Lancashire was called the “Northern Court” because of its grandness, surpassing any in England but (perhaps) the Queen’s own. Then one day, April Fool’s Day, 1594, he was reportedly approached by a witch (one of the famous legion of “Lancashire witches”) and they engaged in brief conversation while strolling outside his largest palace, Lathom Hall. Four days later, he fell violently ill. For twelve days he lingered, while four of the best doctors in the country, including the famous Dr. John Case of Oxford, labored in vain to save him.

Two of his retainers wrote gruesomely detailed accounts of the progress of his “diseases”––accounts that survive in manuscript today. When he died, Dr. Case was heard to murmur (as reported by Sir George Carey, the earl’s brother-in-law): “Flat poisoning. And none other but.” For months after his passing and interment, no one could get close enough to the family crypt to pay his or her respects because of an overwhelming stench that continued to emanate from his body.

The second edition of The Assassination of Shakespeare’s Patron includes additions stemming from new research into this very cold case. The most important substantive additions provide updated and corrected information about some of the major players in the story, particularly the warring Catholic and Puritan players, as well as the motives behind their actions. For example, important new biographical information is provided about Rev. William Leigh, the putative author of the officially accepted document (extant) attributing the death of Shakespeare’s patron to witchcraft, in spite of the fact that the eminent lead physician had proclaimed at his bedside at the time of death, within Chaplain Leigh’s hearing, that the cause was “flat poisoning, and nothing but.” The second edition uses new documentary evidence to show that the obscure Leigh was a Puritan witch-hunter who made the searching-out and subsequent execution of supposed witches his lifelong passion.

Who killed Lord Stanley and why? Historians started debating that question almost as soon as he died, and outraged gossip was to be heard everywhere in England. Some said the Jesuits abroad had commissioned the hit in retaliation for the earl’s refusal to be part of a Catholic plot a few months before to dethrone Elizabeth and crown him king. Some said the Catholics in Lancashire had done it for the same reason. Some said his wife had done it. Some said his brother (William, sixth earl, who immediately succeeded him) had done it. Some said the earl of Essex did it. A crazed “Doctor Hackett” in London was reported to have done it. In more recent times, some historians have charged William Cecil, Lord Burghley, with having ordered the murder. Several eminent physicians, writing recently in the British medical journal The Lancet, proposed arsenic as the method––as other physicians in England had declared earlier. No theory has ever taken hold and become dominant as to who did it and why. And some still hold to the possibility that “nobody did it”–– that the young earl died of natural causes––yet the doctors at his bedside proclaimed that they had never seen anything like this.

This second edition studies the death of Lord Derby within the immediate contexts of Elizabethan power politics, succession mania, passionate religious controversy, the records of prominent families in the North, and the cult of personality just then beginning to become a major factor in the nation’s social history. The book’s scope also includes subcultural contexts such as Elizabethan poetry (Lord Derby was a pastoral love poet, some of whose work survives), witchcraft, medicine, spy networks, and both approved and disapproved methods of political assassination (with poison being the most frowned upon because of its disreputable “Italianate” connotations).

The Assassination of Shakespeare’s Patron, second edition, surveys and analyzes the nearly 420-year-old documentary record relating to the death of Lord Derby, including all relevant original manuscripts, some of which have remained unprinted until now. This is the first study to piece together all these fragmentary, disparate scraps of information to form a coherent narrative––a story not just of the assassination of one of the most prominent persons of the fascinating “Age of Elizabeth” but also of European power politics as a whole during the last decade of the sixteenth century. It is also the first to offer a solution to the “murder mystery” that is based on original documents (most of them being heated back-and-forth letters written on the spot to and from the principals, both immediately before and immediately after the assassination).

This book will be of interest to all readers interested in Elizabethan history, literature, and politics, perhaps especially those who are interested in the dazzling major players of the age: Elizabeth, Essex, Lord Burghley, his son and successor Sir Robert Cecil, and the Stanleys of Lancashire––the latter so prominent in the early history plays of the young Shakespeare, who spun those plays in order to flatter his Stanley patrons.

"Leo Daugherty's dedicated and meticulous scholarship and research processes ... elucidates how the complex life and death of the Elizabethan, most known as Shakespeare's patron, was a lightning rod for the momentous political, cultural, and historical currents of the time. ... The book is useful in combining scholarly and investigative techniques with its attention to facts and details, and with the inclusion of seemingly unconnected aspects of the case/culture. ... The book represents the best aspects of primary research and historical scholarship." - Sixteenth Century Journal

"The author is a talented sleuth who knows a great deal about the case, and he has turned up some important finds ... a charmingly eccentric guide written by an enthusiast, which takes the reader along many fascinating paths and byways, providing genuine insight into the murky world of Elizabethan spying, plotting and counter-plotting." – Times Literary Supplement

“This study of Lord Strange’s murder is cogent and marked by deep knowledge of the Age of Shakespeare. The peripheral illumination of Shakespeare’s stage career is very valuable.” – Harold Bloom, Sterling Professor of the Humanities, Yale University

“Daugherty has solved one of the most perplexing and controversial mysteries of English history in a stylish, witty, and impeccably researched work.” – Catherine Canino, author of Shakespeare and The Nobility

“Leo Daugherty is the best literary detective I know. His discoveries here will change the ways we think about Shakespeare and his times.” – Steven Shaviro, DeRoy Professor of English, Wayne State University

Leo Daugherty is professor emeritus of literature and linguistics at The Evergreen State College, where he taught Shakespeare and other programs in Renaissance studies and also served as academic dean and founding head of the Science and Human Values division for many years. He now teaches at the University of Virginia. Dr. Daugherty holds a PhD from Texas A amp; M University, an MA from the University of Arkansas, and a BA from Western Kentucky University. He also completed his postdoctoral studies in linguistics at Harvard University and MIT. He has published essays and monographs on Shakespeare, the Elizabethan poet Richard Barnfield, and William Stanley, sixth earl of Derby. In addition to his book William Shakespeare, Richard Barnfield, and the Sixth Earl of Derby, he has also published studies of American writers, such as Cormac McCarthy and Allen Ginsberg. Dr. Daugherty is included on the lists of Who’s Who in America and Who’s Who in American Education.

Chapter 1: The Traditional Story, the Revisionist Story, and the Story

Chapter 2: And for the Golden Crown Award, the Winner Is …

Chapter 3: Richard Hesketh and Other Spies

Chapter 4: On the Road with Hesketh and Baylie

Chapter 10: “Bearing Himself so Haughtily Against my Lord of Essex”

Chapter 11: Ferdinando, Essex, and the Throne

Chapter 14: The Documents in the Case

Chapter 16: This for Witchcraft: “Touching the Death of the Earl of Derby”

Chapter 17: This for Public Consumption

Epilogue: On the Fleet Prison Night Watch with John Golborne