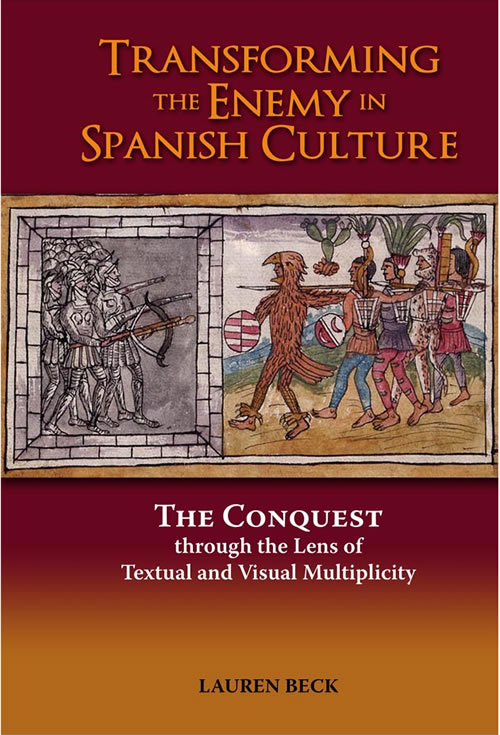 Transforming the Enemy in Spanish Culture: The Conquest through the Lens of Textual and Visual Multiplicity by Lauren Beck

"An exhaustive study. An examination both broad and deep. This work has been extensively researched. The appeal of this book should be broad and it should easily find a home on the bookshelf of the specialist, the student or just the interested reader in Latin American history, European history, comparative cultural studies, religious studies, or art. - Hispania

The identification and characterization of Spain’s enemies is a complex endeavor, not only because there have been many over the centuries but also because this set of enemies implies a set of protagonists, empires, wars, territories, incursions, and frameworks to organize them all into historical narratives.

This book demonstrates the evolution of Spain’s conceptualisation of its enemies, from biblical and Roman times to the early modern period, and it also illustrates how this transformative discourse became exercised upon Spain by its own enemies in Europe. Each chapter contributes to the study of multiplicity as both a problem to be studied as well as a scholarly methodology that anticipates the structure of the problem.

Conceived as a tightly knit series of case studies that sustain and strengthen these two particular arguments in a relatively chronological fashion, each chapter contributes to the study of multiplicity as both a problem to be studied as well as a scholarly methodology that anticipates the structure of the problem.

This interrogation of the integrity of primary sources, the effects of mass-production and the distribution of information, as well as the legacy that remains as a consequence of editorial intervention, reveals the almost universal establishment of a non-Spanish version of the Spanish conquest. That is, in the balance of multiple historical narratives about the conquest that possess lexical and structural nuances, two principal discursive strategies emerge.

This book is divided into three thematic sections, the first of which establishes the medieval roots for representing Spain’s early modern enemies. The two chapters that compose this section respectively explore the naming and visualization of an enemy that was almost entirely Muslim. The second section contains two chapters that explore the textual and visual references to Islam in the Americas during the conquest and early in the period of colonization. The last section contrasts the quality of information conveyed by archival and mass-produced texts. The first of two chapters notes that Muslims indeed did come to the Spanish Americas in the early modern period. The archival research prepared for this chapter contrasts with the mass-produced images and texts in the last chapter, and it is argued that different qualities of information are communicated by mass-produced, and therefore shaped, discourse, rather than by uncirculated, unarticulated texts. That is, out of the archives, a different picture of Islam in the Americas emerges. The final chapter examines how Spanish-authored chronicles became transformed through translation, and with the attachment of new illustrations, into propagandistic tools designed to undermine Spanish conquest and claims on land.

Transforming the Enemy in Spanish Culture identifies and illustrates the discourse imposed upon Spain’s enemies, and demonstrates how other Europeans used that same discourse to de-Occidentalize, disparage and criticize Spanish activities in the early modern period. Each chapter explores the implications of textual and visual multiplicity while questioning the impact multiplicity has had on the conceptualization of the conquest in more modern times.

Scholars of history and literature will appreciate different aspects of this book’s arguments. The former will encounter in-depth and copious archival sources about the conquest and its related themes, whereas the latter will enjoy the text-image and literary analysis of those aforementioned sources.

"Carefully researched and generously illustrated, Lauren Beck’s book offers a thorough study of primary sources, both textual and visual, on the cultural construction of the enemy in Spanish culture. ... The case of Spanish culture is particularly interesting because the Spaniards have been active in the creation of stereotypes of their enemies (e. g. the Islamization of Native Americans) and at the same time they have been the object of similar processes of cultural construction by other European nations." - Bulletin of Hispanic Studies

"An exhaustive study ... Exploring both textual and visual resources and both archival and mass-produced sources, and with a strong reliance on primary sources, Beck offers an examination both broad and deep. ... this work has been extensively researched... replete with several pages of bibliographical and explanatory endnotes and color and black-and-white plates depicting artwork, maps, charts, and other visuals in support of the study, and Beck accessed sources in languages as varied as Spanish, Portuguese, Latin, German, Dutch, Italian, English, and French. ... the book is presented in a very nice sturdy hardcover edition, something that is a bit of a rarity in today’s publishing climate. ... the appeal of this book should be as broad as its subject matter; it could easily find a home on the bookshelf of the specialist, the student or just the interested reader in Latin American history, European history, comparative cultural studies, religious studies, or art." - Hispania

Lauren Beck is an associate professor of Spanish and the head of the Department of Modern Languages and Literatures at Mount Allison University. She holds a PhD from the University of Western Ontario.

Chapter 3: From Edenic Indians to Muslim Aztecs: Transcribing Islam from the Old World to The New World

Chapter 4: Visualising Islam in the New World: The Crescent Moon and the Mosques Of Mexico, Peru And Brazil

Chapter 5: Transatlantic Travels of Muslims In the Sixteenth Century: The Sources

Chapter 6: De-Occidentalisation of the Conquest: The Examples of Las Casas, Herrera And Acosta