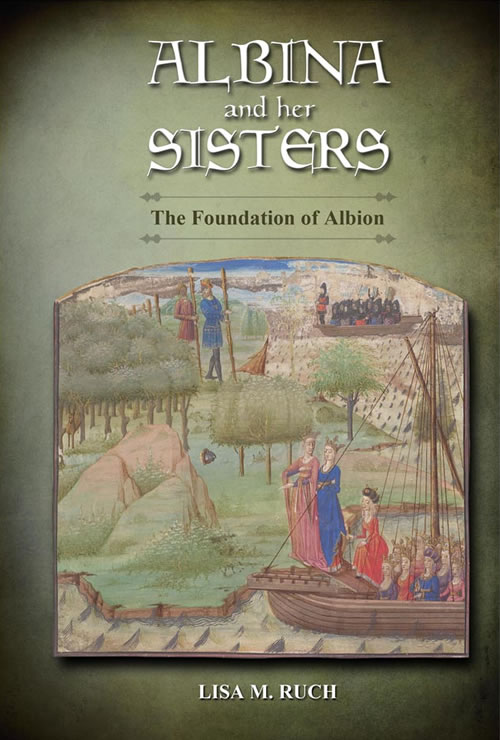 Albina and her Sisters: The Foundation of Albion by Lisa Ruch

This book provides the first-ever overview of the entire Albina tradition, from its roots to its eventual demise as a popularly accepted narrative.

This book is in the Cambria Studies in Classicism, Orientalism, and Medievalism series.

Many cultures, including Greeks, Romans, French, and British, have taken great pride in legends that recount the foundation of their society. This book demonstrates the contexts in which a medieval British matriarchal legend, the Albina narrative, was paired over time with a patriarchal narrative, which was already widely disseminated, leading to the attribution of British origins to the warrior Brutus. By the close of the Middle Ages, the Albina tale had appeared in multiple versions in French, Latin, English, Welsh, and Dutch. This study investigates the classical roots of the narrative and the ways it was manipulated in the Middle Ages to function as a national foundation legend. Of especial interest are the dynamic qualities of the text: how it was adapted over the span of two centuries to meet the changing needs of medieval writers and audiences.

The currency in the Middle Ages of the Albina narrative is attested to by its inclusion in nearly all the extant manuscripts of the Middle English Prose Brut, many of the French and Latin Bruts, and in a variety of other chronicles and romances. In total, there are over 230 manuscripts surviving today that contain versions of the Albina tale. Despite this, however, relatively little modern scholarship has focused on this widely disseminated and adapted legend.

This book provides the first-ever overview of the entire Albina tradition, from its roots to its eventual demise as a popularly accepted narrative. The Classical basis of the narrative in the Hypermnestra story and the ways it was manipulated in the medieval era to function as a national foundation legend are considered. Folkloric, biblical, and legal influences on the development of the tradition are addressed. The tale is viewed through a variety of lenses to suggest ways it may have functioned or was put to use in the Middle Ages. The study concludes with an overview of the narrative’s demise in the Renaissance.

Albina and her Sisters: The Foundation of Albion will be a useful reference source for medievalists and other scholars interested in chronicle studies, literature, folklore, foundation narratives, manuscript studies, and historiography. It will also be useful to art historians who wish to study the various depictions of the Albina narrative in illuminated texts. The tale’s emphasis on matriarchy and its subversion of the accepted societal norm will attract the interest of scholars in feminist studies. As the first analysis of the Albina tradition as a whole, it will be a valuable cornerstone for later studies.

Lisa M. Ruch is an associate professor of English and communications and chair of the Liberal Studies Department at Bay Path College. She holds a PhD from The Pennsylvania State University and an MA from Indiana University. She has published in several journals such as The Medieval Chronicle and Arthuriana, and she was a contributor to the Encyclopedia of the Medieval Chronicle.

Chapter 1. Virtue and Vice: Classical Roots and Medieval Analogues of the Albina Legend in the Danaid and Hypermnestra Traditions

Chapter 3. “Auncienes aventures”: The Major Branches of the Albina Tradition and their Offshoots

Chapter 4. “Les plus infortunees femmes”: Representational Functions of the Albina Narrative in the Middle Ages

Epilogue. “Monstrous error” or “fond invention”: The Waning of the Albina Narrative after the Middle Ages