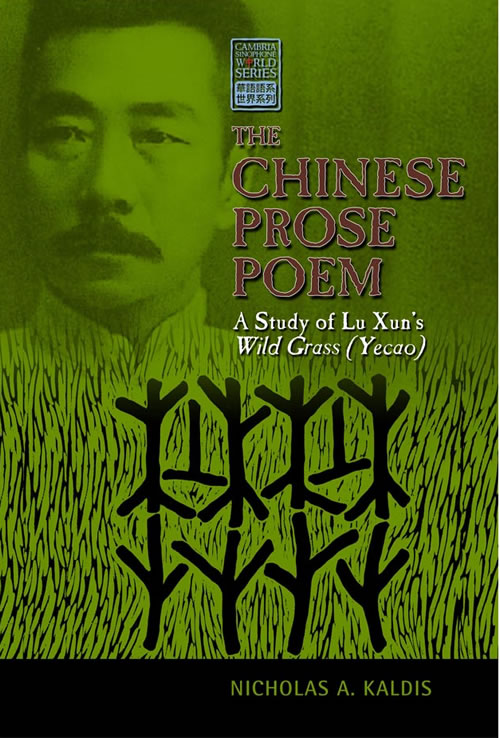 The Chinese Prose Poem: A Study of Lu Xun's Wild Grass (Yecao) by Nicholas A. Kaldis

"A comprehensive, well-balanced study ... Kaldis's analyses of many of the pieces are brilliant and insightful. His own prose style and argumentation are impeccable. ... As scholars, we have to be more than recorders of facts or appliers of methodologies. Kaldis's book is an example of how much can be achieved by combining careful scholarship with creative reading and inspired writing. Students, scholars, and anyone who is curious to learn more about Lu Xun should turn to this superlative work for many years to come."– CLEAR

*The exquisite woodcut image on the book cover is by Shu-Min Tung-Kaldis.

Yecao (Wild Grass, a.k.a. Weeds), is a 1927 collection of twenty-three prose poems written by Lu Xun (1881–1936), who is China’s foremost writer of the twentieth-century. The poems, written between 1924 and 1926, were first published serially in the journal Threads of Talk from 1924 to 1927. This prose poem collection —a literary masterpiece in the eyes of many— features some of Lu Xun’s most complex and psychologically dense creative works; Lu Xun himself is purported to have said his “entire philosophy is contained in his Yecao.”

Despite the significance attributed to this collection within Lu Xun’s literary corpus, until now there has not been a single comprehensive English-language study of Yecao. Part of the reason for this considerable gap in the scholarship can be attributed to the fact that fiction has been given primacy in most literary studies of Lu Xun, and prose poetry (sanwen shi) as a genre has generally not been well represented —if at all— in surveys, anthologies, and other collections of twentieth-century Chinese literature.

A related cause is Yecao’s generic uniqueness, which frustrates efforts to locate it within the canon of modern Chinese literature. Yecao also poses interpretive problems for its readers, because of its unprecedented experimental style (i.e., a lack of commensurability with familiar Chinese literary genres, traditional or modern) and the intricacy and variety of the prose poems, which are notable for their emotional intensity, complex paradoxical structures, symbolic density, sometimes-transparent references to contemporary historical events, and overall generic ambiguity. The combination of the above factors has led to this unique and exceptionally creative collection being frequently ignored or, at best, dealt with in a cursory and selective fashion in much of the English-language Lu Xun scholarship.

This study remedies the absence of a comprehensive English-language study of Lu Xun’s Yecao and is the perfect companion to the reading and study of Yecao. It is not only a useful reference work and bibliographical source but also an informative contribution to and dialogue with the extant scholarship. Most importantly, this study engages with the Yecao prose poems in a rigorous scholarly fashion while simultaneously allowing each prose poem to influence its reader and determine directions and conclusions made during the interaction of interpretation. This book deftly addresses in detail key aspects of context and content integral to interpreting Yecao.

As the first English-language companion to Yecao (providing bibliographical resources, historical context, background on the prose poem genre, an elaboration of Lu Xun’s mature aesthetic praxis and philosophical outlook), the book’s interpretations of Lu Xun’s prose poems will further aspire to bring Yecao and a psychoanalytically informed practice of close reading closer to the fore of Lu Xun studies specifically and Chinese literary studies in general.

Watch the short video with book reviews for this Cambria Press publication and related titles.

"A comprehensive, well-balanced study ... Kaldis's analyses of many of the pieces are brilliant and insightful. His own prose style and argumentation are impeccable. ... As scholars, we have to be more than recorders of facts or appliers of methodologies. Kaldis's book is an example of how much can be achieved by combining careful scholarship with creative reading and inspired writing. Students, scholars, and anyone who is curious to learn more about Lu Xun should turn to this superlative work for many years to come."– CLEAR

"A well-crafted, critical, and interpretive analysis of Lu Xun’s Wild Grass (Yecao). In addition to standing as its own critical interpretation, The Chinese Prose Poem is also a well annotated bibliographical reference for interpretations of Lu Xun’s prose poem collection. Nicholas A. Kaldis draws convincingly on the literary interpretive strategy of Walter A. Davis and is informed by Freudian psychology and Nietzschean symbolism (an interest of Lu Xun’s), which the author weaves into his close readings of Lu Xun’s prose poems themselves. ... Kaldis’ close readings of Yecao works use ample quotations with accompanying Chinese characters (which will be appreciated by Chinese-literate readers), discussions of Xun’s linguistic expressions, and his psychological and emotional states. The readings are well considered and complex, and Kaldis’ analyses and interpretive perspectives are clear and solid, engaging productively with Lu Xun’s intentionally difficult embrace of a language of paradox in Yecao." – Frontiers of Literary Studies in China

"As a reference work, the book fulfills its role by underlying the entire project with extensive scholarly apparatus. ... This extensive supplementary matter provides a rich fund of secondary observations, such as notes on translation, intertextual connections with Lu Xun’s other writings, and most prominently, background dialogue with the voluminous English- and Chinese-language studies of Yecao. Those studies alone represent a small sea of scholarship, all indexed in the book’s substantial sixty-page bibliography, a feat of compilation that stands as a scholarly resource in and of itself. Clearly, The Chinese Prose Poem is not aimed at the casual reader; but for that matter, neither was Yecao. ... As a whole, the close readings of the twenty-four poems remain true to Kaldis’s interpretive approach. He works with linguistic, structural, imagistic, and dramatic attributes intrinsic to each piece, directs us to important allusions to Chinese and western literature and philosophy, and frequently refers the Yecao poems to Lu Xun’s other writings, all done without losing sight of the existential-psychoanalytic interpretive framework developed in Chapter 1. The Chinese Prose Poem lives up to its promise as a scholarly reference and reader’s companion to some of Lu Xun’s most challenging and enigmatic work. Of equal importance, the book reaffirms the value of the close reading of literature, implicitly arguing, along with Lu Xun, that serious literature does matter and might change its readers for the better, given that those readers are willing to put in the effort of close, thoughtful analysis and reflection." – MCLC

Nicholas A. Kaldis is Associate Professor of Chinese Studies, Director of Graduate Studies, and Program Coordinator for Chinese Studies in the Department of Asian & Asian American Studies at Binghamton University (SUNY). He received his PhD and MA in East Asian Languages and Literatures from The Ohio State University, an MA from Purdue University, and a BA in English from Ohio University. He serves on the editorial boards of the Journal of Chinese Cinemas and Modern Chinese Literature & Culture (MCLC), and he is the Literature Book Review Editor for MCLC. His teaching and scholarship focus on the areas of Chinese cinema, literature, and language. Dr. Kaldis has published essays on modern Chinese literature, contemporary Chinese-language film, and numerous translations.

Chapter 3. In Search Of the Prose Poem