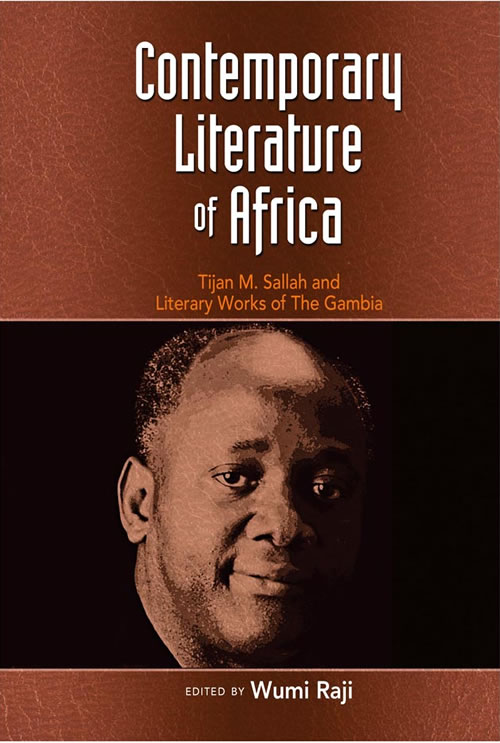 Contemporary Literature of Africa: Tijan M. Sallah and Literary Works of The Gambia by Wumi Raji

"Remarkably thorough, sophisticated, and precise. This collection will be useful to readers starting with those who have a general interest in the subject to serious scholars ... this book will serve as a defining text for many years to come given its pivotal position in the history of Gambian writing and to the quality of these essays that bring into bold relied the excellence of Sallah's writing."- Re-Markings

Contemporary Literature of Africa: Tijan M. Sallah and Literary Works of The Gambia focuses on a relatively neglected aspect of African literature. Tijan M. Sallah is a Gambian, and arguably the best known of the second generation of writers from that country. To date, he has published ten books: five collections of poetry, a volume of short stories, two edited anthology of poetry (the second one with Tanure Ojaide, the Nigerian poet), a literary biography of Chinua Achebe, the Nigerian novelist (coauthored with Ngozi Okonjo Iweala, currently Nigeria’s Minister of Finance), and an ethnographic book on Wolof, the dominant ethnic group of the Senegambian people.

Tijan M. Sallah won the Francis Hutchins award for literature in Berea College. Lenrie Peters, arguably the best-known Gambian author, and mentor to most members of the country’s second-generation of writers including Sallah himself, Ebou Dibba, Nana Grey-Johnson, Sheriff Sarr and Gabriel Roberts, described Sallah as the most prolific, the most consistent, and the most original Gambian writer of his generation. This opinion is widely shared; for example, in reviewing Sallah’s When Africa was a Young Woman for World Literature Today, Charles Larson, the American scholar of African literature, opined that “there is little question about Sallah’s talents.” Sallah writes using simple, accessible language but also demonstrates his adventurous side in his works (e.g., “Harrow Poems” in which he experiments with rhymes and quatrains).

Gambian literature has suffered some neglect in African literary criticism. The reason for this lies in the erroneous belief that the country has produced little that is worthy of serious scholarly attention. To be sure, there already exists a fairly substantial body of critical works on the writings of Tijan Sallah; and many of them, again, are by well-known names in the field of literary criticism. Some of these scholars are Charles Larson, Tanure Ojaide, Emmanuel Obiechina, Ezenwa Ohaeto, Gareth Griffiths, Samuel Garren, Victoria Arana, Stewart Brown, Odun Balogun, Peter Nazareth, Ali Malhani, and Siga Fatima Jagne. As insightful as these writings are however, it is not often easy to access them, scattered as they are in disparate journals, edited books, and compendiums of essays. This book fills the gap by as the first book-length critical study both on Tijan M. Sallah and Gambian literature.

The first part of the book delves into the background of the literature with a discussion of works by leading Gambian authors, including Lenrie Peters, Ebou Dibba and then Tijan Sallah. The core of the book then turns the focus on the works of Tijan Sallah. These chapters explore his growth and development as a writer and provide critical analyses into his major works. While some of the chapters take the works together in general thematic and stylistic discussion, others focus on specifically selected works, analyzing and studying them closely. At least two of the chapters adopt a specifically linguistic approach; another two locate the works within the trend of ecopoetry, an emerging genre of nature poetry; one explores Sallah’s poems of convalescence, pointing out the therapeutic nature of the writings; and yet another employs the theory of phenomenology in carrying out an investigation of Sallah’s poetry in comparison with the works of other major African poets. The final chapter is a detailed interview conducted with Sallah. It sheds light on his life, his Gambian background, and how this affects and influences his writings.

Contemporary Literature of Africa: Tijan M. Sallah and Literary Works of The Gambia is important for all those interested in Gambian and African literatures, postcolonial writings and world literatures in general.

"Remarkably thorough, sophisticated, and precise. This collection will be useful to readers starting with those who have a general interest in the subject to serious scholars ... this book will serve as a defining text for many years to come given its pivotal position in the history of Gambian writing and to the quality of these essays that bring into bold the excellence of Sallah's writing."- Re-Markings

PART I: Gambian Literature – A Background

Chapter 3. Themes and Styles in the Poetry of Tijan M. Sallah (Pierre Gomez)

Chapter 7. Return to Roots: Dialectics of Cultural Development in the Poetry of Tijan Sallah (Sylvie Coly)

Chapter 9. Exile and Return: The Poetry and Fiction of Tijan Sallah (Samuel Garren)