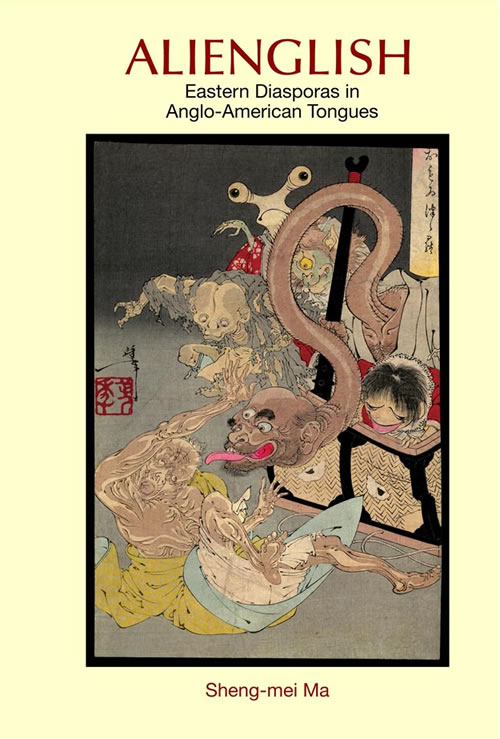 English has long emerged as the lingua franca of globalization but has been somehow estranged in the hands or mouths of aliens, from Joseph Conrad to Chang-rae Lee. Haltingly, their alien characters come to speak in the Anglo-American tongue, yet what emerges is skewed by accents, syntax, body language, and nonstandard contextual references—an uncanny, off-kilter language best described as Alienglish. Alienglish arrays itself on a spectrum from English’s Alien to Alien’s English, from white representations of the Other to aliens’ self-representations.

English has long emerged as the lingua franca of globalization but has been somehow estranged in the hands or mouths of aliens, from Joseph Conrad to Chang-rae Lee. Haltingly, their alien characters come to speak in the Anglo-American tongue, yet what emerges is skewed by accents, syntax, body language, and nonstandard contextual references—an uncanny, off-kilter language best described as Alienglish.

Either an alien’s English that estranges or an alienating English because it sounds so natural, it issues forth from an involuntarily forked tongue and split psyche, operating on two registers, one clear and comprehensible, the other occluded and unfamiliar. Alienglish hence diagnoses the literal split in language or the alien’s English; it further suggests the metaphorical splits either of aliens in an English-speaking world or of the English language dubbing and animating an alien world.

While such alien performances are largely ventriloquized by native writers in the name of aliens, most blatant of which are Western Orientalism and ethnic self-Orientalism, there were and still are exceptional nonnative writers in Anglo-American tongues, as a direct consequence of Eastern diasporas to the nineteenth-century British Empire and then to the twentieth-century U.S. Empire. These writers include Joseph Conrad, Vladimir Nabokov, Jerzy Kosinski, Kazuo Ishiguro, Maxine Hong Kingston, Chang-rae Lee, and Ha Jin, who all seem to share a predicament: the strange English tongue they belabor to host in an effort to feel at home in the Anglo-American host culture as well as in their own bodies deemed foreign bodies. Wherever one hails from, an alien with a tongue graft is doomed to be either a tragic outcast or a pathetic clown, caught between two irreconcilable languages and cultures, searching for an identity in English yet haunted by a phantom tongue pain.

That all the aforementioned names are followed by foreign names in the writers' own mother tongues signals that early identities are parenthesized, even bumped off by Anglicized selves. These pairs of Dr. English and Mr. Alien point to an increasing dilemma of global Anglo-American tongue. Faced with that puzzle, Alienglish suspends itself between, at one end, the narrowest definition of the alien tongue and linguistic switching and, at the other, the broadest definition of cultural estrangement. Between the two poles lies a gradation of modern and contemporary tongue-twisters and contortionists, some foreign(-looking) bodies wrestling with English, others English speakers behind accents and masks. Alienglish therefore, fans out in the exact contour of Eastern diasporas, flung by the wind of necessity and chance, to investigate “the English” dreaming of aliens and aliens’ nightmare (aliens as nightmare?) in the belly of the West.

The book’s methodology fuses the scholarly with the poetic, a montage that springs from the very nature of diaspora, which is as much about rational decisions of relocation as, put simply, feelings. The heart of diaspora, breaking like a cracked voice, is resealed by the head, making both stronger—until another thin line opens up. Only through this double helix of head and heart, thinking and feeling, can one hope to map the DNA of diaspora. Such an unorthodox mélange balances the tongue as a cultural expression from the body and the tongue as a visceral reaction of the body. Any potential crack amid the superstructure of global English and its underside of alien tongues promises discovery of a new world, which has always been there. Alienglish hence arrays itself on a spectrum from the English’s Alien to the Alien’s English, from white representations of the Other to aliens’ self-representations. The usual Orientalist suspects of Charlie Chan, Fu Manchu, and Gilbert and Sullivan swell to capture affectless aliens from sci-fi, Stieg Larsson, and Lian Hearn. The book then turns to images of Shanghai and Macau, Asian Canadian Joy Kogawa and Evelyn Lau, and the Virginia Tech shooter Seung-Hui Cho. It concludes with an examination of the new China hands (Ha Jin, et al.) and the global media’s search for the sublime.

The title of this book Alienglish appropriately conveys the uniqueness of this book, which will be a useful contribution to Asian and Asian American studies, comparative literature, diaspora studies, film studies, popular culture, and world literature.

Chapter 7. The Bund Burning Upside Down on Water: Shanghai Obscura in von Sternberg, Zhang, and Ishiguro

Chapter 9. Two Canadian pAsians: The Rapture of Rape in Kogawa and Lau?