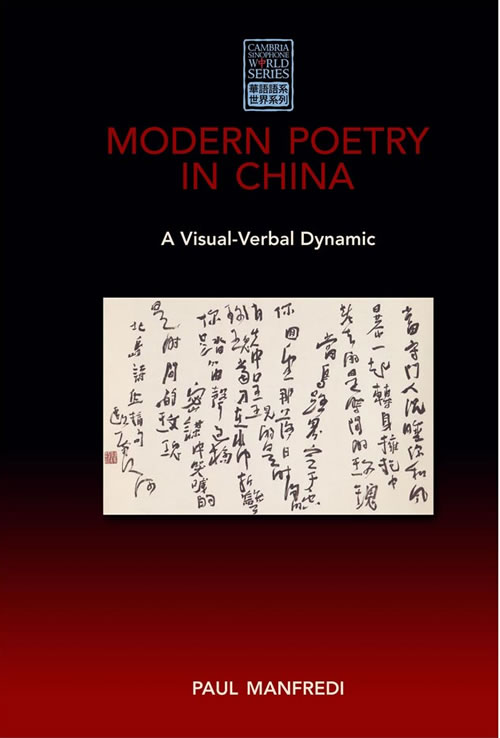 Modern Poetry in China: A Visual-Verbal Dynamic by Paul Manfredi

"Manfredi’s book contains a wealth of contextualizing detail and focused reading/argument ... Modern Poetry in China is a very well-written, researched, illustrated and convincingly argued book that will no doubt be read widely among those with a specialist interest in Chinese literature and traditional culture. It is a text that challenges rigid distinctions between the verbal and the visual, not simply through theoretical appeals but also thoroughly grounded historical analysis." – Journal of Contemporary Chinese Art

Chinese poetry, along with many other art forms in China, underwent a highly self-conscious transformation in the first decades of the twentieth century. Poetry, perhaps more than any other art form, did so under the heavy burden of a voluminous literary precedent, a precedent which was in its very format of patterned words inscribed on scrolls––a mark of the Chinese literati tradition. Turning away from this tradition seemed necessary in the context of a political, social, and cultural reform movement (which was designed to strengthen China in the face of increasing international pressure as well as domestic breakdown). At the same time, reforming a poetic tradition which had served as a principal touchstone of aesthetic accomplishment––from its role in Confucian canon as object of contemplation for correct action, to its function as a test of candidate's qualifications to govern through the civil service examination, to its function as national past-time in all manner of social gathering––was a major challenge.

The result of such a predicament for poets throughout the twentieth century has been the compulsion to discover a poetic style which resonates with the modern world and yet is rooted in Chinese cultural experience. One way in which poets have been able to accomplish this is by relying on poetry's visuality, be it in the graphic properties of the writing system itself, the visual context of the presentation of the poetic texts, or the acute image details in the poems.

The history of approximately one century of modern Chinese poetry production has been addressed broadly in scholarship, but such broad strokes tend to miss important dynamics which fall outside of general narratives. The importance of Chinese visual tradition to modern Chinese poets is a good case in point. Accordingly, this book addresses specific manifestations of the nexus connecting modernity and visuality in Chinese poetry. It begins with a discussion of May Fourth poetics as exemplified in the groundbreaking work of Li Jinfa, China's first "Symbolist" poet. From there the book traces notable developments of visuality in the new form or free verse writing (called Xinshi or "New Poetry") through mid-century modernist experiments in Taiwan (focusing on Ji Xian). From there the book then explores the avant-garde poetry of Luo Qing and Xia Yu before returning to mainland Chinese developments of Misty poets Yan Li and his contemporaries. The work concludes with a wide variety of poet-artists writing and exhibiting in the twenty-first century.

Looking across this period of modern Chinese poetry's development, one is able to observe how important the visual-verbal dynamic has been to the innovation of poetic style and method. From the twenty-first century on, such multi-media expressions will likely continue to grow; this is a function of a Chinese aesthetic tradition pairing word and image and will continue to manifest in new and more inventive ways.

This is an important book for Asian literary and art history studies and history collections.

Watch Dr. Victor Mair , general editor of the Cambria Sinophone World Series speak about the book (starting at 3:13 mark) on behalf of the author at the AAS 2014 annual conference!

"Manfredi’s book contains a wealth of contextualizing detail and focused reading/argument ... Modern Poetry in China is a very well-written, researched, illustrated and convincingly argued book that will no doubt be read widely among those with a specialist interest in Chinese literature and traditional culture. It is a text that challenges rigid distinctions between the verbal and the visual, not simply through theoretical appeals but also thoroughly grounded historical analysis." – Journal of Contemporary Chinese Art

Paul Manfredi is Associate Professor of Chinese and Chair of the Chinese studies program at Pacific Lutheran University. He earned his PhD in East Asian Languages and Cultures and a dual-MA in East Asian Studies and Comparative Literature from Indiana University. His articles about modern Chinese poetry and visual art have appeared in Modern Chinese Literature and Culture, Journal of Modern Literature in Chinese, and Yishu: Journal of Contemporary Chinese Art among other publications. Dr. Manfredi also maintains the China Avant Garde blog.

Chapter 2. Ji Xian: Self to Self-Portrait