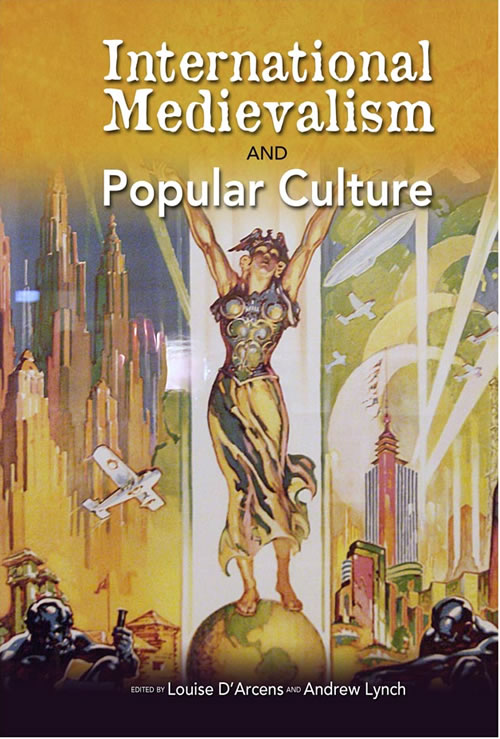 Traversing this transhistoric and crosscultural domain, International Medievalism and Popular Culture presents current considerations of multitemporality with new articulations of how medievalism participates in and expresses a range of international perspectives. In doing so, this study also traces the cultural dynamics of medievalism as it has appeared in various colonial environments, and it analyzes the hybrid forms even apparently nationalist medievalism has taken when transplanted into non-European soil. It engages with a medievalism that is “popular” not only in the sense of garnering a wide international audience, but as emerging within mass commodity culture and the contemporary global mediasphere.

This book is in the Cambria Studies in Classicism, Orientalism, and Medievalism book series (general editor: Nickolas A. Haydock, University of Puerto Rico, Mayagüez).

Medievalism––the reception and imaginative recreation of the Middle Ages in modernity––has had a surprisingly vital presence in popular representations of international and global culture. Earlier accounts of medievalism emphasised its emergence out of European nationalist agendas. By contrast, contemporary medievalist studies are turning increasingly to the examination of cultural practices in which geographical, cultural and historical demarcations are brought into question. Medievalism is now recognized as a rich and expanding domain in which historical epochs are co-present and national cultures are problematized, sometimes even as they are invoked. The “popular Middle Ages” has traveled a long way from its nationalistic origins, entering a realm where “national”, “postcolonial”, “transnational”, “international, and “global” all become terms that require as much revisitation and renegotiation as that most slippery of all terms, “the medieval”. In the realm of popular culture, the international profile of medievalism refers not only to the global consumption of the medieval past in the postmedieval present, but also, in many cases, to how the Middle Ages themselves are represented in many popular cultural forms.

Traversing this transhistoric and crosscultural domain, International Medievalism and Popular Culture presents current considerations of multitemporality with new articulations of how medievalism participates in and expresses a range of international perspectives. In doing so, this study also traces the cultural dynamics of medievalism as it has appeared in various colonial environments, and it analyzes the hybrid forms even apparently nationalist medievalism has taken when transplanted into non-European soil. It engages with a medievalism that is “popular” not only in the sense of garnering a wide international audience, but as emerging within mass commodity culture and the contemporary global mediasphere.

Today medievalism is increasingly intelligible as a cultural lingua franca, produced in trans- and international contexts with a view to reaching popular international audiences, some of mass scope. This book offers new perspectives on international relations and how global concerns are made available through contemporary medievalist texts. It questions how research in medievalism may help us rethink the terms of internationalism and globalism within popular cultures, ideologies, and political formations. It investigates how the diverse media of medievalism (print; film and television; arts and crafts; fashion; digital media; clubs and fandom) affect its cultural meaning and circulation, and its social function, and engage questions of desire, gender and identity construction.

As a whole, International Medievalism and Popular Culture differs from those studies which have concentrated on imaginative appropriations of the middle ages for domestic cultural contexts. It investigates rather how contemporary cultures engage with medievalism to map and model ideas of the international, the trans-national, the cosmopolitan and the global. This book includes examples from Europe, Britain, North America, Australia and the Arab world. It discusses the formation and the impact of popular medievalism in the globalised worlds of Braveheart, Disney and Harry Potter, but it also explores how the contemporary medieval imaginary generates international cultural perspectives, for example in considering Middle Eastern reception of Ridley Scott’s Kingdom of Heaven, the Byzantinism of Julia Kristeva, and Hedley Bull’s postnationalist ‘new medievalism’.

International Medievalism in Popular Culture is an important contribution to medieval studies, cultural studies, and historical studies. It will be of value to undergraduate, postgraduate and academic readers, as well as to all interested in popular culture or medievalism.

Louise D’Arcens is an associate professor in the English Literatures Program at the University of Wollongong. She holds a PhD and a BA (Hons) from the University of Sydney. Dr. D’Arcens’ previous publications include Old Songs in the Timeless Land: Medievalism in Australian Literature 1840-1910 and Maistresse of My Wit: Medieval Women, Modern Scholars. She has published in numerous journals, including Representations, Screening the Past, Parergon, and Postmedieval. Dr. D’Arcens also holds a Future Fellowship from the Australian Research Council.

Andrew Lynch teaches in English and Cultural Studies at The University of Western Australia and is Director of the UWA Centre for Medieval and Early Modern Studies. His publications include Malory’s Book of Arms, edited collections, and articles and chapters on medieval and medievalist literature in Britain, the USA and Australia. With Helen Dell and Louise D’Arcens he coedited postmedieval 2.2 (2011): 'The Medievalism of Nostalgia'.

Chapter 1. Foreword: Just Like Life: The Popularity of Medievalism

Chapter 2: The Medieval, the International, the Popular: Introduction

Chapter 4: The Fate of Reality in Medievalist Fantasy Fiction: Harry Potter and the Christian Right

Chapter 5: Coming Home: International and Domestic Medievalism in the Films of Ridley Scott

Chapter 6. The Middle Ages and the Arab Spring: Medievalism and the Built Environment in the Modern Middle East

Chapter 7: Medievalism on the Streets: Tinsmiths, Knights, and the International Labor Movement

Chapter 10: The Girl in the Forest: Medievalism as Feminist Imaginary

Chapter 11: Mateship in the Middle Ages: The Australianness of William Wallace, William Thatcher, and Robin Longstride

Chapter 12. Here Be Dragons: Mapping Medievalisms for the Young

Chapter 13: Swords in Stones / Ladies in Lakes: Revision and Legendariness in Arthurian Medievalism