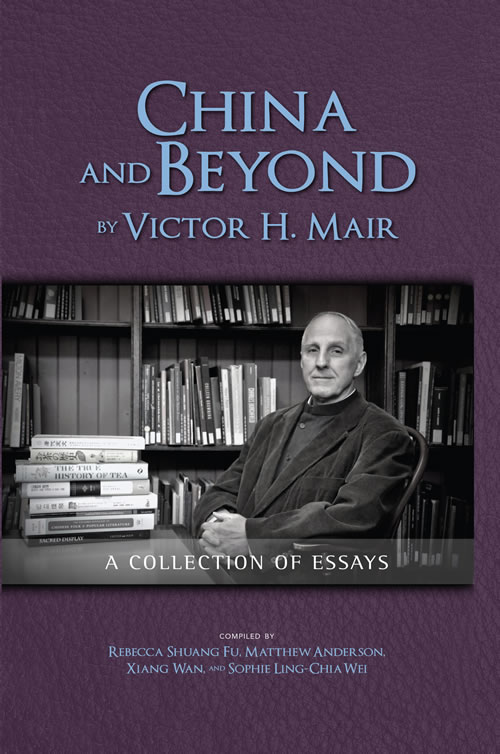 China and Beyond (Special Paperback Edition): A Collection of Essays by Victor H. Mair

In this impressive collection, twelve of Victor Mair’s essays were carefully selected with the intention to show a clear picture of the development of his brilliant scholarship by including pieces from different phases of his career. This rare collection showcases Dr. Mair’s expertise in Medieval Chinese literature (especially in vernacular literature which was greatly influenced by exotic Buddhism), his insightful grasp of the cultural interactions between China and its neighbors (including India, Iran, and the ethnic groups to the south of China), and his significant contributions to philosophy and archeology.

Unquestionably one of the greatest scholars in Asian studies, Victor H. Mair could earn this widely recognized status based on his scholarly accomplishments in the last decade alone. His vast number of scholarly works, which cover such dazzling breadths and depths (from Sinology to the Tarim mummies), are influential and renowned.

However, Dr. Mair’s significant contribution to scholarship began much earlier, and it is critical that his earlier works––which will be highly valuable to generations of scholars––are not lost and duly preserved. As such, to honor Dr. Victor Mair at his surprise 70th birthday bash, his doctoral students (Rebecca Shuang Fu, Matthew Anderson, Xiang Wan, and Sophie Wei) have compiled a collection of his earlier works which are not as well-known because they are not as accessible as his later works. For example, some of these essays have never been preserved digitally, making their inclusion in this book all the more important.

In this impressive collection, twelve of Dr. Mair’s essays were carefully selected with the intention to show a clear picture of the development of his scholarship by including pieces from different phases of his career. The first three chapters showcase Dr. Mair’s expertise in Medieval Chinese literature, especially in vernacular literature which was greatly influenced by exotic Buddhism. Chapter 4 to Chapter 9 demonstrate his insightful grasp of the cultural interactions between China and its neighbors (including India, Iran, and the ethnic groups to the south of China). The last three chapters highlight Dr. Mair’s brilliant contributions to philosophy and archeology.

Even though this rare and unprecedented collection is more than 500 pages long, it should be noted that this is by no means a comprehensive coverage of Dr. Mair’s research. If anything, considering the quantity and quality of his work, this is but a small sampling! However, this collection is nonetheless extremely valuable because scholars now have in one volume a resource that reveals the trajectory of Dr. Mair’s research as well as the insights he brought forth, establishing him as an innovator who is always in the vanguard of scholarship.

China and Beyond by Victor H. Mair is an essential resource––a definite must-read title–– for scholars not only for the illuminating essays but also because it stands out as an extraordinary example of how one scholar has successfully crossed over different fields and seamlessly interwoven them.