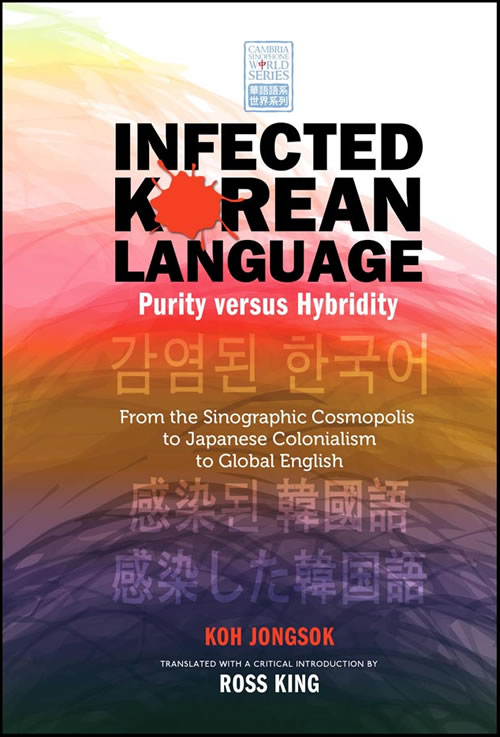 Infected Korean Language, Purity versus Hybridity: From the Sinographic Cosmopolis to Japanese Colonialism to Global English by Koh Jongsok and Ross King

"Ross King’s new translation of Koh Jongsok’s collection of linguistic essays is a timely and welcome addition to the growing body of work available in English questioning the dominant narrative of Korean linguistic homogeneity or 'purity." —British Association of Korean Studies

Although numerous book-length studies of language and modernity in China and Japan can be found even in English, little has been written in any language on the question of linguistic modernity in Korea. Infected Korean Language, Purity Versus Hybridity by noted journalist and writer Koh Jongsok is a collection of critical essays about Korean language and writing situated at the nexus of modern Korean history, politics, linguistics, and literature. In addition to his journalistic and writing experience, Koh also happens to have a keen interest in language and linguistics, and he has received postgraduate training at the highest level in these subjects at the Sorbonne. This book bears witness to the trials and tribulations—historical, technical and epistemological—by which the Korean language achieved “linguistic modernity” under trying colonial and neo-colonial circumstances. In particular, Koh tackles questions of language ideology and language policy, modern terminology formation, and inscriptional practices (especially the highly politicized questions of vernacular script versus Chinese characters, and of orthography) in an informed and sensitive way.

The value of Koh’s essays lies in the fact that so little has been written in a critical and politically progressive vein—whether scholarly or otherwise—about the processes whereby traditional Korean inscriptional and linguistic practices became “modern”. Indeed, the one group of academics from whom one would expect assistance in this regard, the “national language studies” scholars in Korea, have been so blinkered by their nationalist proclivities as to produce little of interest in this regard. Koh, by contrast, is one of precious few concerned and engaged public intellectuals and creative writers writing on this topic in an easily understandable way. Little or nothing is available in English about modern Korean language ideologies and linguistic politics.

This book analyzes the linguistic legacies of the traditional Sinographic Cosmopolis and modern Japanese colonialism and shows how these have been further complicated by the continued and ever-more hegemonic presence of English in post-Liberation Korean linguistic life. It exposes and critiques the ways in which the Korean situation is rendered even more complex by the fact that all these issues have been debated in Korea in an intellectual environment dominated by deeply conservative and racialized notions of “purity”, minjok (ethno-nation) and kugo or “national language” (itself an ideological formation owing in large part to Korea’s experience with Japan). Koh sheds light on topics like: linguistic modernity and the problem of dictionaries and terminology; Korean language purism and the quest for “pure Korean” on the part of Korean linguistic nationalists; the beginnings of literary Korean in translation and the question of “translationese” in Korean literature; the question of the boundaries of “Korean literature” (if an eighteenth-century Korean intellectual writes a work of fiction in Classical Chinese, is it “Korean literature”?); the vexed issue of the “genetic affiliation” of Korean and the problems with searches for linguistic “bloodlines”; the frequent conflation of language and writing (i.e., of Korean and han’gul) in Korea; the English-as-Official-Language debate in South Korea; the relationship between han’gul and Chinese characters; etc.

"Ross King’s new translation of Koh Jongsok’s collection of linguistic essays is a timely and welcome addition to the growing body of work available in English questioning the dominant narrative of Korean linguistic homogeneity or 'purity.' Koh is considered the leading exponent of the uniquely Korean form of writing known as ono pip’yong (language criticism), nine examples of which make up this book. They are translated into precise, readable prose by Ross King, an experienced translator of Korean linguistics and literature ... This collection is an excellent, if polarising, introduction to many of the more controversial issues in contemporary Korean language studies. Despite perhaps niche subject matter, Koh’s personal delivery and consistent focus on the bigger picture serves to make this accessible and relevant to those with any interest in contemporary Korean society and identity, particularly their interaction with language." —British Association of Korean Studies

“This is wonderful work in an overlooked area. The scholarship is brilliant, innovative, and highly specialized––one must be well prepared in modern Korean, premodern Korean, and Chinese to undertake such a work. This is a real masterpiece!” —Mark Arlen Peterson, Brigham Young University

Jongsok Koh is a well-known South Korean essayist, novelist, critic and public intellectual. After earning his BA in 1983 from Sungkyunkwan University in Seoul in Law, he went on to earn an MA in Linguistics from Seoul National University in 1986. He then worked briefly for some years as a journalist, but in 1992 he went to Paris to pursue a PhD in Linguistics at the École des Hautes Études en Sciences Sociales. That particular project was cut short by the eruption of the IMF financial crisis in Korea, and he returned to Seoul in 1997 (sans PhD). Subsequently he worked as a columnist for the Han’guk Ilbo (Korea Times) until 2005, and as a freelance writer until 2013, when he announced his retirement as a professional writer. Though highly regarded as a writer of creative fiction, Koh is also the leading exponent of ono pip’yong or ‘language criticism’, a unique form of critique, in Korea.

Ross King is Professor of Korean studies and Head of the Department of Asian Studies at the University of British Columbia (UBC) in Vancouver, Canada. He earned his BA in Linguistics (Japanese and Korean) from Yale and his PhD in Linguistics from Harvard University. Dr. King’s research focus is on the history of language, writing and literary culture in the Sinographic cultural sphere, with a specific focus on medieval Korea and the interplay of cosmopolitan and vernacular in other regions of the Sinographic cosmopolis. He is the coauthor of Elementary Korean and Continuing Korean, a popular textbook series for the teaching of Korean as a foreign language, as well as of the extensive web teaching and learning resources for Chinese, Japanese and Korean developed by UBC Asian Studies. Dr. King has also pioneered the study of the history and language of the ethnic Korean minority in the former Soviet Union. Professor King founded Sup sogui Hosu, the Korean Language Village at Concordia Language Villages, in Bemidji, Minnesota in 1999. He continues to serve as Dean Emeritus and Senior Advisor of the Village in the summers.

Preface to the Revised Edition

Chapter 1. A Clumsy Confession of Love: In Lieu of a Preface

Chapter 2. A Footnote to My Confession

Chapter 4. Contamination, Infiltration, Hybridity: A Swipe at Purism in Korean

Chapter 5. We are all Greeks: On the English-as-Official-Language Debate

Chapter 9. On the peripheries of Sogyong pyolgok: “Song of the Western Capital”