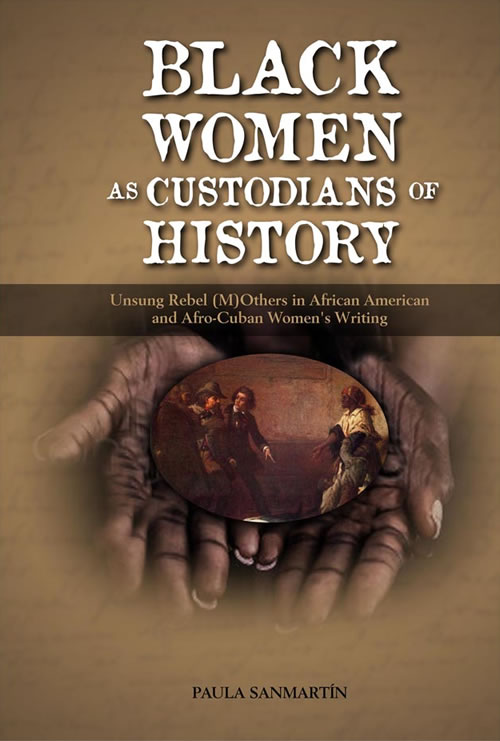 This book is in the series Slavery: Past and Present by Ana Lucia Araujo (Howard University).

An increasing number of publications in the area of African diaspora studies has resulted in this field gaining much literary and critical attention in the last decades. In addition the fields of Afro-Hispanic studies and Caribbean criticism, as well as New World studies, are redefining the Americas as an object of research. Within this context, and responding to black women’s relegation to one of the last places on the list of historical interlocutors, black feminist criticism has emphasized the importance of the literature written by black women in the task of reexamining their role in history. Following this thread, several recent critical works on African American and Afro-Caribbean women writers have discussed black women’s rewritings of history, especially the prevailing theme of contemporary literary revisions of slavery.

However, there is a lack of studies that, while participating in familiar trends and contemporary critical tendencies, link together several subject matters in order to demonstrate the possibilities of joint research between black women’s literatures of the Americas. Indeed, to date there is no book-length study concentrating on black female authors from the United States and the Spanish Caribbean. Books on women authors from the Caribbean and comparative studies of the Black Diaspora often tend to focus on Anglophone writers, and scarce critical attention is given to black women authors in the field of Afro-Hispanic studies.

Black Women as Custodians of History is thus an essential addition to the study of comparative black literature of the Americas; it will also fill the gap that exists on theoretical studies exploring black women’s writing from the Spanish Caribbean. This book examines literary representations of the historic roots of black women’s resistance in the United States and Cuba by studying the following texts by both African American and Afro-Cuban women from four different literary genres (autobiographical slave narrative, contemporary novel on slavery, testimonial narrative, and poetry): Incidents in the Life of a Slave Girl (1861) by the African American former slave Harriet Jacobs, Dessa Rose (1986) by the African American writer Sherley Ann Williams, Reyita, sencillamente: testimonio de una negra cubana nonagenarian [Simply Reyita. Testimonial Narrative of a Nonagenarian Black Cuban Woman] (1996), written/transcribed by the Afro-Cuban historian Daisy Rubiera Castillo from her interviews with her mother María de los Reyes Castillo Bueno, “Reyita,” and a selection of poems from the contemporary Afro-Cuban poets Nancy Morejón and Georgina Herrera.

The study argues that the writers participate in black women’s self-inscription in the historical process by positioning themselves as subjects of their history and seizing discursive control of their (hi)stories. Although the texts form part of separate discourses, the book explores the commonalities of the rhetorical devices and narrative strategies employed by the authors as they disassemble racist and sexist stereotypes, (re)constructing black female subjectivity through an image of active resistance against oppression, one that authorizes unconventional definitions of womanhood and motherhood. The book shows that in the womens’ revisions of national history, their writings also demonstrate the pervasive role of racial and gender categories in the creation of a discourse of national identity, while promoting a historiography constructed within flexible borders that need to be negotiated constantly.

The study’s engagement in crosscultural exploration constitutes a step further in opening connections with a comparative literary study that is theoretically engaging, in order to include Afro-Cuban women writers and Afro-Caribbean scholars into scholarly discussions in which African American women have already managed to participate with a series of critical texts. The book explores connections between methods and perspectives derived from Western theories and from Caribbean and Black studies, while recognizing the black women authors studied as critics and scholars. In this sense, the book includes some of the writers’ own commentaries about their work, taken from interviews (many of them conducted by the author Paula Sanmartín herself), as well as critical essays and letters.

Black Women as Custodians of History adds a new dimension to the body of existing criticism by challenging the ways assumptions have shaped how literature is read by black women writers. Paula Sanmartín’s study is a vivid demonstration of the strengths of embarking on multidisciplinary study. This book will be useful to several disciplines and areas of study, such as African diaspora studies, African American studies, (Afro) Latin American and (Afro) Caribbean studies, women’s studies, genre studies, and slavery studies.

Translated: "Sanmartín’s critical vision [in her book Black Women as Custodians of History] shows black women as subjects that create their own history and as psychologically complex beings, by examining texts written by black women who present themselves in a way closer to reality and linked to everyday life. ... Black Women as Custodians of History includes chapters dedicated to works that have been written or re-edited since the 1980s. It was in this decade that a broad social and theoretical dialogue called "womanism" arose in the United States, as proposed by Alice Walker, and this dialogue strove to reflect on the simultaneity of oppressions that black women have suffered throughout history. In this context, it is fitting to analyze Sherley Ann Williams's novel Dessa Rose , published in 1986, and the autobiographical work of the slave Harriet Ann Jacobs, reissued and annotated in 1987 by Jean Fagan Yellin. The analysis of these two books helps us to understand the lives of slaves both in the United States and in Cuba, when there is a dearth of narrative texts written in Spanish about slavery from the Afro-feminine point of view. The comparative analysis not only helps to remediate this gap, but it also highlights the oppression suffered by Cuban female slaves in the historical discourse through the total elimination of their voices for centuries. —Afro-Hispanic Review

Paula Sanmartín is Professor of (Afro)Spanish American and (Afro)Caribbean literatures at California State University, Fresno. She holds a Licenciatura from Complutense University (Spain) and an MA and a PhD in comparative literature, specializing in African American and Afro–Latin American women’s writing, from the University of Texas at Austin. Dr. Sanmartín’s previous publications both in Spanish and English have appeared in journals such as MaComère and Revista Iberoamericana, and as part of a book on African American and Afro-Caribbean women’s literature. She is the coeditor of a forthcoming collection of essays on motherhood in Caribbean women’s and is a member of the editorial board of Cubanabooks, which publishes works by Cuban women authors.

Chapter 1. “We Could Have Told Them a Different Story”: Harriet Jacobs’s Alternative Narrative and the Revision of the White Transcript

Chapter 2. “They Mistook Me for Another Dessa”: Correcting the (Mis)Reading Techniques of the Master(’s) Narrative

Chapter 3. “In My Own Voice, In My Own Place”: The Continuous Revision of History in a Black Cuban Woman’s Testimonial Narrative

Conclusion. African American and Afro-Cuban Women Writers and the Dialogical Discourse of Contestation