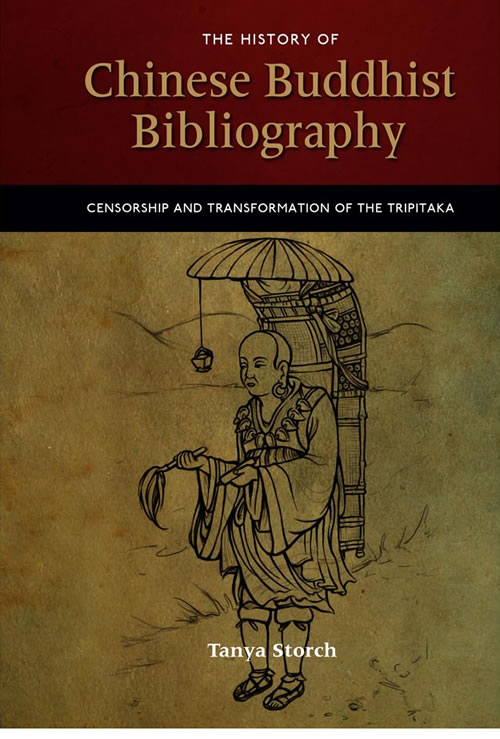 The History of Chinese Buddhist Bibliography: Censorship and Transformation of the Tripitaka by Tanya Storch

"As the first general study of Chinese Buddhist bibliography in English by an author who demonstrates a thorough command of the material, this book is the first place scholars should turn to for information about the structure and formation of the Chinese Buddhist canon. This book deserves a place on the bookshelf of every specialist in pre-modern Chinese, Korean, and Japanese Buddhism." – John Kieschnick, Stanford University

This study is a thorough examination of the entire historical scope of the Chinese Buddhist bibliography, including its historical foundations, textual classifications, criteria of authenticity, and collections made by individual catalogers. The need for such a study is urgent, for although references to and even in-depth studies of individual Buddhist catalogs and the data they contain have been written, there has not been until now an investigation into the entire historical scope of Buddhist bibliography in China. Understanding just what those who organized the canon over the centuries have left out, or preserved, is key to recovering a fuller appreciation for the development of Buddhism in East Asia in all its complexity. The study of individual bibliographers’ positions is equally crucial for the understanding of standards of authenticity and assignment of value to one group of scriptures over others. History of books, libraries, and learning in China would be incomplete without studying the history of Buddhist bibliography. Ultimately, it is necessary to study Buddhist bibliography because it represents the Tripitaka, the largest and most influential collection of sacred scriptures in the world, and because this collection needs to be incorporated into comparative discussions of Scripture and Canon in world history.

This is the first study that covers the entire historical scope of Buddhist bibliography in China in any European language, as well as the only study that provides detailed descriptions of all influential catalogs of the Buddhist canon written in the second through the end of the tenth centuries. It is the first attempt, in both European and Asian languages, to provide a comparative analysis between ideas, and these theological and historiographical principles used in creation of an authoritative canon by Christian and Buddhist scholars.

The History of Chinese Buddhist Bibliography: Censorship and Transformation of the Tripitaka is an important book for Asian studies, history of classifications, textual criticism, history of books, and history of libraries. This book would be appropriate for courses in Chinese Buddhism, Chinese history, and Chinese literature and civilizations. It will also be an excellent supplemental textbook for courses in comparative religious studies and comparative religious scripture.

"Storch offers a lucid and lively history of the development of scriptural catalogs from their murky origins in the third century up through the high Tang Dynasty (618-907) at the end of the eight century, a few centuries before print canons 'took on the [role of catalogs] in shaping the canon and defining its ideolofical and scriptural parameters' (xxiii). In attending to early catalogers' interest in producing catalogs, as well as noting formal innovations in the very structure of these catalogs with every successive iteration, Storch offers a comprehensive tour of medieval Chinese Buddhist catalog-thought, a discourse that had important effects not onl on Buddhist reading and other practices, but also on eventual reification and printing of East Asian Buddhist canons. ... Altogether the volume is a versatile guide to some of the earliest reference works in the Chinese Buddhist tradition. Additionally, dozens of tables outline each catalog's structure, rendering them comparable at a glance ...Storch's history provides a strong account for Chinese Buddhist catalogs' role in the evolution of that tradition's canon." — Review of Religion and Chinese Society

"This clearly organized, well-researched book on the medieval catalogs of Buddhist writings in China illuminates the shaky foundations of modern Buddhist research. Storch exposes how the Chinese Buddhist corpus was shaped—and even censored—by generations of catalogers, the guardians of the canon. At the same time, Storch probes the catalogs for what they reveal about standards of authenticity; the assignment of value to some scriptures over others; and the history of books, libraries, and learning in pre-modern China. Moreover, Storch argues convincingly that the history of Chinese Buddhist catalogs should be incorporated into comparative discussions of scripture and canon in world history. As the first general study of Chinese Buddhist bibliography in English by an author who demonstrates a thorough command of the material, this book is the first place scholars should turn to for information about the structure and formation of the Chinese Buddhist canon. This book deserves a place on the bookshelf of every specialist in pre-modern Chinese, Korean, and Japanese Buddhism." – John Kieschnick, Stanford University

“This volume brings forward the importance of the cataloging of the many versions of the Chinese Buddhist canon. Given that these compilations are the source for much of the written history of Buddhism in East Asia, they deserve the careful study that has been given to them by Tanya Storch in this book. Her research advances the understanding and provides much new data about this genre of literature and its impact on Chinese religion and culture.” – Lewis Lancaster, University of California, Berkeley

“Offers insight into wide-ranging issues of how religious ideas are transmitted between cultures. Although the focus here is on the ways in which Buddhism, in both oral and written forms, was assimilated into Chinese literary society, Storch’s comparative approach will also be of interest to scholars specializing in the comparative analysis of sacred scriptures.” – E. Ann Matter, University of Pennsylvania

"Cataloging is an essential step toward canon formation in East Asian Buddhism. However, current scholarship has not yet revealed the mysteries behind the collection of the enormous corpus of Buddhist texts, which is called the Buddhist canon, let alone the process of catalog making. Dr. Storch’s work is pioneering in this direction and touches the core of the rich textual tradition in East Asian Buddhism. In addition, her meaningful contribution will be of interest to researchers of a global history of scriptural catalogs because she brings in a comparative perspective to the subject matter and puts the Chinese Buddhist catalogs on a par with the Confucian textual tradition and Western cataloging practices. This book is highly recommended for scholars and students studying Buddhism, history of the Chinese book, and comparative religion." – Jiang Wu, University of Arizona

“This highly accessible book is not only helpful to the nonspecialists in Buddhism but also to Buddhist scholars who are interested in how and why differing versions of the Buddhist canon came into existence. Much Buddhist sectarianism stems from different assessments of what should be counted as a reliable Buddhist scripture. This account of the long and complex history of Chinese Buddhist ideas about what should be included in a catalogue of authentic Buddhist scriptures sheds much light on the process of canon formation in Buddhism. It also demonstrates that Chinese Buddhists played a leading role in dividing Buddhism into so-called ‘Hinayana’ and ‘Mahayana,’ which is at the root of much Buddhist sectarianism. – Rita M. Gross, University of Wisconsin–Eau Claire

Chapter 3: Chinese Ideas about the Authenticity of the Buddhist Canon

Chapter 4: The New Position of Buddhism in China

Chapter 5: The Golden Age of Chinese Buddhism and the Catalogs of the Tang Dynasty

Chapter 7: Notes on the Use of Book Catalogs in Religious And Secular Contexts

Appendix A: A Table of Chinese Buddhist Scriptural Catalogues