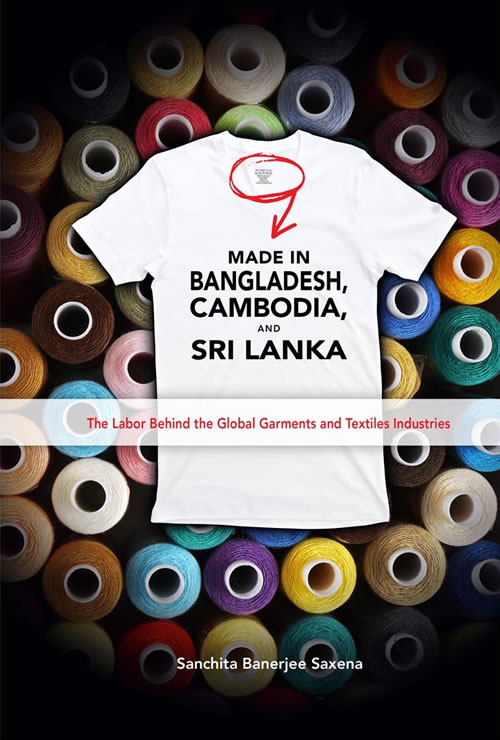 Made in Bangladesh, Cambodia, and Sri Lanka: The Labor Behind the Global Garments and Textiles Industries by Sanchita Banerjee Saxena

"Saxena's insightful and perceptive book explains how the garment industry in many Asian countries not only weathered the storm predicted when the Multi Fiber Arrangement was phased out, but in fact exploited the opening to become prominent garment exporters in the world. Her analytic explanation for this success, through the concept of domestic coalitions of the important stakeholders, is creative and persuasive." - William Milam, Senior Policy Scholar at the Woodrow Wilson Center and former U.S. Ambassador to Bangladesh

The garments and textiles sector is one of the oldest export industries and has often served as the “starter” industry for many countries, especially in Asia. To quell the fear of job losses to countries in the global South, northern countries established the Multi-Fiber Arrangement (MFA) in 1974. This arrangement restricted garment and textile imports to the United States, Canada, and the European Union (EU) by allocating quotas to countries throughout the developing world. The MFA, in place after more than thirty years, was finally phased out in 2005.

Most studies conducted prior to the 2005 quota phase out predicted that once the quotas were lifted, many of the “smaller” countries would drastically lose market share. The prime reason for this pessimism was the notion that the various stakeholders would never be able to work together to make the necessary changes needed for the sector. The subtext was that these groups would be too focused on their own interests and would not want to compromise their intimate relationship with powerful players in the industry. In contrast to the conventional wisdom of that time, many of the “unexpected” countries like Cambodia, Bangladesh, and Sri Lanka not only survived the end of the MFA, but they have made significant improvements which have allowed them to maintain their foothold in the international trading regime.

The general perception of the garment and textile industry in the global South is fueled only by images of dismal labor conditions and unsuitable factories, descriptions of labor clashes with police, and analyses of low wages and exploitative multinational corporations. This book presents an insightful perspective on the garment and textiles industries in Asia by highlighting that an industry fraught with competing concerns can, in fact, collaborate and work together when it is in the interest of both the state and interest groups to do so. This comparative study recognizes the role of both the state and interest groups in the policy making process and argues that they are interlinked and require one another for sustainable reforms.

Employing original, in-depth research in three different countries, the study skillfully delves down deep beyond the macro statistics and commonly held images to cast light on some of the significant policy and attitudinal shifts that have occurred in this industry. It demonstrates that even though the struggle continues, it is important to recognize the improvements thus far and to work towards positive change. This book also takes a much larger historical view of the sector, arguing that manipulation of the trading regime has created and continues to create both incentives and disincentives for the various stakeholders involved in this industry.

By analyzing the garment sector through the lens of domestic coalitions, Made in Bangladesh, Cambodia, and Sri Lanka: The Labor Behind the Global Garments and Textiles Industries presents new and innovative ways of conceptualizing the garment and textiles industries that include the possibility for change and resistance from a vantage point of cooperation among key groups, rather than only contention. The book utilizes the established policy networks framework, which has traditionally only been applied to the United States and European nations, but expertly adapts it to countries in the global South. Saxena’s domestic coalitions approach, which can be thought of as a precursor to a full policy network, differs from the policy network approach in crucial ways by highlighting the importance of other actors or facilitators in the network, recognizing that interactions among stakeholders are just as important as interactions between groups and the state, as well as the incentives associated with expanding the existing coalition.

Saxena has conducted more than a hundred interviews with key informants, several focus groups with eighty-five garment factory workers, as well as quantitative surveys of a hundred garment workers in Bangladesh, Cambodia, and Sri Lanka to establish several important insights about this early stage of domestic coalitions in these countries. First, the changing role of labor marked by its entrance into the coalition is itself significant in these countries where the network has been historically shut out to labor groups. Second, the study demonstrates that various types of channels and mechanisms, both institutionalized and non-institutionalized, are essential to ensure the representation of labor groups and their influence on policy change in the industry. Third, the book expertly delinks the concepts of “improved labor conditions” and “worker empowerment,” by arguing that one should not assume that better labor conditions automatically translate into an empowered workforce. Finally, Saxena comes to a critical conclusion that change and improvements stemming from top-down programs, though they may be initially effective in improving basic standards, do not help in furthering coalitions with labor groups and institutionalizing their role in policy making.

This study puts the entire sector into the larger context of international trade policy; effects of decades of import quotas set the context at the beginning of the book while current trade policies impacting the garment sector, are discussed at the end. Saxena convincingly argues that the sector and the incentives of those who depend on it cannot be understood without this larger context in which the sector has flourished and ultimately survived, and all of these elements combined are essential to understanding the complexities of the garment and textile industries.

Made in Bangladesh, Cambodia, and Sri Lanka is essential for students and researchers in policy studies, labor studies, South and Southeast Asian studies, international trade, and political science, as well as those engaged in program design and evaluation of projects focused on labor rights. This study is also critical for non-governmental organizations with a thematic focus on the garments and textiles industry, labor rights, human rights, and international trade policy, as well as for private sector organizations focused on improving labor conditions around the world.

“Sanchita Saxena's insightful and perceptive book explains how the garment industry in many Asian countries not only weathered the storm predicted when the Multi-Fiber Arrangement was phased out, but in fact exploited the opening to become prominent garment exporters in the world. Her analytic explanation for this success, through the concept of domestic coalitions of the important stakeholders, is creative and persuasive. And most exciting to me is the potential that domestic coalitions in industry might augment to full-fledged policy networks, perhaps to grow into the kind of inclusive political institutions that are the basis of modernization and real democracy.” – William Milam, Senior Policy Scholar at the Woodrow Wilson Center and former U.S. Ambassador to Bangladesh

"Sanchita Saxena has a keen mind and a big heart. Her book offers the best of both. It's a unique guide to the interaction of businesses, bureaucrats, activists, unions, and workers; the way their collisions make policy; and the nature of development. And it's a challenge, complete with lots of practical ideas, to all of us to do better." - Edward Gresser, Executive director of Progressive Economy and former Policy Advisor to the U.S. Trade Representative under the Clinton Administration

“This book is based on extensive field research across three Asian nations–-Bangladesh, Cambodia and Sri Lanka-–and presents a treasure trove of new industry level data on the garment exports industries and related sectors. It makes a compelling argument and presents both sides--the positive and negative--of the trends and developments. In fact, part of the value of this work is that it is a rebuttal of the existing scholarly (and popular) literature that focuses more on the hostilities in the industries, ignoring partnerships and coalition building. This book makes an important contribution to the literature.” – Munir Quddus, Dean College of Business, Prairie View A&M University

"Sanchita Saxena is to be commended on a work which contextualizes the emerging tensions within a highly competitive global economy, particularly as they pertain to the workers within the garments industries of three important exporters, Bangladesh, Cambodia and Sri Lanka. Her work, drawing on some valuable primary research, should be of much value to not just researchers and policymakers but also to the workers of these industries." - Rehman Sobhan, Economist and Chairman, Centre for Policy Dialogue, Bangladesh

Sanchita Banerjee Saxena is the executive director of the Institute for South Asia Studies (ISAS) at the University of California at Berkeley and the director of the Chowdhury Center for Bangladesh Studies under the ISAS. Prior to joining ISAS, she was the assistant director of Economic Programs at the Asia Foundation, where she coauthored The Phase-Out of the Multi-Fiber Arrangement: Policy Options and Opportunities for Asia. She has also served as a consultant to the Asia Foundation on various economic projects and was a Public Policy Fellow at the Woodrow Wilson International Center for Scholars in Washington D.C. in 2010 and 2014. Dr. Saxena holds a PhD in political science from UCLA. She has given invited lectures at several universities and institutions, including Georgetown University, Johns Hopkins University, UC Berkeley, the United States International Trade Commission, the Center for Global Development, and the U.S. Bangladesh Advisory Council. Her commentaries have been featured in the New York Times, Economic and Political Weekly, Thompson Reuters, The Daily Star and aired on LinkTV, KQED World, and KPFA.

Chapter 2. A Theory of Domestic Coalitions in the Garment Industries

Chapter 3. The MFA and Access to Global Markets: Experiences Throughout Asia

Chapter 5. Communication in the Domestic Coalition