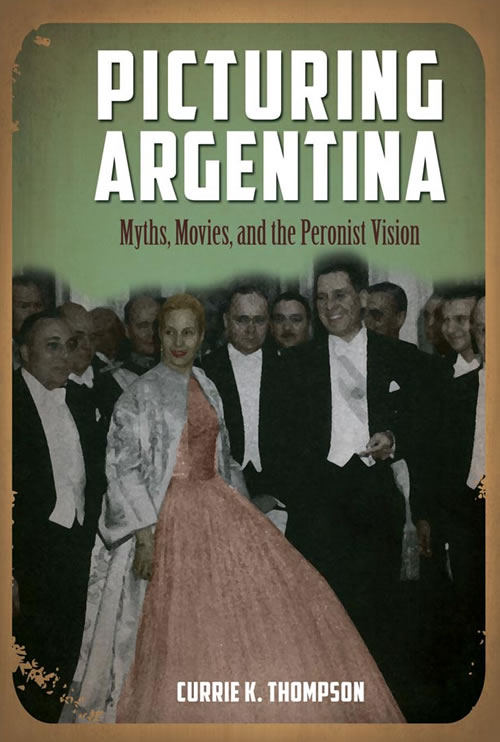 “Picturing Argentina is a much-needed and carefully researched history of film production and social and cultural influences on Argentine cinema from the thirties to the sixties. ... This study will be beneficial to anyone interested in Latin American cinema while providing essential background for understanding one of the world's major film traditions.” – Gerald Duchovnay, general editor, Post Script: Essays in Film and the Humanities

No individual has had greater impact on Argentine history than Juan Domingo Perón. The years 1943–1945, when he was an influential member in his nation’s governing junta, and 1946–1955, when he was its president, were tumultuous ones that transformed Argentina. Perón was a highly controversial figure, and his memory continues to provoke intense and often acrimonious debate. Moreover, the nature of his legacy resists neat classification. Many of his achievements were positive. He oversaw the passage of progressive social legislation, including women’s suffrage and prison reform, and he implemented programs that aided the nation’s poor and working classes. On the other hand, he tolerated no opposition and, as president, incarcerated even former supporters who questioned his actions, and he ordered the closure of newspapers that he judged inappropriately critical.

His regime’s impact on the nation’s cinema is similarly difficult to classify. When Perón came to prominence, Argentina had developed one of the two major film industries in Latin America. His government intervened in this sphere to an unprecedented degree and in contradictory ways. It encouraged production by providing financial credits for filmmakers, and in 1948 Perón and his wife, Evita, a former actress, presided over the inauguration of the nation’s international film festival in Mar del Plata. Conversely, his administration blacklisted a remarkable number of directors and performers, censored and prohibited movies, and required all films made in Argentina to portray his regime’s accomplishments in a favorable manner.

Although Perón’s central role in Argentine history and the need for an unbiased assessment of his impact on his nation’s cinema are beyond dispute, the existing scholarship on the subject is limited. In recent decades Argentina has witnessed a revival of serious film study, some of which has focused on the nation’s classical movies and, in one case, on Peronism. None of this work has been translated into English, however. The only recent book in English to study this topic divides its attention between Argentine cinema and radio and dedicates only one chapter to film during the Perón years. Picturing Argentina: Myths, Movies, and the Peronist Vision is the first English-language book that offers an extensive assessment of Argentine cinema during first Peronism. It is also the first study in any language that concentrates systematically on the evolution of social attitudes reflected in Argentine movies throughout those years and that assesses the period’s impact on subsequent filmmaking activity.

By analyzing popular Argentine movies from this time through the prism of myth—second-order communication systems that present historically developed customs and attitudes as natural—the book traces the filmic construction of gender, criminality, race, the family, sports, and the military. It identifies in movies the development and evolution of mindsets and attitudes that may be construed as “Peronist.” By framing its consideration of films from the Perón years in the context of earlier and later ones, it demonstrates that this period accelerates—and sometimes registers backward-looking responses to—earlier progressive mythic shifts, and it traces the development in the 1950s of a critical mindset that comes to fruition in the “new cinema” of the 1960s.

“Picturing Argentina is an easy-to-read, extremely informative analysis of Argentine cinema in the 1933–1955 period. Despite the fact that Argentina was a major producer of film in this period, the existing scholarship on the subject is not extensive. There is nothing in print that is comparable to this work. The author has viewed some 509 movies, a number that must be very close to the total number of available films from the period, and he discusses most of them. As a result, this book has an encyclopedic quality. The book’s thoroughness–both in terms of the films it considers and the bibliography with which it engages–as well as the clarity of its prose is impressive. It will be an invaluable resource for film scholars and cultural historians.” – Matthew B. Karush, George Mason University, and author of Culture of Class: Radio and Cinema in the Making of a Divided Argentina, 1920–1946

“Elegantly written and argued, Thompson’s Picturing Argentina offers the reader a lively mosaic of the ‘clashing and intersecting’ ideological practices and myths offered by Argentine cinema during the first Peronist government, 1943-1955. Deploying his encyclopedic knowledge of Argentina cinema and culture, Thompson traces the complex ways that the cinema reflected, refracted, and even countered the social and political common sense of the period. At once social history and film analysis, this will be a most welcomed addition to the Latin American film studies book shelf.” – Ana López, Tulane University

“This well-researched study offers a fresh and much needed angle on gender representations in Argentine film during Peronism. Thompson excels at analyzing numerous films that have not received much attention. This compelling monograph opens new paths for the analysis of Argentine film production and is essential for Latin Americanists.” – Carolina Rocha, author of Masculinities in Contemporary Argentine Popular Cinema

“Picturing Argentina is a much-needed and carefully researched history of film production and social and cultural influences on Argentine cinema from the thirties to the sixties. For those who know Argentinian cinema primarily from the 1980s and thereafter, Thompson's erudition opens new ways in to important areas of investigation. This study will be beneficial to anyone interested in Latin American cinema while providing essential background for understanding one of the world's major film traditions.” – Gerald Duchovnay, general editor, Post Script: Essays in Film and the Humanities

Chapter 4: Motherhood and the Maternal Melodrama