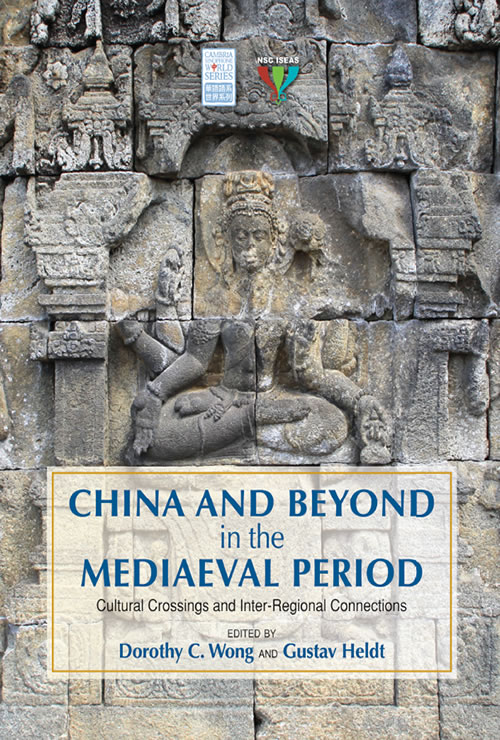 China and Beyond in the Mediaeval Period: Cultural Crossings and Inter-Regional Connections by Dorothy C. Wong and Gustav Heldt

"Highly recommended to every student who wants to study medieval China not as an insular exception, but as an active part of world history." —Journal of World History

*Oversized and includes 157 images, many of which are in color.

This volume examines China’s contacts with neighboring cultures in Central, South, Southeast, and Northeast Asia, as well as contacts among those cultures from the beginning of the Common Era to the tenth century and beyond. During this period, transregional and crosscultural exchanges were fostered by both peaceful and aggressive activities and movements of peoples across Eurasia along land and maritime routes. Such movements played an important role in world history in the medieval period, and yet many aspects of cultural exchanges across Eurasia remain understudied. The lack of knowledge is particularly evident in treatments of Chinese history between the Han and Tang empires. Examining relations with neighboring cultures during this period calls into question notions of China as a monolithic cultural entity.

During the period covered in this volume, cultural contacts and exchanges were fostered by both peaceful and aggressive activities and movements of peoples along land and maritime routes of the so-called Silk Road. From the earliest recorded times, the Silk Road was a channel for the transmission of ideas, technologies, and artistic forms and styles across Eurasia, with far-reaching impact from the Pacific to the Atlantic.

Despite the centrality of exchange and hybridization to the history of medieval East Asia, many aspects of its connections beyond China cultures and history remain understudied. Similar, there is a lack of comprehensive knowledge of the period between the Han and Tang empires in Chinese history. In examining China’s relations with neighboring cultures during this period in particular, this book does not begin with the usual monolithic and stereotypical notion of China being an enduring and coherent cultural entity. Rather, through the close analysis presented in each chapter, this study expands the scope of inquiry to examine the mechanisms and contents of cultural exchanges, and the fertile byproducts of these exchanges.

Perhaps one of the most notable mediaeval phenomena that created shared cultural spheres across linguistic and political boundaries was the transmission of such religious faiths as Buddhism, Christianity, Islam, Zoroastrianism, Manichaenism and Nestorianism. Buddhism’s spread eastward from India to finally become a religion adopted in all of Asia had an especially significant impact on many countries. In this sense, the Eurasian interactions can be considered common to a medieval world interwoven by religion.

The twenty-one chapters reveal transmissions, transgressions, syntheses, accommodations, and transformations that occurred when peoples and cultures came into contact with one another. They explore the motivations for the movements of peoples and goods—trade, war, diplomacy, acquisition of culture and knowledge (and sometimes of talent), and evangelical Buddhism. They also analyze the impacts of these exchanges through study of the artefacts, concepts, technologies, and practices associated with these interactions from a multidisciplinary perspective.

The focused study of the individual authors, each from her or his disciplinary training (art history, cultural studies, history, literary studies, religious studies, history of science, etc.), sheds light on the crossing of boundaries of geographic, cultural, linguistic, and sometimes temporal distance. Whether it is Tang China, Yamato Japan, Viking Sweden, or Zoroastrian Central Asia, however, each chapter highlights the prominent place of cultural crossings as both inter-regional movements and the fertile products they produced.

Given that the expertise from a breadth of disciplines, this unique interdisciplinary book will enjoy an equally broad readership of students, teachers, and researchers engaged in comparative approaches to the history and culture of Medieaval Eurasia at large.

"Highly recommended to every student who wants to study medieval China not as an insular exception, but as an active part of world history." —Journal of World History

"Highly recommended to those seeking new research on the transmission of Mahayana Buddhism across Asia, and Chinese textual and religious culture to Japan." —Bulletin of the School of Oriental and African Studies

"Every criterion of a successful edited volume, and in addition a book with new information on a heavily researched subject, is met in this book, and more are accomplished. China and Beyond in the Mediaeval Period is an excellent collection of twenty-one chapters that offers twenty-one fresh ideas; many of them are important ... Editors, authors, and others involved in this book are to be commended." —Journal of the Royal Asiatic Society

"This is a splendid book on cultural interactions across Eurasia, which crosses many boundaries--disciplinary, national, and conceptual--to provide us with an awe-inspiring picture ... The important insights provided by this book, which illuminate a whole range of issues, stand on a solid bedrock of scholarship. ... Specialists in the various disciplines covered in this volume will find much that is new and rewarding, while the general reader can also benefit from the many thought-provoking ideas and insights it has to offer." —The Book Review

“Wong’s and Heldt’s edited anthology represents the future of Asian Studies. A thoroughly transcultural perspective that characterizes the volume sheds new lights on issues that have been studied only within the framework of East Asian modern nation states. At the same time, it demonstrates how immediately relevant the same issues are to the studies of other areas of Asia and beyond. This anthology is a must for anyone who aims at introducing innovations into area studies across diverse academic disciplines.” — Ryuichi Abe, Reischauer Institute Professor of Japanese Religions, Harvard University

“If any readers are still tempted to believe that Chinese civilization was in past centuries immured in introspective isolation, this is the book that should swiftly set them right. Contributors, editors and publishers have all done brilliantly to recreate a long gone wider world, full of colour and movement,within which China was—however important, but one element in a much larger whole. No history lesson today could be more important than this.” — T. H. Barrett, Research Professor of East Asian History, SOAS, University of London

“As this international and interdisciplinary group of scholars shows so well, ideas, people, and things were in motion across Eurasia all during the first millennium CE. The material culture of Buddhism is at the heart of a third of the twenty-one chapters, but less expected topics appear as well, from the use of Chinese poetry at the Nara court to reaction against foreign dress in Tang China and the Zoroastrian imagery in Sogdian tombs. The chapters on Chinese-Japanese interactions are especially welcome, as this side of Eurasian cultural interchange is rarely treated in the same volume as China-Central Asia ones. The rich bibliographies should inspire students and scholars to venture further into the many sides of cultural interaction.” — Patricia B. Ebrey, Professor of History, University of Washington

Dorothy C. Wong is Associate Professor of East Asian Art at the University of Virginia.

Gustav Heldt is Associate Professor of Japanese at the University of Virginia.

Wendi L. Adamek is the Numata Chair in Buddhism in the Department of Religious Studies at the University of Calgary.

Suzanne Cahill is adjunct professor of Religious Studies at the University of California at San Diego.

Sherry Fowler is Associate Professor of Art History at the University of Kansas.

Kam-Wing Fung is Associate Professor of Chinese at the University of Hong Kong.

Mack Horton is Professor of East Asian Languages and Cultures at the University of California at Berkeley.

Anne Behnke Kinney is Professor of Chinese and Chair of the Department of East Asian Languages, Literatures and Cultures at the University of Virginia.

Keith N. Knapp is Professor of Chinese History at The Citadel, The Military College of South Carolina.

Lewis Lancaster is Emeritus Professor of East Asian Languages and Cultures at the University of California at Berkeley.

Denise Patry Leidy is Curator of Chinese Sculpture and Decorative Arts in the Department of Asian Art at The Metropolitan Museum of Art, New York.

Eric Ramírez-Weaver is Assistant Professor of Art History at the University of Virginia.

John M. Rosenfield (1924–2013) was the Emeritus Abby Aldrich Rockefeller Professor of East Asian Art at Harvard University, where he also served as Curator of Asian Art.

Norman Harry Rothschild is Associate Professor of Chinese History at the University of North Florida.

Tansen Sen is Associate Professor of Asian History and Religions at Baruch College.

Henrik H. Sorensen is an independent scholar who has formerly taught at the University of Copenhagen and been a senior researcher at the National Museum in Denmark.

David Summers is the William R. Kenan, Jr., Professor of the History of Art at the University of Virginia.

Yuanlin Zhang is Research Fellow and Department Head of the Information Center of the Dunhuang Academy, China.

Part I. Networks of Exchange

Chapter 1: Crossing a Boundary: Where, When, How (Lewis Lancaster)

Chapter 7: Images of Sun and Moon Gods in Dunhuang Murals between the Sixth and Tenth Centuries (Yuanlin Zhang)

Chapter 8: Islamic Silver for Carolingian Reforms and the Buddha-Image of Helgo: Rethinking Carolingian Connections with the East, 790–820 (Eric Ramírez-Weaver)

Part III. Textual Centres and Peripheries in China and Beyond

Chapter 12: The Mother of Laozi and the Female Emperor Wu Zhao: From One Grand Dowager to Another (Norman Harry Rothschild)

Chapter 14: Literary Diplomacy in Early Nara: Prince Nagaya and the Verses for Envoys from Silla in Kaifuso (H. Mack Horton)

Chapter 15: Abe no Nakamaro at the End of the Silk Road (Gustav Heldt)

Chapter 18: Saved by the Bell: The Six Kannon and Bonsho (Sherry Fowler)