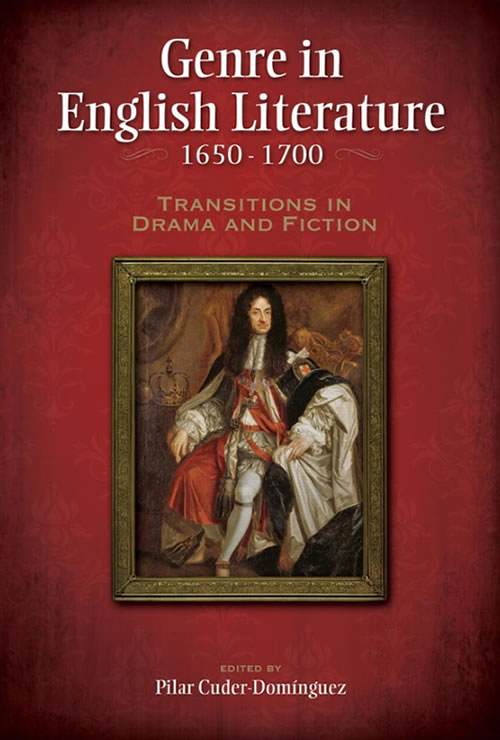 Genre in English Literature, 1650–1700: Transitions in Drama and Fiction by Pilar Cuder-Domínguez

This book opens the field of English literature further through the framing of new questions or revising of old ones, as well as to beginning a dialogue, yet again, as to the meanings of these literary works and also to their circulation from their inception up to the present time. In addition, the rare attention given to works by women makes this all the more an important book for collections in English literature of the period.

This book examines the theories and practices of narrative and drama in England between 1650 and 1700, a period that, in bridging the Renaissance and the Enlightenment, has been comparatively neglected, and on which, at the time of writing, there is a dearth of new approaches.

Critical consensus over these two genres has failed to account for its main features and evolution throughout the period in at least two ways. First, most approaches omit the manifold contradictions between the practice and the theory of a genre. Writers were generally aware of working within a tradition of representation which they nevertheless often challenged, even while the theory was being drafted (e.g., by John Dryden). The ideal and the real were in unacknowledged conflict.

Second, critical readings of these late Stuart texts have fitted them proactively into a neat evolutionary pattern that reached eighteenth-century genres without detours or disjunctions, or else they have oversimplified the wealth of generic conventions deployed in the period, so that to the present-day reader, for instance, Restoration drama consists only of either city comedies or Dryden’s tragedies. A cursory survey of the critical history of seventeenth-century drama and fiction confirms these views.

Although the 1970s and 1980s brought about a crop of interesting reassessments of the field, fiction continues to be seen as a genre that emerged in the eighteenth century. Most critics still treat earlier manifestations as marginal or as prenovelistic experiments; and in most instances it is even possible to discern a sexist bias to justify this treatment, as these works were written by women, unlike much of the canonical fiction of the eighteenth century. A revision of the critical foundations hitherto held and a re-evaluation of the works of fiction written in the seventeenth century is therefore in order.

This study adopts, as a basic and essential methodological tenet, the need to decenter the analysis of Restoration fiction and drama from the traditional canon, too limited and conservative and featuring works that are not always suitable as paradigmatic instances of the literary production of the period. These studies have thus been based on a larger than usual--if not on a full--corpus of works produced within the period, and have sought to ascertain the role played in the development of each of the genres under consideration by works, topics, or even by authors hitherto somewhat outside mainstream literary criticism.

This opens the field of English literature further through the framing of new questions or revising of old ones, as well as to beginning a dialogue, yet again, as to the meanings of these literary works and also to their circulation from their inception up to the present time. In addition, the rare attention given to works by women makes this all the more an important book for collections in English literature of the period.

Pilar Cuder-Domínguez is is Professor of English at the University of Huelva (Spain), where she teaches English Literature and Women's Studies. She is the author of Margaret Atwood: A Beginner’s Guide; Stuart Women Playwrights, 1613–1713; and Transnational Poetics: Asian Canadian Women’s Fiction of the 1990s, as well as the editor or coeditor of six collections of essays (La mujer del texto al contexto, 1996; Exilios femeninos, 2000; Sederi XI, 2002; Espacios de Género, 2005; The Female Wits, 2006; and New Perspectives on the Black Atlantic, 2012). She has been a visiting scholar at different universities worldwide, including McGill, Dalhousie, Northwestern, Toronto, and Cambridge.

Jorge Figueroa Dorrego teaches English literature at the University of Vigo (Spain). He has written on Aphra Behn’s narrative (Santiago de Compostela, 1998), an introduction to Behn’s life and works (1999), and a monograph on the prose fiction of seventeenth-century women writers (Tecendo tramas, fiando ficcións, 2002). He has coedited A Source Book of Literary and Philosophical Writings on Humour and Laughter (2009) and several collections of essays, such as Estudios sobre humor literario (2001), Re-shaping the Genres: Restoration Women Writers (2003), and Revisiting and Reinterpreting Aphra Behn (2003). He is also the author of several papers on seventeenth-century writers such as Wroth, Weamys, Cavendish, Behn, Arrowsmith, Oldys, and Ariadne.

Paula de Pando is a member of the research group The Restoration Comedy Project at the University of Seville (Spain), from which she holds her PhD. She has coedited Thomas Durfey’s The Marriage-Hater Matched (2014) and has participated in the compilation of data for Restoration Comedy: A Catalogue, 1660–1670 published by Teneo Press. She has published on Jacobean and Restoration drama in journals such as English Studies and Women’s Writing. She teaches English for Academic Purposes at the University of Surrey.

Juan A. Prieto-Pablos is Professor in English at the Department of English literature, University of Seville. He is a member of the Restoration Comedy Project and has coedited Thomas Shadwell's The Virtuoso (1997) and Epsom Wells (2000), Joseph Arrowsmith's The Reformation (2003), and the anonymous comedy The Woman Turned Bully (2007), and is one of the contributors to Restoration Comedy: A Catalogue, 1660–1670 (2014). He has published articles on Renaissance and Restoration drama in The SEDERI Yearbook, Atlantis, Studies in English Literature, Theatre Notebook, and RECTR.

Sonia Villegas-López teaches English Literature at the University of Huelva. Her areas of research include gender studies and seventeenth-century women’s fiction. She has published essays (Re-shaping the Genres, 2003; The Female Wits, 2006) and articles (SEDERI Yearbook 1998, 2002, 2003, 2004), and presented papers in national and international conferences on Aphra Behn, Catharine Trotter, Mary Pix, and Mary Davys, among other authors. She is a member of the Spanish and Portuguese Society for English Renaissance Studies.

Rafael Vélez teaches English literature and drama at the University of Cádiz. His research interest focuses on Early Modern musico-dramatic genres and performances, poetry and gender studies. He has published on these topics in the SEDERI Yearbook and BELLS, Journal of Medical Humanities, as well as in collections such as Re-Shaping the Genres, 2003; The Female Wits, 2006; The Construction of the Other in Early Modern Britain, 2013). He also participates in The Restoration Comedy Project and contributed to Restoration Comedy: A Catalogue, 1660–1670 (2014).

Chapter 1. Spatial Practices in the Works of Margaret Cavendish: Pushing the Boundaries of Gender and Genre

Chapter 5. 'Look to thy self, and Guard thy Character’: She-tragedy and the Conflicts of Female Visibility

Chapter 6. Geographies of Interiority: Exile in Women’s Epistolary Fiction of the Restoration