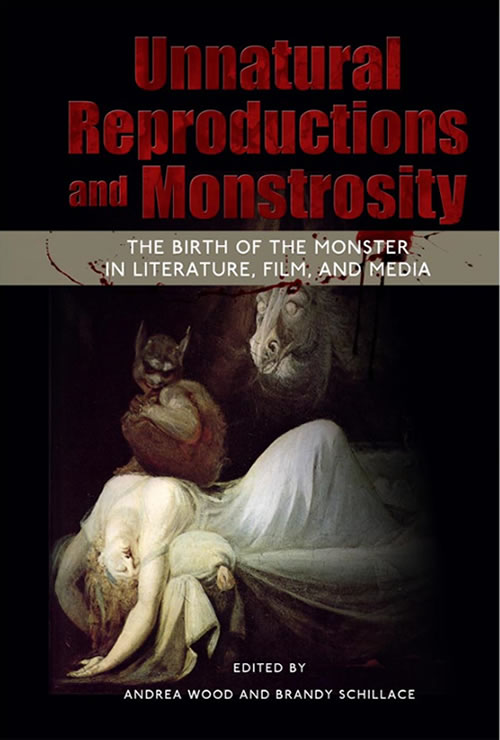 Unnatural Reproductions and Monstrosity: The Birth of the Monster in Literature, Film, and Media by Andrea Wood and Brandy Schillace

"Offers rare interrogations on how monstrosity must be considered in relationship to gender, procreations, and relationships ... well-written, scholarly, and edgy ... a well-focused edition [that] offers innovative topics and new concepts on how monsters haunt and attract us, frightening and stimulating our imaginations, if not also making us rethink what it means to be human." —Rocky Mountain Review

Monsters continue to fascinate—as well as to plague and haunt imaginations. The psychic landscape is peopled with them; the social fabric is woven of them. This persistent, paradoxical repulsion and fascination with monsters and the monstrous begins, however, with causation. With the “birth” of each new monster comes a particular anxiety about its ability to self-replicate, generally through perceived “unnatural” means. The cultural imaginary remains obsessed with the origins and genesis of monsters. From whence do monsters come? How are they created—and more importantly—what is their reproductive potential?

Ironically, the very cultural and unconscious fears and anxieties about “unnatural” reproduction and monstrous progeny give birth to texts that perpetuate the creation and replication of monsters. The link between the monstrous and fears of reproduction are present from early modern narratives through nineteenth-century fears of degeneration, and into contemporary fascination with apocalyptic zombie films and science fiction narratives about genetic engineering, viral pandemics, and trans-species generation. While the incarnation of the monster manifests through different vehicles across these periods and texts, it is clear that, regardless of its form, anxiety is rooted in concerns over its fecundity—its ability to infect, to absorb, to replicate.

Much has been written about gender and the monstrous, but sustained engagement with textual manifestations of cultural and unconscious fears and anxieties about “unnatural” reproduction has been limited. This book expands the current discourse on the monstrous reproductive potential of bodies—as well as minds—from a more interdisciplinary and transhistorical framework. While scholarly interest in monsters and the monstrous is certainly not new, studies on monstrous reproduction and birth have tended to be either discipline or period specific, and many are now dated. Drawing from diverse interdisciplinary perspectives in film and media studies, literary studies, history, medicine and women’s and gender studies, Unnatural Reproductions and Monstrosity builds upon pre-existing work while engaging more directly with monstrous progeny, as well as with unnatural reproduction(s), which threaten to eclipse the future, cast uncertainty on the present, and reimagine the past.

Ultimately, then, the primary contribution of this book lies not only with its extensive treatment of reproductive monstrosity and unnatural parturition, but with the breadth and intriguing continuity that only a wide lens can provide. This book does not attempt to provide a complete historical assessment or catalog of the enduring cultural fascination with the reproductive origins and potential of monsters. Rather, it provides diverse interdisciplinary and transhistorical perspectives with single unifying theme of unnatural reproduction(s), which is unique to the collection, remaining central to the concept of monstrosity and its evolving narrative incarnations.

This interdisciplinary collection spanning the areas of history, literature, medical humanities, and film and media studies explores the transhistorical textual fascination with reproductive monstrosity and unnatural parturition. The collection’s four sections provide perspective on hyperbolic and monstrous representations of reproduction and birth that speak to anxieties and fears about gender and sexuality, codified through “unnatural” manifestations and their progeny. By focusing not only on the effect of the monstrous, but also on its reproduction in a variety of genres and modes from science to cinema, the essays in this collection offer critical insight into enduring questions about the genesis of monsters and their reproductive potential that have long haunted the world and continue to shape many fears about the future. This book analyzes how fears about unnatural reproduction and monstrous offspring—and their frequent connections to the feminine—have proliferated and propagated across the very texts which are repetitively created and consumed.

Unnatural Reproductions and Monstrosity is an important interdisciplinary book for university library collections and scholars working in women’s and gender studies, film and media studies, history, literature, and medical humanities.

"Presents a new path of scholarship ... offers rare interrogations on how monstrosity must be considered in relationship to gender, procreations, and relationships [with] 14 well-written essays ... Essentially, Unnatural Reproductions and Monstrosity offers a more thorough treatment and ethical query of reproductive monstrosity and unnatural parturition. In this regard, how women, maternity, and motherhood are treated in literature, film, and media are especially scrutinized and evaluated ... well-written, scholarly, and edgy ... a well-focused edition [that] offers innovative topics and new concepts on how monsters haunt and attract us, frightening and stimulating our imaginations, if not also making us rethink what it means to be human." —Rocky Mountain Review

Andrea Wood is an Assistant Professor of Media Studies in the English Department at Winona State University. She holds a PhD from the University of Florida, a Master’s from the University of Edinburgh, and a BA from McGill University. Dr. Wood has published articles in Women’s Studies Quarterly, Journal of Graphic Novels and Comics, and Culture, Medicine and Psychiatry. She has also published her work in the edited collections Over the Rainbow: Queer Children’s Literature and Global Visual Cultures: An Anthology. Dr. Wood is coediting a special issue of Journal of Popular Romance Studies on “Queering Romance,” which will be released in 2015.

A medical-humanities and history scholar, Brandy Schillace (PhD) is research associate, guest curator, and public engagement contact at the Dittrick Museum of Medical History and managing editor of Culture, Medicine and Psychiatry (an international journal of cross-cultural health research). She helps develop medical humanities curriculum for the Cleveland Clinic Lerner College and teaches for Case Western Reserve University’s SAGES program. Dr. Schillace’s book Death’s Summer Coat: What the History of Death and Dying can Tell us about Life and Living will be released in 2015 with Elliott and Thompson. She has published in a variety of journals, including Eighteenth-Century Studies and Feminist Formations, and writes for Huffington Post, H-net, and the Centre for Medical Humanities Blog. Dr. Schillace was an invited lecturer in 2010 at the Centre for the History of Science, Technology and Medicine, University of Manchester, UK, and keynote speaker for the 2013 Association for Librarians in the History of Health Sciences.

I. Theorizing Monstrous Genesis: Past, Present, and Future

Chapter 2. The Devil Made Me Do It: Sin, (Inner) Demons, and Monstrous Reproduction in Milton’s Paradise Lost (Joanna Shearer)

Chapter 4. Monsters that Matter: The Monstrous Birth and Other Things that Rise in the Contemporary Zombie Film (Jesse Stommel)

Chapter 6. Death, Disease and Discontent: The Monstrous Reign of the Super-virus (Emilie Taylor-Brown)