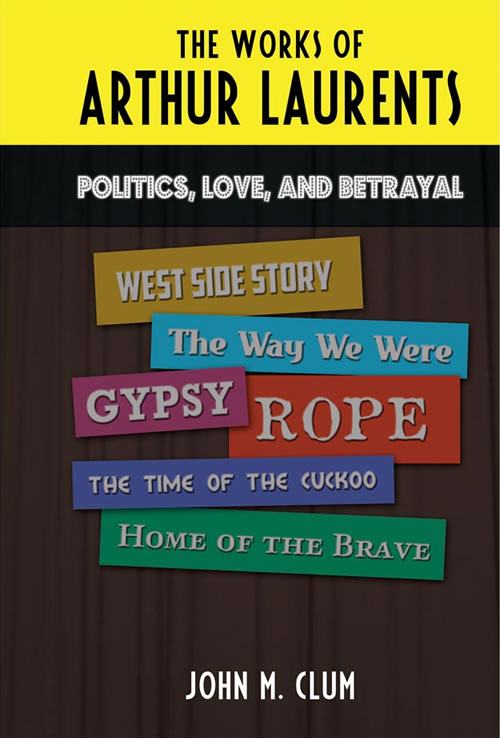 The Works of Arthur Laurents: Politics, Love, and Betrayal by John M. Clum

"This is the first substantial study of the work of Arthur Laurents, and it was worth waiting for. In this authoritative and engaging book, John Clum draws on an unparalleled fund of knowledge about the musical theatre and the history of LGBT theatre in America to chronicle Laurents's importance as a gay playwright writing about gay issues during the 20th century." - Brenda Murphy, University of Connecticut

Arthur Laurents’s career as a playwright, screenwriter, book writer for musicals and director spanned over half a century. His first Broadway play, Home of the Brave, was produced in 1945; his last play, Come Back, Come Back, Wherever You Are, was produced in 2009 when he was ninety-one. Although he is best known for his work on the classic musicals Gypsy and West Side Story and for his screenplays for Rope, The Way We Were, and The Turning Point, Laurents is the author of seventeen full-length plays, numerous screenplays and three volumes of memoirs.

Laurents’s work reflects his political and social views and can be seen as a history of the changing roles of women, Jews, and gay men in American society since the end of World War II. His plays and screenplays also present a chronicle of the political left during the second half of the twentieth century. There is often an autobiographical dimension to Laurents’s work. The experiences of the central characters in Laurents’s screenplay for The Way We Were and his play Jolson Sings Again are based on some of Laurents’s own experiences during the Red Scare and blacklist in Hollywood. His plays The Enclave and Two Lives reflect his own experiences as a gay man in a long-term loving relationship. Home of the Brave and My Good Name explore Laurents’s own responses to his Judaism and American anti-Semitism.

Arthur Laurents is best remembered for his collaborations with Leonard Bernstein, Stephen Sondheim, and Jerome Robbins on the groundbreaking musical, West Side Story, and with Sondheim, Robbins and Jule Styne on Gypsy, one of the most celebrated and most often revived works of musical theatre.

Though Laurents on occasion broke with the conventions of dramatic realism, most notably in his play, A Clearing in the Woods and the musical Anyone Can Whistle, his best plays are well-crafted examples of American domestic realism. His characters are usually urban, affluent, highly educated and articulate and argumentative.

Despite the length and distinction of Laurents’s career, until now no one has written a full-length critical study of his work. Laurentss’ name was associated with a few hit musicals and films, but his best work, the plays he wrote since 1975, are not as well known. One reason is that the economics of the American theatre have changed during the writer’s lifetime and Laurents’s serious plays were performed Off-Broadway or at regional theatres. Few were published, except in acting editions, until a volume of Selected Plays was assembled in 2005. Moreover, Laurents’s highly controversial volumes of memoirs, filled with attacks on people who he felt betrayed him over the years, overshadowed his later work. Ignoring most his own plays in the memoirs did not help to maintain his reputation as a serious playwright This book rectifies the absence of a serious examination of all of Laurents’s major work.

This first comprehensive study of Laurents’s work focuses on the subjects and themes that recur in his work, particularly the interrelated topics of gender politics, homosexuality and the dynamics of marriage. The position of women and gay men changed greatly over the sixty-plus years of Laurents’s career and we see those changes reflected in his work, particularly in the shifting power dynamics within a marriage. Laurents was fascinated by the dynamics of marriage. In his plays there is always a tension between love and the difficulty, if not impossibility, of monogamy. In works like The Enclave, we also see a variety of ways in which gay men try to live proud lives in a heteronormative society. In that play and in Two Lives, Laurents examines how gay men negotiate something like a marriage before gay marriages were legally sanctioned. The book also covers the ways in which Laurents’s plays reflect his interest in leftist politics from the 1940s through the various liberations of the late 1960s and 1970s. Above all, the study argues that if there is any common theme running through the plays, films and memoirs, it is betrayal—betrayal of marriage partner, friend, artistic collaborator and, most important, betrayal of one’s own ideals.

“This is the first substantial study of the work of Arthur Laurents, and it was worth waiting for. In this authoritative and engaging book, John Clum draws on an unparalleled fund of knowledge about the musical theatre and the history of LGBT theatre in America to chronicle Laurents’s importance as a gay playwright writing about gay issues during the twentieth century. He elegantly demonstrates the ways in which Laurents’s writings parallel the momentous changes in the social, cultural, and political status of LGBT people during the period of his long life, from 1917 to 2011. An important subtext is Laurents’s living out his belief that the personal is political in his life and work. Clum shows this vividly in Laurents’s enduring interest in particular political issues such as McCarthyism, its attendant blacklisting and informing, and the issues surrounding gay rights as they inform his writing about the interconnections between politics and human relationships and actions. This book is bound to stimulate a new awareness of the significance of Laurents’s work for the study of twentieth-century American culture.” — Brenda Murphy, Distinguished Professor Emeritus, University of Connecticut

“This much-needed study of the life and career of playwright-librettist-director Arthur Laurents examines not only his achievements in musicals, including such beloved classics as Gypsy and La Cage aux Folles, but also in his lesser-known but impressively diverse dramatic works. One of the last ‘hyphenates’ of the American theatre, Laurents engendered the admiration of the leading theatrical lights of the second half of the twentieth century. This well-researched book reveals Laurents and will fascinate those for whom Broadway musicals and dramas reached a peak when Laurents was at work.” — James Fisher, Professor of Theatre, University of North Carolina at Greensboro

John Clum is Professor Emeritus of Theater Studies and English at Duke University where he taught for over forty years. He founded the Duke University Drama Program, which has become the Department of Theater Studies. He was the Director of the Duke in London Drama Program and also ran London theater programs for the Graduate Program in Liberal Studies and the Alumni Association. Professor Clum won Duke’s Outstanding Professor Award twice.

Professor Clum's books include Gay Drama Now, Still Acting Gay: Male Homosexuality in Modern Drama, Something for the Boys: Musical Theatre and Gay Culture, He’s All Man: Learning Masculinity, Homosexuality and Love from American Movies and, most recently, The Drama of Marriage: Gay Playwrights/Straight Unions from Oscar Wilde to the Present. He is the author of numerous essays on modern and contemporary British and American drama and musical theatre. His plays have been produced by a number of theatres around the United States and he has directed over seventy-five theatrical and operatic productions. His theatre blog can be found at http://clumtheater.blogspot.com.

Chapter Three: “The Way We Were”: Politics, Gender, Sex and Marriage