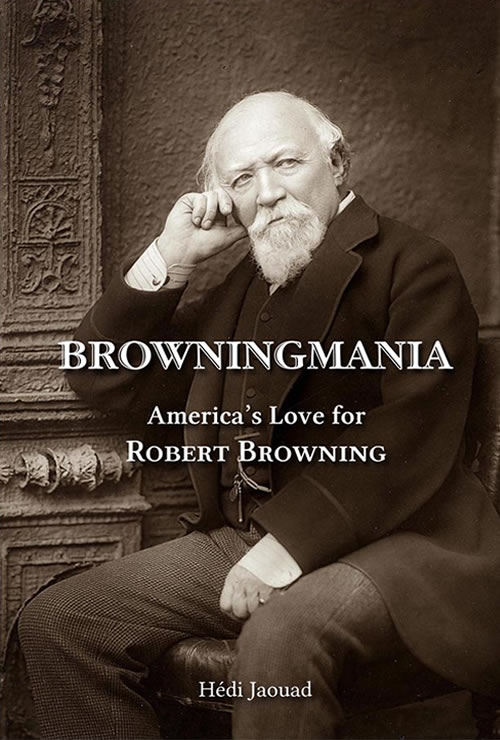 The book, the fruit of thorough and patient archival digging, brings together various fragmentary local sources and quaint memorabilia, hitherto unknown to scholars. It vividly recovers the spirit of the fascination with Robert Browning, and more broadly Victoriana, that Rochesterians and Americans in general evinced in the last two decades of the nineteenth century and early part of the twentieth century.

In the 1880s and 1890s, the Victorian poet Robert Browning was the “lion” of the day in the United States, particularly in Rochester. Browning’s work was widely read and discussed. Even today, there are still many in America who consider themselves Browningites, and many of them belong to Browning clubs and societies.

This book explores the unique set of circumstances that predisposed Rochester to become a prime location to brew this perfect storm of Browningmania. Two intriguing episodes are showcased as examples of Rochester’s sustained interest in Browning. The first concerns a pseudonymous query about the meaning of a poem by Browning that played out every day for a week in the pages of the Rochester Democrat and Chronicle during January 1886. This episode became known as the “Browning Puzzle.” In addition to the “authoritative” response of the Rochester Browning Club, no fewer than three upstate New York newspapers engaged in this collective, free-for-all interpretation exercise, a feat, to my knowledge, unprecedented and unmatched in the annals of literary criticism or journalism.

A equally important gauge of Browning’s enthusiastic and wide public reception was the well-attended four-year Browning Class at the Unity Club under the aegis of Rochester First Unitarian Church. Archival evidence from these classes indicated that the majority of enrolled students, mainly women and homemakers, sought and found in the study of Browning, hailed as a spokesman for the age, a means of self-culture and enhancement. They looked to Browning for spiritual guidance, to the chagrin of some religious circles who saw in their parishioners’ intense interest in the study of Browning a serious threat to their mission work.

The book, the fruit of thorough and patient archival digging, brings together various fragmentary local sources and quaint memorabilia, hitherto unknown to scholars. It vividly recovers the spirit of the fascination with Browningmania, and more broadly Victoriana, that Rochesterians and Americans in general evinced in the last two decades of the nineteenth century and early part of the twentieth century.

Browning’s popularity, undeserved many thought, remains nonetheless a unique phenomenon in literary and cultural history, well worthy of study and comprehension. Although several books and articles were devoted to this subject, none offers a sustained explanation of how and why Browning became such an iconic figure. This book fills a gap in the scholarship and critical reception of Browning.

This is the first study that examines Browningmania synchronically, through a local lens, as a way of understanding the phenomenon as whole. This is a classic case of a large phenomenon that began small and local (Browninmania was born on the campus of Cornell university in 1877), and quickly spread nationally and globally. This study serves as an example of how local history can help us better grasp a diffuse phenomenon such as Browningmania. This author taps into local histories, anecdotes, opinions from memoirs and news reports of lectures and essays by Browning club members and Browningites in the last decades of the nineteenth and early part of the twentieth century.

The book demonstrates that the emergence of Browningmania was more than a capricious fad but the product of a specific culture and sociology. The book brings to the fore the historical relationship of women, religion, and feminism and offers interesting sociological insights into the make-up and mindset of the readership at the time and how it interacted with texts, namely literary texts.

This study offers Browning scholars and Victorianists in general a new perspective on some long-neglected but crucial material. It will be of particular interest to students and scholars in Reception and American studies as well as cultural and literary historians. Because it brings together many local anecdotes and memorabilia, this book will also find appreciative readers among the general public, especially in upstate New York region, particularly Rochester.

Hédi Abdel Jaouad is a professor of French and Francophone studies at Skidmore College. He received his PhD in French studies from Temple University and his MA in English literature from La Sorbonne. His numerous articles, in both French and English, have been published in journals internationally. He is also the author of Rimbaud et l’Algérie and Fugues de Barbarie: les écrivains maghrébins et le surréalisme and the editor of CELAAN, a journal dedicated to the promotion of North African literature and art.

Introduction: From Anglophobia to Browningmania

Chapter 4: Solutions to “A Browning Puzzle”

Chapter 5: Browning at the Unity Club

Chapter 6: A Festival of Gratitude

Conclusion: A Browning Craze or a Rage for Elucidation?