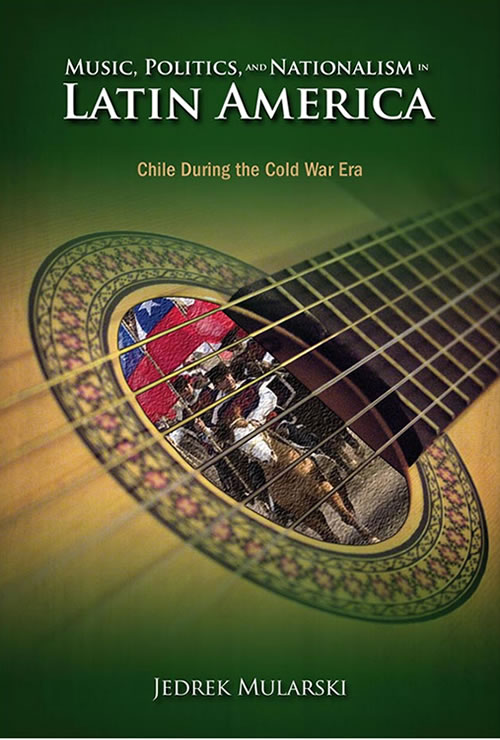 Music, Politics, and Nationalism In Latin America: Chile During the Cold War Era by Jedrek Mularski

This book illuminates a largely unexplored facet of the Cold War era in Latin America by examining linkages among music, politics, and the development of extreme political violence. It traces the development of folk-based popular music against the backdrop of Chile’s social and political history, explaining how music played a fundamental role in a national conflict that grew out of deep cultural divisions.

On September 11, 1973, a right-wing coup overthrew Chile’s democratically elected, socialist President Salvador Allende and established an eighteen-year dictatorship. The new government exiled, imprisoned, tortured, and killed Allende supporters. In addition to targeting leftist politicians and labor organizers, the new government took aim at the nueva canción (“new song”) movement. It banned this style of folk-based music, exiled many nueva canción musicians, and brutally executed Víctor Jara, the movement’s most prominent figure. Meanwhile, supporters of the coup celebrated Allende’s overthrow by blasting música típica, a different style of folk-based music, into the streets. The intensity with which Chilean rightists and leftists each came to embrace and attack different styles of folk-based music was the outcome of a historical process in which competing notions of Chilean identity became intertwined with the political divisions of the Cold War era.

To date, scholars have paid little attention to the role that music played at political rallies and protests, the political activism of right-wing and left-wing musicians, and the emergence of musical performances as sites of verbal and physical confrontations between Allende supporters and the opposition. This book illuminates a largely unexplored facet of the Cold War era in Latin America by examining linkages among music, politics, and the development of extreme political violence. It traces the development of folk-based popular music against the backdrop of Chile’s social and political history, explaining how music played a fundamental role in a national conflict that grew out of deep cultural divisions.

Through a combination of textual and musical analysis, archival research, and oral histories, Mularski demonstrates that Chilean rightists came to embrace a national identity rooted in Chile’s central valley and its huaso (“cowboy”) traditions, which groups of well-groomed, singing huasos expressed and propagated through música típica. In contrast, leftists came to embrace an identity that drew on musical traditions from Chile’s outlying regions and other Latin American countries, which they expressed and propagated through nueva canción. Conflicts over these notions of Chilenidad (“Chileanness”) both reflected and contributed to the political polarization of Chilean society, sparking violent confrontations at musical performances and political events during the late 1960s and early 1970s.

Recent studies of diplomatic and military history have shown that the Cold War in Latin America was a multifaceted contest between various regional proponents of communism and capitalism. This book adds to this new conceptualization of Latin America’s Cold War era by extending it to musical culture as well. It examines the manner by which the Chilean right attempted to undermine nueva canción music, and it disproves common perceptions that the right had no “culture” of its own by revealing that rightists labored passionately to protect and advance their own style of folk-based music. It also examines how the Allende government and nueva canción musicians worked officially and unofficially to expand their musical influence and provide “cultural assistance” to other Latin America countries. By analyzing the development of such endeavors by the right and left, Mularski reveals through the lens of music how national and transnational perspectives shaped social relationships and political conflict among rightists and leftists in Chile.

This book contributes a more nuanced conception of music, politics, and cultural nationalism. Most existing research on the cultural components of anti-imperialist movements links nationalist political and economic policies with expressions of cultural nationalism, such as “folk revivals,” generally asserting that these “folk revivals” convey nationalist and anti-imperialist perspectives by celebrating traditions of local origin rather than foreign cultural influences. Mularski demonstrates how complex local dynamics complicate the prevailing association of cultural nationalism and anti-imperialism: right-wing Chileans embraced the folk-based música típica style while at the same time crusading against the political and economic efforts of anti-imperialists, and Chilean leftists condemned imperialism while expressing a cultural identity rooted in nueva canción that was simultaneously both nationalist and transnational. In doing so, Mularski offers a powerful example and multifaceted understanding of the fundamental role that music often plays in shaping the contours of political struggles and conflicts throughout the world.

"This original and highly engaging study of the connections between Chilean music and politics is a must read for anyone interested in recent Chilean, Latin American, or cultural studies. It offers fresh insights into Chilean history, culture, and politics from the1960s to the present. An additional bonus is the author's careful and insightful discussion of the music and lyrics, which illustrates the deep connections that exist between the two and the historical context in which they were created." – Margaret Power, Professor of History, Illinois Institute of Technology

“Music played an essential role in defining identity in Chile, including one’s political alignments. In this groundbreaking book, Mularski illuminates how specific forms of music became associated with the Right and the Left and helped instill opposed political identities as the society moved into civil conflict. His extensive research includes tapping into the rich resources of obscure archives and oral histories. This book provides an original interpretation of the Allende era that is superbly told, with insights on how songs from that period still incite conflicting, politically charged emotions. However, the book covers far more than just the Allende era; it traces a background from the 1930s into a period of stunning creativity in the 1960s. This is an original and important book in the study of Latin American cultural memory.” – Michael Monteón, Professor of History, University of California at San Diego