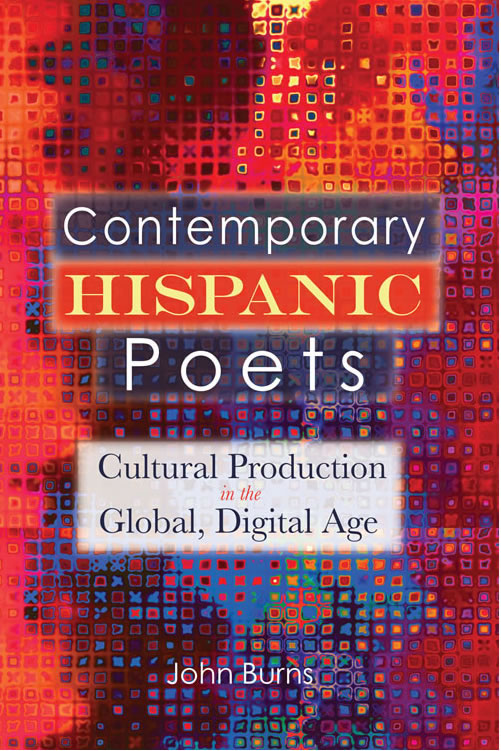 "An excellent book on a very interesting topic. ... Good scholarly books on poetry are rare. Good books on Hispanic poetry, transatlantic in content, and with a superb combination of textual analysis and theoretical reflection are even rarer, and this one belongs to the latter category." – Juan Egea, Professor of Spanish , University of Wisconsin-Madison

Poets writing in Spanish by the end of the twentieth century had to contend with globalization as a backdrop for their literary production. They could embrace it, ignore it or potentially re-imagine the role of the poet altogether. This book examines some of the efforts of Spanish-language poets to cope with the globalizing cultural economy of the late twentieth century. This study looks at the similarities and differences in both text and context of poets, some major and some minor, writing in Chile, Mexico, the Mexican American community and Spain. These poets write in a variety of styles, from highly experimental approaches to poetry to more traditional methods of writing.

Included in this study are Chileans Raúl Zurita and Cecilia Vicuña, Spaniards Leopoldo María Panero and Luis García Montero, Mexicans Silvia Tomasa Rivera and Guillermo Gómez Peña, and Mexican American U.S. Poet Laureate Juan Felipe Herrera. Some of them embrace (and are even embraced by) media both old and new whereas others eschew it. Some continue their work in the vein of national traditions while others become difficult to situate within any one single national tradition. Exploring the varieties of strategies these writers employ, this book makes it clear that Spanish-language poets have not been exempt from the process of globalization.

Individually, these poets have been studied to varying degrees. Globalization has been studied extensively from a variety of disciplinary approaches, particularly in the context of the Latin American region and Spain. However, it is a relative rarity to see poets being studied, as they are in this work, in terms of their relationship to globalization. Taken as a sample or snapshot of writing tendencies in Latin American and Spanish poetry of the late twentieth century, this book studies them as part of a greater circuit of cultural production by establishing their literary as well as extra-literary genealogies and connections. It situates these poets in terms of their writing itself as well as in terms of their literary traditions, their methods of contending with neoliberal economic models and global information flows from the television and Internet.

Although many literary critics attempt to study the connections and relationships between poetry and the world beyond the page, few monographs go about it the way this one does. It takes a transatlantic approach to contemporary Spanish-language poetry, focusing on poets on poets from Spain and the American continent, emphasizing their connections, commonalities and differences across increasingly porous borders in the age of information. The relationship between text and context is explored with a cultural studies approach, more often associated with media studies than with literary studies. Literature is not treated as a privileged object of isolated study, but rather as a system of ideas and images that is deeply interwoven with other forms of human expression that have arisen in the last decades of the twentieth century. The result is a suggestive analysis of the figure of the poet in the broader globalized marketplace of cultural goods and ideas.

"Far from an innocent cultural trifle, poetry contributes to the fundamental cultural debates of our time. With this volume, Burns likewise contributes to the fundamental cultural debate of our time, situating and imagining the poet at the center of the debate, rather than at the periphery. Foremost in these debates is the impact of five 5 “-scapes,” identified by Burns, from which our generation cannot escape: ethnoscapes, mediascapes, technoscapes, financescapes, and ideoscapes. ... By carefully evaluating each poet’s cultural place and applying his special talent for accurate translation of Spanish texts, John Burns presents a clear and detailed picture of the most influential contemporary Hispanic poets of the current global and digital age." —Rocky Mountain Review

"John Burns’ study of Hispanic poetry from Chile, Mexico, and Spain employs a cultural studies approach in its analysis of recent poetic production in Spanish. It is innovative in its transatlantic scope, and is a valuable contribution to attempts to reconsider the role and status of the poet in globalized-— and especially neoliberal-—socioeconomic context ... And while the poets studied in this book demonstrate varied lived and literary responses to globalization, the Internet, and other technological innovations, the contribution of this book lies precisely in the fine readings of each Latin American or Spanish artist’s individual, nuanced responses to these larger socio-economic realities." —A contra corriente

"This is an excellent book on a very interesting topic. It is a well-conceived, well-researched, and well-written study covering a number of very significant poets in the Spanish-speaking world. Good scholarly books on poetry are rare. Good books on Hispanic poetry, transatlantic in content, and with a superb combination of textual analysis and theoretical reflection are even rarer, and this one belongs to the latter category. This book will have a significant impact in several fields of study, from, or course, Hispanism, to Global, Transatlantic and Literary Studies in general. The selection of exemplary texts and authors (whether canonical or less-known poets) is one of the strengths of this book. It will refresh the critical corpus on well-established names within Chilean, Spanish or Mexican American letters (Zurita, Panero, Gómez-Peña, and, to some extent, García Montero) and add to the critical literature on less-studied authors (Vicuña, Tomasa Rivera, Herrera). Praiseworthy is also how these poets are grouped or isolated in their respective chapters and how their production is then linked to the specific questions posed, from the combination of madness, the idea of the 'national' poet and neoliberalism, to the intriguing possibility of identifying a ‘lyrical globalized theory.’ The work on the glocal and on a ‘globalized indigenism’ completes this very important and suggestive study of the lyric genre as it is conceived, produced and circulated nowadays in the Spanish-speaking world. Stylistically, the author has done a superb job. This is academic prose in which sophistication is not purchased at the expense of clarity. Always elegant and effective, the scholarly writing in fact displays frequent moments of brilliance; for example, the way pathology, poetry and neoliberalism are connected or how hybridity is discussed. This book is a significant contribution to the field.” – Juan Egea, Professor of Spanish, University of Wisconsin-Madison

John Burns is Associate Professor of Spanish and Chair of the Department of Languages, Literatures, and Cultures at Rockford University. He holds a PhD from University of Wisconsin-Madison. Recent publications include a collaboration with Rubén Medina on Una tribu de salvajes improvisando a las puertas del infierno: antología Beat, an extensive anthology of Beat poetry they compiled, translated into Spanish and annotated, published by Aldus/UANL in 2012. Dr. Burns has published in several journals such as 1616: Anuario de Literatura Comparada and International Film.

Introduction: Re-imagining the Poet in the Global Marketplace

Chapter 2: SilviaTomasa Rivera: A Stubborn Poet on the Local Side of the Glocal

Chapter 4: Poets of the Mediascape