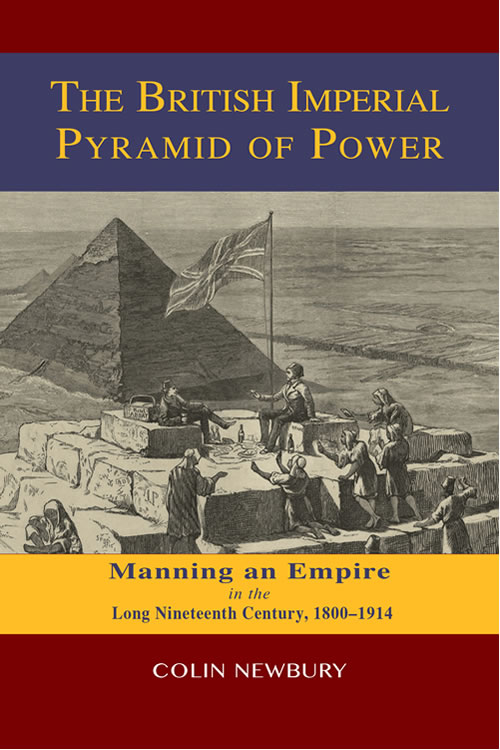 The British Imperial Pyramid of Power: Manning an Empire in the Long Nineteenth Century, 1800–1914 by Colin Newbury

“This book encompasses a wide range of detail from the complex history of British imperialism and combines this with a systematic analysis of subordinate categories and issues. ... This monumental study has a wide sweep both over chronological time and geographically.” – Raymond E. Dumett, Purdue University

This study aims at revising past and current emphasis on central and official British imperial establishments in the metropolis. The focus incorporates both central and peripheral manning techniques in London and in overseas territories. By using archival and published sources for the military, technical, medical and other professional cadres, plus the manpower enslaved, indentured or employed in executive categories, the study is intended to broaden our understanding of the base and middle strata of the imperial “pyramid”.

Thus, imperial governance as it developed over the century and before the First World War can be seen to rest on a number of assumptions, inherited and modified from three centuries of experience of piracy and settlement overseas. First, use of the Royal prerogative by the English monarchy gave a form of legitimacy to establishing settlements in North America and the British Caribbean. The practice was extended to chartered corporations, notably the East India Company, and to other privileged adventurers in West African trade. The prerogative assigned to overseas governors through their commissions and instructions created agents abroad, leading to serious tensions between royal governors and local assemblies over taxation for defence, loss of the American colonies, and methods for governing captured possessions in wars with other European powers.

Constitutional changes in the United Kingdom between Crown, Parliament, and Cabinet transferred selection of governors to ministers as secretaries of state at the Colonial and Foreign Offices from 1801 and at the India Office from 1850. As the number of territories grew, there was greater reliance on the exercise of governors’ patronage and diplomatic management of demands for responsible government, by concession, as in the Canadian provinces, or refusal, as in much of the British West Indies. The difficulty of finding suitable governors, either by nomination, or by competitive examination (as in British India), forced a revision of methods of selection towards the end of the century at the height of imperial jingoism. Even so, there was a continuous problem of arranging a supply of capable men to meet demand.

Moreover, in the course of the century the end of slave trading and slave ownership in most British territories resulted in reliance on a reservoir of indentured manpower in India and elsewhere for production of staples. In West Africa, there was greater reliance on interior networks of local traders using head loading by slave carriers. In East and Central Africa, the government made use of surrogates in the form of companies and missionary societies to mark out spheres of interest. Everywhere, there was continuous enlistment and incorporation of indigenous hierarchies for judicial and taxation purposes, liberated slaves, Creoles, and time-expired indentured labour as local executive personnel, especially in Crown Colony settlements. From similar sources, there was recruitment for military purposes, particularly in the creation of West India Regiments, the King’s African Rifles, and an Indian Army to control revolts and “small wars” and for strategic dominance of imperial frontiers and trade routes.

The study concludes with a comparison between Colonial Office and India Office methods of manning their respective empires and evaluates the role of European technology in arms, medical practices, communications, and mining concessions.

The British Pyramid of Power is an essential revaluation of British imperial methods that has a place in university and public libraries with alongside works on Africa, Southeast Asia, India, Ceylon, the Pacific, and British North America.

See also Patronage and Politics in the Victorian Empire.

Note: a web appendix in PDF format is available with this book. Please click here to download.

Educated at Otago University and the Australian National University, Colin Newbury has taught at the University of Ibadan in Nigeria and held visiting professorships at Duke University, the University of Hawaii, the Hoover Institution for War and Peace, and the University of the Pacific at Noumea, New Caledonia. Formerly university lecturer in Commonwealth History at Oxford University, he is emeritus fellow of Linacre College. His major publications include books and journal articles for the Hakluyt Society, Routledge, Oxford University Press, and books on African, Pacific and Imperial history and business history, including Tahiti Nui: Change and Survival in French Polynesia 1767–1945; The Diamond Ring: Business, Politics, and Precious Stones in South Africa 1867–1947; Patrons, Clients, and Empire. Chieftaincy and Over-rule in Asia, Africa, and the Pacific; and Patronage and Politics in the Victorian Empire: the Personal Governance of Sir Arthur Hamilton Gordon (Lord Stanmore) .

Chapter 6: Manpower in Malaysia and the Pacific

Chapter 7: Technologies and Manpower in Africa

Chapter 8: The Bureaucratisation of Patronage