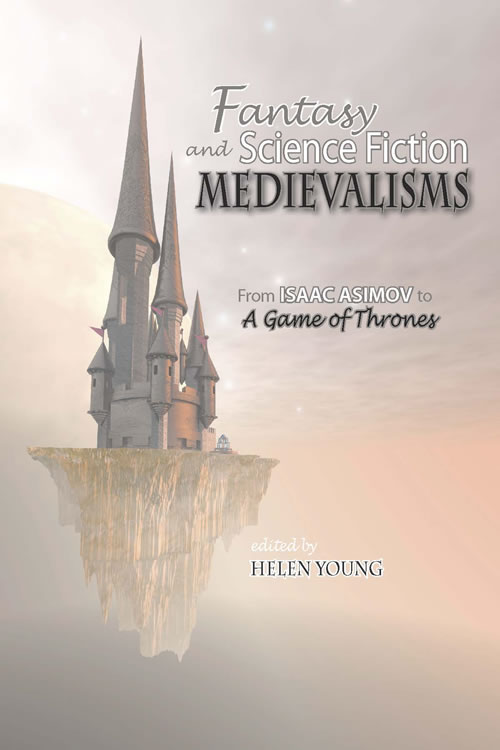 Fantasy and Science Fiction Medievalisms: From Isaac Asimov to A Game of Thrones by Helen Young

"An excellent collection ... As with her other collection of essays, Young here offers much to our continuing discussion of medievalism in its many forms and iterations, and for that we are deeply in her debt." —Arthuriana

This book is in the Cambria Studies in Classicism, Orientalism, and Medievalism book series (General Editor: Nickolas A. Haydock).

From advertisements to amusement parks, themed restaurants, and Renaissance fairs twenty-first century popular culture is strewn with reimaginings of the Middle Ages. They are nowhere more prevalent, however, than in the films, television series, books, and video games of speculative genres: fantasy and science fiction. Peter Jackson’s The Lord of the Rings and The Hobbit film trilogies and George R. R. Martin’s multimedia Game of Thrones franchise are just two of the most widely known and successful fantasy conglomerates of recent decades. Medievalism has often been understood as a defining feature of fantasy, and as the antithesis of science fiction, but such constructs vastly underestimate the complexities of both genres and their interactions. “Medieval” has multiple meanings in fantasy and science fiction, which shift with genre convention, and which bring about their own changes as authors and audiences engage with what has gone before in the recent and deeper pasts.

For several decades after medievalism was established as a field of legitimate scholarly inquiry in the 1980s and 1990s, popular culture iterations were largely viewed with some suspicion if not outright disdain. The twenty-first century, however, has seen growing recognition of the importance of what has been termed the “neomedieval”: medievalisms which playfully reimagine the past rather than attempting historically accurate re-creation.

Science fiction and fantasy, with their necessarily impossible worlds, are perhaps the ultimate in neomedievalism. Earlier volumes have examined some of the ways in which contemporary popular culture re-imagines the Middle Ages, offering broad overviews, but none considers fantasy, science fiction, or the two together. The focused approach of this collection provides a directed pathway into the myriad medievalisms of modern popular culture. By engaging directly with genre(s), this book acknowledges that medievalist creative texts and practices do not occur in a vacuum, but are shaped by multiple cultural forces and concerns; medievalism is never just about the Middle Ages.

Studies of genres, moreover, often focus on a single medium—fiction, film, or television. Each section, and some individual chapters in the volume explores at least two, reflecting the multimedia nature of contemporary popular culture in general and genres in particular. By exploring the way medievalist discourses travel and shift across media within connected genres, the volume explores some of their internal complexities.

Studies of popular genres illuminate social and cultural trends and concerns, while medievalisms reveal far more about the milieu in which they were created than they do about the Middle Ages. By exploring how popular genres develop, pulling on and being pushed by changing approaches to “the medieval,” this collection sheds light on twenty-first century popular culture’s dynamic and at times conflicting moves, and those of the society which creates and consumes it. Individual chapters take diverse approaches, both synchronic and diachronic, some offering detailed case studies and others broader reviews of themes and trends. The variety enables a detailed picture of the complexities of fantasy and science fiction medievalisms to emerge.

The first section explores the reception of J. R. R. Tolkien’s The Lord of the Rings, the two chapters together demonstrate that fantasy’s “Tolkienian” medievalism is not that of a single author, but of many readers and creators making and remaking it in different media. The second shows that the dark and dirty medievalism of Game of Thrones and the subgenre of gritty fantasy is complex and at times contradictory. It illustrates the impact of market trends and forces on popular culture texts and the ways they are understood to engage with the past. The third section demonstrates that medievalism has been at the heart of science fiction since the ‘Golden Age’ of the 1960s, and illustrates that use of medieval material and reference points connects it with fantasy as much as it separates the two genres. The final chapter shows that in the twenty-first century, fantasy definitions of medievalisms are expanding to include more than just references to the European Middle Ages which have long been conventional in the genre.

Fantasy and Science Fiction Medievalisms will be of much interest to scholars of fantasy and science fiction, and of medievalism.

The Middle Ages in Popular Culture: Medievalism and Genre

"Fantasy and Science Fiction Medievalisms borrows a page from Umberto Eco’s Travels in Hyper Reality (English translation 1986), where the Italian semiotician and cultural critic spoke of the multiple dreams of the Middle Ages that the post-medieval world advances. Young’s introduction speaks of such dreams as she explains the rationale behind her decision to divide the essays in this equally excellent collection into four sections. ... As with her other collection of essays, Young here offers much to our continuing discussion of medievalism in its many forms and iterations, and for that we are deeply in her debt." —Arthuriana

Chris Bishop is Lecturer in Classics at the Australian National University. Dr. Bishop’s previous publications include Text and Transmission in Medieval Europe and articles in journals such as Studies in Medievalism, Neuphilologische Mitteilungen, and the International Journal of Cultural Studies.

Margarita Carretero-González is Senior Lecturer in English Literature at the English and German Department of the University of Granada (Spain). She has published both nationally and internationally on J.R.R. Tolkien, fantasy fiction, children’s literature, film adaptations, ecocriticism and ecofeminism.

Shiloh Carroll holds a PhD in English from Middle Tennessee State University. Her previous publications have appeared in George R.R. Martin and the Medieval Literary Tradition, Slayage, Mythlore, and The Journal of the Fantastic in the Arts.

Andrew B.R. Elliott is Senior Lecturer in Media and Cultural Studies at the University of Lincoln (UK). He is author of Remaking the Middle Ages: The Methods of Cinema and History in Portraying the Medieval World and editor of Playing with the Past: Digital Games and the Simulation of History and The Return of the Epic Film: Genre, Aesthetics and History in the 21st Century.

Geoffrey B. Elliott is Visiting Assistant Professor of English at Oklahoma State University in Stillwater, Oklahoma. He earned his PhD and MA at the University of Louisiana at Lafayette and his work has been published in CCC, The Explicator, Studies in Fantasy Literature, and online.

Gillian Polack has doctorates in history and in English and a Master of Arts in medieval studies. She is a writer and a historian and is based at the Australian National University, Canberra, Australia. Her publications include The Middle Ages Unlocked and Five Historical Feasts.

Don Riggs is Professor of English at Drexel University and holds a PhD in comparative literature from the University of North Carolina-Chapel Hill. His previous publications include Bilateral Asymmetry: Poems and Uncommonplaces: Poems of the Fantastic, as well as articles in journals including Journal for the Fantastic in the Arts, Journal of Modern Literature, Extrapolation, and The Sixteenth Century Journal.

Kris Swank is Library Director at Pima Community College. She holds an MLS from the University of Arizona, an MBA from Thunderbird School of Global Management, and an MA in English with a concentration in Tolkien Studies at Mythgard Institute. Her essays on fantasy literature have appeared in Tolkien Studies, Mythlore, and she has written for Library Journal, American Libraries, and other professional library publications.

Part I: The Afterlives of Middle-earth

Chapter 1: Low-Culture Receptions of Tolkien’s High Fantasy: “You Can’t Always Get What You Want…” (Chris Bishop)

Chapter 2: Tolkien After Tolkien: Medieval and Medievalist Intertexts in Peter Jackson’s The Lord of the Rings (Margarita Carretero-González)

Chapter 5: Our minds are in the gutter, but some of us are watching Starz…: Sex, Violence and Dirty Medievalism (Andrew Elliott)

Chapter 6: Empire and After: Science Fiction’s Medievalism in the Golden Age and Beyond (Donald Riggs)