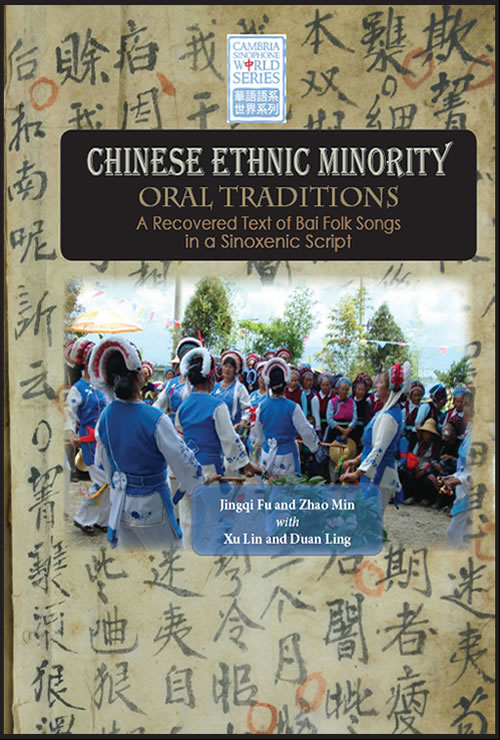 “An invaluable source for scholars working on Bai culture, linguistics, and performing arts.....the volume is a remarkable achievement and has enabled international scholars to access an important historical document that might have otherwise been lost or inaccessible... a crucial source for any scholar working on Bai culture and linguistic research in Yunnan and will make an important addition to libraries that specialize on minority nationalities of southwest China.” —CHINOPERL: Journal of Chinese Oral and Performing Literature

In 1958 while conducting fieldwork in Yunnan, a professor came across a ricepaper booklet with strange script created from Chinese characters. This turned out to be a folksong booklet in Old Bai script. She safeguarded it carefully through the tumultuous Mao years until the 1990s, when the political environment had relaxed enough for her to conduct full-scale ethnographic research. Very few such texts remain, and what makes this booklet even more valuable is that it records songs that have already disappeared, including some with sexually explicit content.

In this unprecedented book on the oral traditions of the ethnic minority of China, representing decades of painstaking research, the Old Bai script has not only been transcribed and translated in both English and Chinese but each page from the original booklet has also been reproduced.

The introduction begins with a process of textualization, recounting the origin of the written song text. Details are supplied about the chain of collectors and researchers working on the project since the early 1950s. This is an excellent example of textual provenience. A brief but useful introduction to the Bai people and history, noting some issues with ethnic identity and contact with Han Chinese culture, is also included. There is a helpful, succinct discussion of the linguistic placement of Bai, followed by a more comprehensive introduction to the Yunlong dialect of Bai—the dominant dialect which the text reflects. Mention is also made of the Great Volumes Tradition, which was also sometimes written in a special register of Chinese characters. Emphasis is placed on “created characters” utilized in the Bai/Han Chinese script.

The next section is on Bai folklore and culture, with a discussion on traditional performance genres, in particular antiphonal singing, of which these songs are a part. The book delves into the possibilities of how the songs got into the written form in relation to behavior of Bai local elites. The authors also note the decline of the local song tradition in recent years.

The following section introduces the Bai song format in a clear and useful fashion, followed by a section covering the use of Chinese Character-based Bai writing, giving more than two hundred examples—this section will be of most use to linguists. The authors note the use of 150 “created characters” in the text out of approximately 500 “individual characters” in the text, and included are the opinions of Chinese linguists on the phenomenon along with a discussion of how this text of the 1930s utilizes some “simplified” characters, anticipating developments in script reform after 1949. The songs are presented in a multilinear format that includes the Bai text, an IPA version of the sound, a word-for-word Chinese line, a word-for-word English line, and vernacular (Standard) Chinese line and vernacular English translation. Although this is easy to follow by linguists, the book also includes a very helpful appendix with only the vernacular English for easier access to the songs for other groups of readers (e.g., teachers of folklore classes).

This book will be an important, if not essential, addition for scholars and students of Asian studies, ethnic studies, folklore, and linguistics.

“The Bai (formerly known as the Minjia people) are recognized as one of China’s fifty-five minority nationalities and live in the western region of Yunnan in southwest China...this volume contains an introduction chapter and texts for 208 folk songs of the Bai nationality. The volume represents the fruits of efforts put in by four scholars (from two generations) over a ten-year period. Their primary purpose in publishing this volume was the reproduction and annotation of a source booklet of hand-written song lyrics in Bai script dating around the 1930s. A majority of the song texts contained in the original booklet were previously undocumented and lost to living Bai communities, making this volume an invaluable source for scholars working on Bai culture, linguistics, and performing arts...For scholars interested in Bai culture, this book and the song lyrics contained within offer a fascinating window into a Bai (or at least a regional Yunlong Bai) way of understanding the world. The verses contain clues about Bai culture and customs, such as the practice of drafting young men into the local militia and complaints that young women have about living with and being treated poorly by their in-laws. The song lyrics demonstrate frequent use of metaphor and double meaning, such as the way that the phrase 'to sing the wrong song' can be used to mean 'pursuing the wrong lover.' For linguists, this volume unearths a treasure-trove of knowledge about how the Bai language was written and spoken by Bai elites from the southern (Yunlong) dialect group prior to the establishment of the People’s Republic of China. The volume explains how the Bai writing system, known as Baiwen, was developed by Bai elites around the seventh century through the borrowing and modification of the Chinese character system. Particularly interesting for linguists and Baiwen researchers is the high percentage of newly created characters used in the Bai song texts...the volume is a remarkable achievement and has enabled international scholars to access an important historical document that might have otherwise been lost or inaccessible. For scholars with interest in ethnicity, heritage, and regional diversity in China and elsewhere, this volume speaks to the diversity within minority groups, even those that are seen by the state as homogenous. It reveals the multiplicity of Bai identities that exist in western Yunnan, in terms of regional dialect, historical change and migration, as well as class. This book is a crucial source for any scholar working on Bai culture and linguistic research in Yunnan and will make an important addition to libraries that specialize on minority nationalities of southwest China.” —CHINOPERL: Journal of Chinese Oral and Performing Literature

Jingqi Fu is Professor of Chinese at St. Mary’s College of Maryland. She holds a PhD from the University of Massachusetts at Amherst, a Nouveau Doctorat from Université de Paris III (Sorbonne), and a BA in French from the Beijing Institute of Languages. She has published in English, French, and Chinese in the areas of Chinese syntax, Bai syntax, nominalization, language contact, and syntax-morphology interface. Her research interests include typology, Tibeto-Burman languages, language preservation, and documentation.

Zhao Min is a literary historian and a native of Yunlong County, Yunnan. He is the director of the Research Institute of Nationality Cultures at Dali University in Yunnan. He has been the leading researcher in several state-funded research projects and authored numerous articles and books, including Salt and Horse Caravan Routes and Ethnic Societies on the Yunnan Southern Borders.

Xu Lin (1921–2005) was a Bai linguist and a pioneer in Bai language studies. As a member of the Chinese Academy of Social Sciences, she was part of the Ethnic and Linguistic Survey of the early 1950s. She coauthored two standard Bai reference books, The Survey Grammar of the Bai Language and Bai-Chinese Dictionary. She has published numerous articles on Bai and Lisu languages and folklore.

Duan Ling (1939–2012) was a folkorist, musician, and linguist with wide-ranging publications on Bai dialects and other minority languages such as Lisu, Nu, and Dulong; Bai tunes and poetry; and Bai rituals. He was the author of On the Rhyme and Structure of the Bai Tunes and Primitive Religious Practices of Lemo Bai and coauthor of Dialects of Dali Bai Autonomous Region.

Section 4: English Translations of Loose Pages in the Booklet