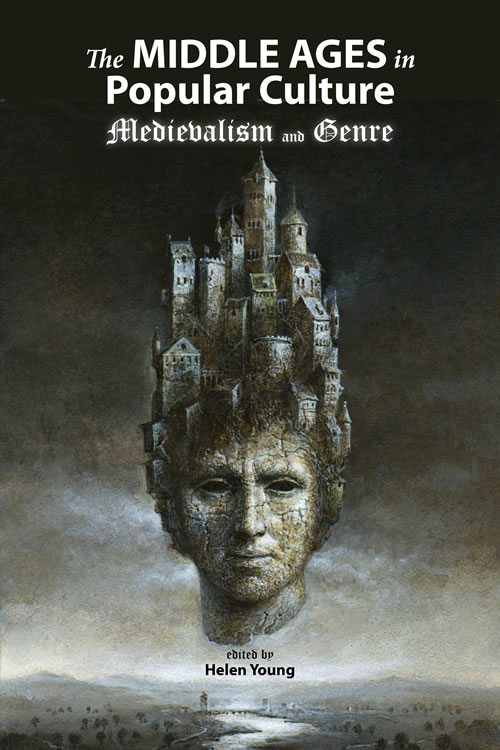 The Middle Ages in Popular Culture: Medievalism and Genre by Helen Young

"Helen Young is indefatigable. She has published, almost simultaneously, two excellent complementary edited collections of essays that discuss many of the subfields of medievalism. The Middle Ages in Popular Culture: Medievalism and Genre offers nine essays that engage what Young calls ‘the multiple Middle Ages’ (1). ... the uniformly excellent essays in this volume make a very strong case for the multiplicity of Middle Ages that Young’s introduction postulates." —Arthuriana

This book is in the Cambria Studies in Classicism, Orientalism, and Medievalism book series (General Editor: Nickolas A. Haydock).

Contemporary Western society is in the midst of an efflorescence of medievalism, from political rhetoric to the names of sports teams, advertising, and themed restaurants, to the pages and screens of popular culture. Medievalism in the twenty-first century is layered, folding into itself the practices, processes, and representations of earlier eras, as well as those of the time and place in which it is produced. Reimagining history for mass consumption has as much, if not more, to do with the needs and wants of the present than with any historical reality. Profit and pleasure define popular culture, and genres are a major framework organizing the making of both: creative industries use them to make the former, and consumers to help find the latter. When the Middle Ages are reimagined in popular-culture contexts, they are shaped by the genre in which any individual creative work is produced and consumed. The nexus of medievalism and popular genres is the focus of this collection, which interrogates the interplay between past and present in mass culture.

Studies of popular culture medievalisms have not, to date, examined the interconnections of the two in any organized fashion, yet genre is a major framework structuring representation, production, consumption, and the making of meaning in popular culture. The conventions of any genre shape, even if they do not entirely circumscribe, what is possible in any constitutive creative work—this is as true of medievalism as it is of any other element—while genres themselves are shaped by the anxieties of the society which creates them. Given that a high proportion of today’s popular culture medievalisms are filtered through genre, this volume’s exploration of their interconnections sheds light not only on the nature of both, but on social issues and identity constructs of the present cultural moment.

Rather than focusing on the medievalism of a single genre, this volume puts multiple genres in dialogue and considers both medievalism and genre to be frameworks from which meaning can be produced. Chapters in it explore works from a wide range of genres—children’s and young adult, historical, cyberpunk, fantasy, science fiction, romance, and crime—and across multiple media—fiction, film, television, video games, and music. The range of media types and genres enable comparison, and the identification of overarching trends, while also allowing comparison of contrasting phenomena.

As the first volume to explore the nexus of medievalism and genre across such a wide range of texts, this collection illustrates the fractured ideologies of contemporary popular culture. The Middle Ages are more usually, and often more prominently, aligned with conservative ideologies, for example around gender roles, but the Middle Ages can also be the site of resistance and progressive politics. Exploring the interplay of past and present, and the ways writers and readers work engage with them demonstrates the conscious processes of identity construction at work throughout Western popular culture. The collection also demonstrates that while scholars may have by-and-large abandoned the concept of accuracy when considering contemporary medievalisms, the Middle Ages are widely associated with authenticity, and the authenticity of identity, in the popular imagination; the idea of the real Middle Ages matters, even when historical realities do not.

The Middle Ages in Popular Culture: Medievalism and Genre will be of interest to scholars of medievalism, popular culture, and genre.

Fantasy and Science-Fiction Medievalisms: From Isaac Asimov to A Game of Thrones

"Helen Young is indefatigable. She has published, almost simultaneously, two excellent complementary edited collections of essays that discuss many of the subfields of medievalism. The Middle Ages in Popular Culture: Medievalism and Genre offers nine essays that engage what Young calls ‘the multiple Middle Ages’ (1). ... the uniformly excellent essays in this volume make a very strong case for the multiplicity of Middle Ages that Young’s introduction postulates." —Arthuriana

Alana Bennett is an MA student and future Wolfson-funded doctoral candidate at the University of York. She holds a BA (Honours) from the University of Western Australia, where she has also lectured and taught. She has previously published with Limina Journal and is a cofounder of Ceræ Journal.

Molly Brown is a Professor and Head of the Department of English Language and Literature at the University of Pretoria and her primary research interest is in fantasy whether written for adults or children. She teaches an Honors course in children’s literature and has supervised postgraduate research in the field. She has delivered papers at various international conferences and has published articles in a number of peer-reviewed journals including The Lion and the Unicorn, Mousaion, The English Academy Review and Papers: Explorations into Children’s Literature.

Emmanuel Buzay is a visiting assistant professor in the French and the Comparative Literary and Cultural Studies sections of the Department of Literatures, Cultures, and Languages at the University of Connecticut. He holds a PhD from the University of Connecticut, a D.E.A. from the Université de Paris XIII–Villetaneuse, and a Maîtrise from the Université de Paris III–Sorbonne Nouvelle. Dr. Buzay has published in journals such as Contemporary French & Francophone Studies: SITES, Nouvelles Francographies, and Sciences Humaines and has given talks at several of the International Colloquia of 20th and 21st Century French and Francophone Studies and several of the SPFFA Colloquia.

Geneva Diamond is an assistant professor of English literature at Albany State University, Georgia. She holds a PhD, two MAs, and a BA from the University of Kansas. She has presented on medievalism in Harlequin romance novels and Julie Garwood romance heroines at the Georgia Medievalists Group Conference and the Kalamazoo International Congress on Medieval Studies.

Judy Ann Ford is a professor of history at Texas A&M University–Commerce. She holds a PhD and an MA from Fordham University and a BA from St. John’s University in New York City. Dr. Ford’s scholarship focuses on both popular religion in late medieval and early modern England and on modern fictional representations of the Middle Ages, especially those of J. R. R. Tolkien. She has published in several journals including Tolkien Studies, Journal of Popular Culture, and Renaissance and Reformation. Dr. Ford also codirected two National Endowment for the Humanities Summer Institutes for School Teachers on Tolkien.

Rebecca Hutton is a PhD candidate in the School of Communication and Creative Arts at Deakin University, Melbourne. She holds a Bachelor of Arts and BA (Honours) from Deakin. She has authored or coauthored papers on young adult texts that have been published in Interjuli, The Encounters: Place, Situation, Context Papers, and Deletion.

Anne McKendry holds a PhD from the University of Melbourne and an MA from the University of Sydney. Her publications include “Mateship in the Middle Ages: The Australianness of William Wallace, William Thatcher, and Robin Longstride” in International Medievalism and Popular Culture, edited Louise D’Arcens and Andrew Lynch (Cambria, 2014).

Robin Anne Reid is a Professor in the Department of Literature and Languages at Texas A&M University–Commerce. Her teaching areas are creative writing, critical theory, and marginalized literatures. Her research interests include queer theory, intersectionality, digital literary studies, fan studies, and Tolkien studies. Dr. Reid edited the first encyclopedia on Women in Science Fiction and Fantasy.

Carol L. Robinson is an associate professor at Kent State University. She holds a PhD and an MA from the University of Georgia. Her research interests include medievalism, film, video games and American Deaf culture literature. Her publications include Neomedievalism in the Media: Essays on Film, Television, and Electron Games as well as articles in journals such as Studies in Medievalism.

Chapter 5. Reinventing the Past in European Neo-medieval Music (Alana Bennett)

Chapter 7. The Cyberpunk Road away from Middle-earth toward Virtual Atonement: A Quest-Pilgrimage and Surgical-Torture of Transient Transcendence between the Boundaries of Gender and Sexuality in William Gibson’s Fiction and the Wachowski Sibling’s Films (Carol Robinson )

Chapter 8. Medievalism, the Detective, and the Quest for Whodunnit (Anne McKendry)

Chapter 9. King Arthur and the Knights of the Postmodern Fable: Folding the Dead (Molly Brown)