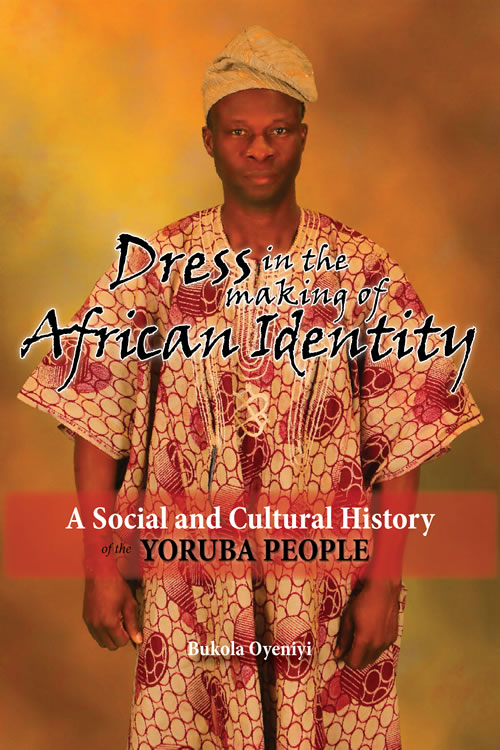 Dress in the Making of African Identity: A Social and Cultural History of the Yoruba People by Bukola Oyeniyi

This book on the social and cultural history of Yoruba people illuminates the impact of Christianity, Islam, and British colonialism on the construction of Yoruba identity, and how dress was entangled in that construction. It also demonstrates the importance of dress as a site for contesting and articulating postcolonial Yoruba identity and class structure within the Nigerian national space.

This book is in the Cambria African Studies Series (general editors: Toyin Falola and Moses Ochonu).

This is a book on the social and cultural history of Yoruba people, a people in southwest Nigeria. As the first to provide a comprehensive treatment of Yoruba dress in historical perspective, this book is an important contribution to African history in general and the Yoruba cultural history in particular.

The book illuminates the impact of Christianity, Islam, and British colonialism on the construction of Yoruba identity, and how dress was entangled in that construction. It also provides insightful discussions of the transformations in dress culture since independence and demonstrates the importance of dress as a site for contesting and articulating postcolonial Yoruba identity and class structure within the Nigerian national space.

A number of determinate historical changes have occurred in Yorubaland that impact and continue to impact on dress; these include the coming and spread of Islam and Christianity, colonization and western education, independence, and military rule, and they foisted fundamental roles on Yoruba dress culture.

Prior to 1880, to consider briefly one interesting example, nationalism in Nigeria took another turn, as nationalists advocated for a return to Yoruba culture, especially in language and dress. Among other things, they argued that Western dress was unsuitable, unhealthy, and incommodious to the tropical climate of Yorubaland. Consequently, they used all kinds of Yoruba dress to vocalize their nationalist agitations; consequently, Yoruba dress assumed a different role in the nationalist discourse. How have these developments played together to create, establish, reinforce, or alter individual and group identities of Yoruba people? How do these developments affect dress, views to dress, and personal/individual and group identity construction in Yorubaland?

As this book shows, issues such as family life, position in the society, occupation, religious belief, among many factors also influence or affect dress and decisions about dress. In the light of this, how is dress used in establishing, announcing or concealing individual and group identities? Given how it is part of Yoruba culture to demonstrate age, sex, religion, power, status, and wealth through sartorial tradition, given, especially the non-permanent nature of clothing; how have the various changes affected dress in relation to identity construction?

This book provides many insights into these issues and is thus an invaluable addition to Africana studies, anthropology, and history.

Bukola Oyeniyi is a professor of history at Missouri State University. Dr. Oyeniyi holds a PhD from the Universiteit Leiden in the Netherlands. He was a Fellow at the Institute for Advanced Study in Bucharest, Romania and the winner of the Samuel Nkoli Africanist Award.

Chapter 2: The Provenance of Dress in Yorubaland

Chapter 6: The Politics of Power in Yoruba Dress