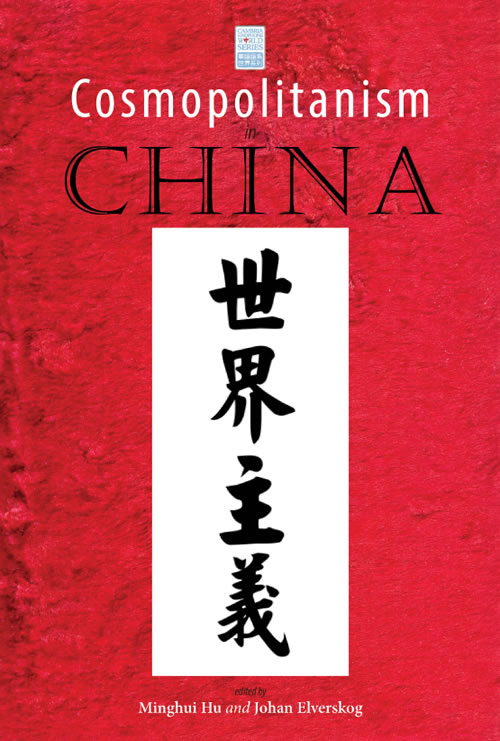 Cosmopolitanism in China, 1600–1950 by Minghui Hu and Johan Elverskog

In the wake of the Soviet Union’s collapse and the ethno-nationalist turbulence it unleashed, there arose two distinct but interrelated scholarly enterprises. One aimed to explain these eruptions by investigating the categories and creations of various ethnic and national claims, while the other, with much the same goal in mind, explored these fissures and juxtaposed them with the paradigm of cosmopolitanism. Both approaches—which at times were in dialogue with each other, and at times not—produced a great wave of new and exciting scholarship across all the disciplines of the academy.

In the case of China, for example, the first of these approaches was instrumental in shaping the New Qing History that has radically transformed our understanding of late imperial China. However, for various reasons, scholars of the Qing did not take up the challenge of exploring the theoretical implications of cosmopolitanism in regard to China. The aim of this study is therefore to address this oversight not only by shedding new light on China from the Qing’s founding to the early years of the Republic but also to bring these realities into dialogue with the broader discourses about cosmopolitanism.

At the height of the Cultural Revolution and the Cold War in 1971, the historian Joseph Levenson made the astute observation that China used to be cosmopolitan on account of Confucianism. At that time, the notion of China, much less Confucianism, as somehow being cosmopolitan may have surprised many of his readers, especially because so many conventional ideas about China—ranging from its “kith and kin” social structure to its purportedly eternal and monolithic state structure—seem to reflect a society that was the very antithesis of cosmopolitanism.

Indeed, even now, or perhaps even more so now on account of growing Chinese nationalism, Han chauvinism, and global fears of a rising China, the idea of Chinese cosmopolitanism may strike many as ill conceived. This supposition is well borne out by the fact that one can largely search in vain the last four decades of scholarship on China to find again the three words China, Confucianism, and cosmopolitanism combined in any meaningful way. It is not only scholars of late imperial (or early modern) China who have failed to pursue Levenson’s idea; China is also woefully absent in the burgeoning scholarship in the movement known as the “new cosmopolitanism.” But Levenson, as with so much of his scholarship, was clearly on to something important. In fact, in the current academic climate it seems almost irresponsible not to address this. This volume is therefore a pioneering attempt to explore the implications and possibilities of Levenson’s potent observation regarding China in relation to the growing scholarship on cosmopolitanism around the world.

The first, and perhaps most obvious insight of this study, which is also invariably its most important contribution, is that China was in fact cosmopolitan. Of course, what that actually means and how it actually manifested is the focus of each chapter. The book is thus organized into four sections, which examine particular articulations of cosmopolitanism over the course of three centuries. The first section explores how the early Qing state and its policies were shaped by cosmopolitanism and thus enriches our understanding of both Manchu rule and the parallel practices found in other early modern territorial empires. The second section builds on this new cosmopolitan vision of the Qing empire by exploring how it intersected with the intellectual debates of leading scholars during the High Qing, such as Gong Zizhen, who changed the discourse of the literati on account of his pluralist and cosmopolitan vision. The third section expands the focus by exploring how Qing cosmopolitanism in turn shaped the interactions between Chinese scholars and politicians with their colleagues in Korea and Japan in the nineteenth century. The fourth and final section explores how Chinese intellectuals grappled with the fall of the Qing and the rise of nation-states while continuing to hold onto new forms of cosmopolitanism. Individually and collectively, these chapters provide new and important ways of conceptualizing cosmopolitanism in China and beyond.

Read excerpts from each chapter of Cosmopolitanism in China, 1600–1950

"This book provides a wide-ranging display of the ways in which 'cosmopolitanism' has meaning in China, c. 1600–c. 1900 and how these possibilities were reduced subsequently. Significantly, the volume shows the meanings of cosmopolitanism for different kinds of people in Qing China, including Manchus, Muslims, Koreans (in relation to the Qing, if not in the Qing). It further explicates the multiple framings within which different modalities of cosmopolitanism were achieved, including Buddhist and Confucian. It also shows cosmopolitanism not merely as a feature of thought, but suggests implications of such approaches in matters of governance. Creating multiple challenges to conventional views of early modern and modern China, this important book offers opportunities to craft a more sensible and persuasive understanding of how China’s early modern regional world became part of a late twentieth-century Inner Asian and East Asian world region." —R. Bin Wong, Distinguished Professor of History, UCLA; and Director, UCLA Asia Institute

"By exploring the historical links between Confucian cosmology, imperial ideology, political identities and interests, Cosmopolitanism in China changes the terms of understanding cosmopolitanism. It throws into relief the special character of cosmopolitanisms in Europe, South Asia and other parts of the world and thus begins the task of building a true cosmopolitanism for the planet." —Prasenjit Duara, Oscar Tang Professor of East Asian Studies, Duke University

"[A] handsome volume ... organized chronologically and by topics, accompanied by a short introduction by the editors plus a useful index. The volume maintains two main points. The first is that cosmopolitanism in China is not a new phenomenon ... Quite the contrary, it is argued that cosmopolitanism had been operative from the Qing dynasty up to the Early Republican period, and was challenged and brought down by precisely those radical thinkers and activists who struggled to make China a part of the family of nations. The second main point concerns the notion of cosmopolitanism itself: the editors stress the necessity of going beyond a general sensitivity towards cultural diversity and the promotion of all-inclusive universality ... Hence, their reinquiry into Qing culture searches for evidence of crucial cultural exchange and engagement, of true ethical, intellectual and moral commitment to the other, of intellectual visions that surpass the local and create something new that transcends the old, all within a process of trial and amendment. ... Taken together or read one by one, the eight chapters collected in this volume illustrate what Elverskog rightly concluded, that 'there did exist a tradition of Qing cosmopolitanism, and that the Chinese tradition has the cultural, intellectual and religious resources needed to foster cosmopolitanism.'” — Comparative Literature & World Literature

Minghui Hu is an associate professor of history at University of California Santa Cruz. He earned his PhD from the department of history at UCLA, an MA from the graduate program in science and technology studies at Virginia Tech, and a BS from the department of civil engineering at Tamkang University, Taiwan. Dr. Hu was an Andrew Mellon postdoctoral fellow, and he is the author of China's Transition to Modernity: The New Classical Vision of Dai Zhen (University of Washington Press).

Johan Elverskog is the Altshuler University Distinguished Teaching Professor and Chair of Religious Studies at Southern Methodist University. He holds a PhD and MA from Indiana University, and a BA from the University of California, Berkeley. Dr. Elverskog is the author and editor of numerous articles and books, which have won several awards and also been translated into Chinese, Korean, and Russian. These publications include Buddhism and Islam on the Silk Road, Our Great Qing: The Mongols, Buddhism and the State in Late Imperial China, and Uygur Buddhist Literature. He has also published in numerous journals such as Common Knowledge and the Journal of Asian Studies. Dr. Elverskog has been a research fellow at the Interdisciplinary Humanities Center, the Swedish Collegium for Advanced Studies, the Center for Advanced Studies in the Behavioral Sciences at Stanford University, and the Käte Hamburger Kolleg at Ruhr Universität.

Benjamin Elman is Professor of East Asian Studies and History at Princeton University. He received the Distinguished Achievement Award from the Andrew W. Mellon Foundation in 2010. His publications include From Philosophy to Philology; Classicism, Politics, and Kinship; A Cultural History of Civil Examinations in Late Imperial China; On Their Own Terms: Science in China, 1550–1900; and A Cultural History of Modern Science in Late Imperial China. He has coedited Education and Society in Late Imperial China; Rethinking Confucianism; Statecraft and Classical Learning; Rethinking East Asian Languages, Vernaculars, and Literacies; Antiquarianism, Language, and Medical Philology; and World Philology.

Stephen Roddy is Professor of East Asian literary and cultural studies at the University of San Francisco. His book, Literati Identity and Its Fictional Representations in Late Imperial China, examines several significant works of fiction in eighteenth-century China. His research centers on the nexus of literary and intellectual trends in eighteenth- and nineteenth-entury China and Japan.

Sun Jiang is Professor of History at Nanjing University. His publications include Kindai chugoku no kakumei to himitzukesya: chugoku kakumei no syakaisitekikenkyu, (Revolution and Secret Societies in Modern China: A Social History of the Chinese Revolution, 1895–1955); Kindai chugoku no shukyo, kesya to kenryoku (Religion, Society and Power in Modern China); and Chugoku no kindai o tou: Rekishi, kigoku to aidentiti (Questioning Chinese Modernity: History, Memory and Identity). He is the coeditor of Higashi Ajia ni okeru kindai chi no kukan no keisei (The formation of modern intellectual space in East Asia.

Wang Hui is Professor of Chinese Language and Literature at Tsinghua University. He is a leading member of China’s “New Left” intellectual movement and the former editor of Dushu, one of China’s most influential literary journals. In May of 2008, Foreign Policy named him one of the top 100 public intellectuals in the world. His publications in English include China’s New Order: Society, Politics and Economy in Transition; The Politics of Imaging Asia; The End of Revolution: China and the Limits of Modernity; China from Empire to Nation-State; and China’s Twentieth Century.

Chapter 8: Did the Yellow Emperor Come from Babylonia? Debating the Origins of Chinese Civilization in East Asia (Sun Jiang and Minghui Hu)