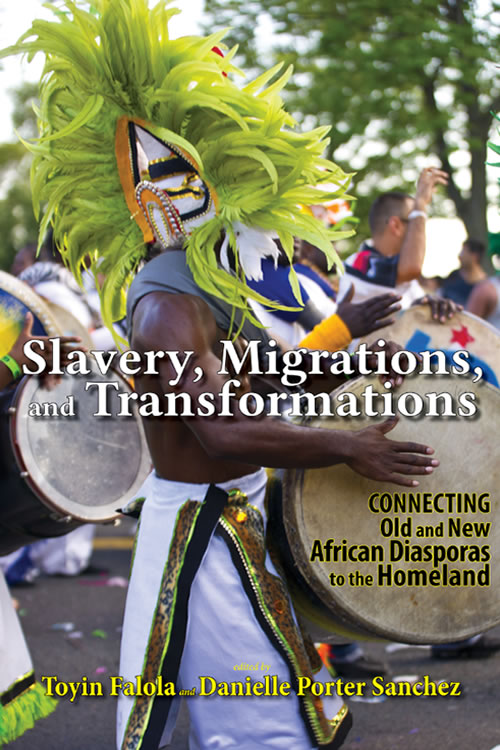 Slavery, Migrations, and Transformations: Connecting Old and New Diasporas to the Homeland by Danielle Porter Sanchez and Toyin Falola

From the historical movements of enslaved Africans to the Americas to newer migrations of Africans to spaces like Belgium and France, experiences of blackness on a global stage reflect themes of negotiation, persecution, isolation, unification, remembrance, and much more. This book is a timely and much-needed exploration of the intricate nature of culture and life in the African diaspora.

This book is in the Cambria Studies in Slavery: Past and Present Series, headed by Ana Lucia Araujo (Howard University).

Click below to watch the short video on the book.

Old and new African diasporas created by mass movements of individuals of African descent throughout the world illuminate the complexities of African and diasporic identities over time.

From the historical movements of enslaved Africans to the Americas to newer migrations of Africans to spaces like Belgium and France, experiences of blackness on a global stage reflect themes of negotiation, persecution, isolation, unification, remembrance, and much more. Yet, it is impossible to minimize the complex experiences that make up the African diaspora throughout the world, as diasporic communities face a range of struggles, specifically related to the politics of identity and connections to the continent of Africa itself.

This book is thus a timely and much-needed exploration of the intricate nature of culture and life in the African diaspora. It examines identities, collectivities, and relationships with Africa and Africans.

Previous scholarship has made important contributions to conceptualizations of the African diaspora and diasporic cultures. This study expands the scope by providing a wide range of case studies that provide important insightes into the connections between diasporic experiences, identities, and the movement of ideas. From Brussels to San Antonio, this book emphasizes the power of diasporic networks and reveals the difficulties facing black communities around the world.

This book helps fill a gap in the field by illuminating the complex experiences of blackness in a manner that motivates readers to grapple with the nuances diaspora studies and African issues on a global stage.

This book balances conceptualizations of diaspora by engaging with scholars exploring old African diasporas, newer migrations, and even regional movement within the continent of Africa itself. More importantly, the chronological breadth of the volume allows readers to explore historical matters alongside comparable contemporary issues as a way of assessing continuities and the ways in which communities continue to grapple with institutional racism, political marginalization, and negotiations between tradition and modernity on a global stage. Furthermore, the interdisciplinary nature of the book offers diverse approaches for robust engagement with African diaspora studies.

Watch the video on the Cambria Press YouTube channel.

Danielle Porter Sanchez is an assistant professor of history at Muhlenberg College. She holds a PhD from The University of Texas at Austin, a Master’s degree in Africana Studies from Cornell University, and a Bachelor’s in History from The University of Texas at Austin. Danielle Sanchez’s research focuses on daily life in Brazzaville during the Second World War. Her previous publications include African Culture and Global Politics and multiple book chapters.

Toyin Falola is the Jacob and Frances Sanger Mossiker Chair Professor in the Humanities and a Distinguished Teaching Professor at The University of Texas at Austin. He is a Fellow of the Historical Society of Nigeria and A Fellow of the Nigerian Academy of Letters. He has received various awards and honors, including the Jean Holloway Award for Teaching Excellence, the Texas Exes Teaching Award, and the Ibn Khaldun Distinguished Award for Research Excellence, and the Distinguished Fellow, Ibadan Cultural Group. Toyin Falola has published numerous books, including Key Events in African History: A Reference Guide, Nationalism and African Intellectuals, and many edited books including Tradition and Change in Africa and African Writers and Readers. He is the coeditor of the Journal of African Economic History and the general editor of the Cambria African Studies Series.

Rahel Kuflu is a doctoral student at the School of Historical and Contemporary Studies at Sodertorn University in Stockholm, Sweden. She holds a BA and MA in history from Stockholm University. Her dissertation examines the identity formations among the Protestants in colonial Eritrea. With sources written by the first generations of the so-called Kenisha themselves, as well as sources from the Swedish Evangelical Mission who at that time were active in Eritrea, she explores the discursive decolonizing processes of the Kenisha. Rahel's research interests include intersections of race and gender and black subjectivity.

Genet Lakew is a digital content producer at the National Urban League in New York City. She holds an MA in Africana Studies from New York University and an undergraduate degree in print journalism from Howard University. She is a freelance writer, with article contributions to Africa is a Country, Warscapes Magazine, and allAfrica.com, as well as a chapter on media in Ethiopia in Re-Imagining Development Communication in Africa.

Kevin Brooks is a professor of English at North Dakota State University where he teaches courses on English Studies, composition, visual culture and language, and advanced writing. He received his PhD in Rhetoric and Professional Communication from Iowa State University, a MA in English Literature from the University of Calgary, and a BA in English Literature from the University of Winnipeg. Kevin Brooks has published widely in journals, including Enculturation: A Journal of Rhetoric, Writing, and Cultur , The Journal of Popular Culture, and Composition Studies.

Céline Jacquemin is the Associate Dean for Student and Curricular Affairs and an Associate Professor of Political Science at St. Mary’s University in San Antonio, Texas. She received her PhD and MA from the University of California, Irvine. She also serves as an expert witness for political asylum cases and has published on female genital mutilation, genocide, and human rights.

Yasmina Fawaz is a doctoral candidate in the Department of French and Italian at The University of Texas at Austin. She earned a BA in English literature and French from Andrews University and an MA in French literature from the University of Georgia. Her research interests are centered around the question of identity construction in West African and Mauritian literature as well as ecocriticism.

Chantell Smith is a doctoral candidate at the University of Georgia in the Department of Romance Languages, specializing in Hispanic studies. Her research interests include contemporary Latin American narrative, Afro-Hispanic studies, and African diaspora studies. Her dissertation project examines three neoslave narratives/historical fiction novels from across the Americas and the relation of race, gender and national identity.

Chapter 1: New African Diasporas and the Development of Black Solidarity in Belgium

Chapter 3: Betwixt and Between: Creating, Negotiating, and Contesting Diaspora Identities

Chapter 4: What is a Politics of Amnesia?: Unsettled Memory and Elusive Nation in Cameroon

Chapter 5: A Kind of Homecoming

Chapter 6: Rewind and Reframe: Thoughts on Children and Contemporary Issues of Race

Chapter 7: Rwandan Government and Diaspora: Working Together to Harness the Power from Institutions Built for Unity at Home and Abroad

Chapter 8: Homeless at Heart: A Comparative Study of the Physical and Cultural Concept of the (home) Land as Depicted in Lopes’ Le Lys et le Flamboyant and Ndiaye’s En famille

Chapter 9: From Juan to Juan: The Triumph of Poet and Subject in Juan Latino's Austrias Carmen