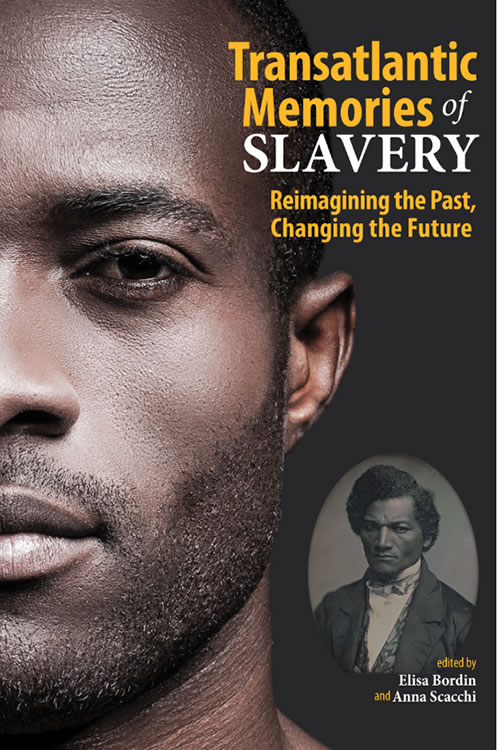 Transatlantic Memories of Slavery: Reimagining the Past, Changing the Future by Elisa Bordin and Anna Scacchi

"With great courage, sharp intuition and professional dedication they have tackled some of the most controversial issues of historical revision and imaginative projection linked to the slave trade all over the world."—European Journal of American Studies

This book is in the Cambria Studies in Slavery book series (general editor: Ana Lucia Araujo).

Slavery has become a transnational site of memory, a dialogic battlefield that is relevant not only for the descendants of the enslaved and African diasporans in general but also for the descendants of slavers and for all those countries which have benefited from the slave trade. Because of black activism in literature and the visual arts, as well as popular culture and political circles, the dialogue on slavery, though far from expressing a unified collective memory, has become prominent in the Western public sphere and is producing compelling cultural artifacts. Former slave societies which have long denied the role played by the slave trade and the labor of the enslaved in the construction of present national communities are called to confront their past and turn it into public memories. The amnesia that has conveniently made slavery invisible as the root cause of the persistent economic and social exclusion of people of African descent is being challenged by revisionary imaginative efforts, which aim to dislocate domesticating, reconciliatory versions of the past from the collective consciousness and to intervene in the mnemonic archive of slave societies in ways that are not merely psychologically healing, but also socially and culturally transformative.

For more than five decades historiographic inquiry has investigated the cultural resistance of enslaved communities, their active role in the struggle for freedom, and the emergence of a Black Atlantic culture that traversed national borders and proved integral to modernity. Previous interpretations of the slave past as an anachronistic inconsistency in the Western progress towards universal rights have been effectively refuted and the centrality of slavery to the rise of American and European capitalism, as well as to ideologies of modernity and the discourse on (white) freedom and individual rights, has become accepted academic knowledge. Yet this knowledge has not always translated into collective awareness. Narratives highlighting the role of enlightened white Euro-Americans have proved pertinacious in the recent memorializations of slavery in many countries. These narratives, however, coexist with and are disputed by alternative narratives of the past that aim to turn African descendants’ memories of slavery into shared national past. In addition, the current rememorialization of slavery in literature, the visual arts, and popular culture questions the legitimacy of accepted historical archives and pushes beyond the limits of verisimilitude and realism, with the utopian aim to provide new empowering narratives of the past for the people of African descent.

While the memorialization of slavery has generated an impressive number of publications, relatively few studies deal with this subject from a transnational, transdisciplinary and transracial standpoint. As a historical phenomenon that crossed borders and traversed national communities and ethnic groups producing alliances that did not overlap with received identities, slavery as well as its memory call for comparative investigations that may bring to light aspects obscured by the predominant visibility of US-American and British narratives of the past.

This study addresses the memory of slavery from a transnational perspective. It brings into dialogue texts and practices from the transatlantic world, offering comparative analyses which interlace the variety of memories emerging in diverse national contexts and fields of study and shedding light on the ways local countermemories have interacted with and responded to hegemonic narratives of slavery. The inclusion of Brazil and the French, English, and Spanish Caribbean alongside the United States and Europe, and the variety of investigative approaches—ranging from cinema, popular culture and visual culture studies to anthropology and literary studies—expand the current understanding of the slave past and how it is reimagined today. Transatlantic Memories of Slavery brings freshness to the topic by considering objects of investigation which have so far remained marginal in the academic debate, such as heroic memorials, civic landscape, white family sagas, Young Adult literature of slavery, Latin American telenovelas and filmic narrations within and beyond Hollywood. What emerges is a multifarious set of memories, which keep changing according to generation, race, gender, nation and political urgency and indicate the advancing of a dynamic, mobilized memorialization of slavery willing to move beyond mourning towards a more militant stand for justice.

Transatlantic Memories of Slaveryis an important book for those interested in African American, American, and Latin American studies and working across literature, cinema, visual arts, and public culture. It will also be useful to public official and civil servants interested in the question of slavery and its present memory.

Read an excerpt from this book on Nat Turner.

"With great courage, sharp intuition and professional dedication they have tackled some of the most controversial issues of historical revision and imaginative projection linked to the slave trade all over the world. ... Through the analysis of a large sample of writings, fiction and non-fiction, films, photographs, popular culture, the authors, a group of renown scholars and artists, question the legitimacy of the kept records, showing that the problem, as William Styron maintained, is not just how to portray the history of slavery, but how 'to wrestle with the incomplete project of freedom.' ... Praise be to Bordin and Scacchi for gathering such a relevant instrument of research, and for opening new perspectives in the field." (Read more) —European Journal of American Studies

Introduction: Expanding the Circle of the We (Elisa Bordin and Anna Scacchi)

Chapter 5: Which Memory? (Paulla A. Ebron)

Chapter 6: From Plantation to Screen, Outside Hollywood (Stefano Bosco)