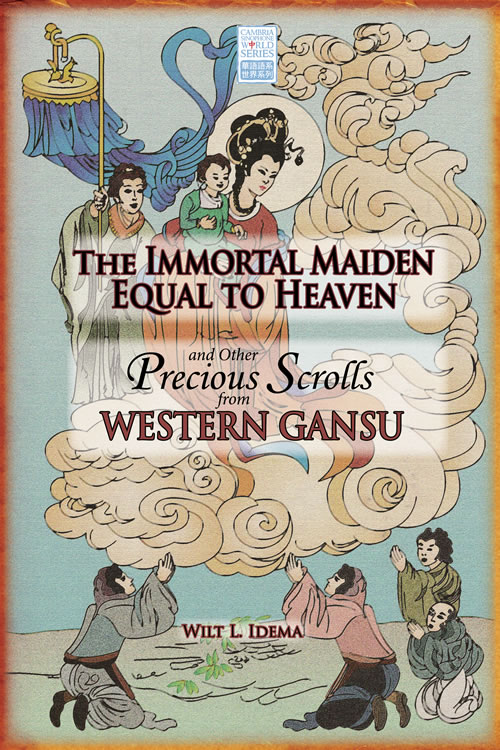 The Immortal Maiden Equal to Heaven and Other Precious Scrolls from Western Gansu by Wilt L. Idema

"This addition to a growing body of premodern popular Chinese literature in translation, much of it also by Idema, is something to be celebrated ... there remains incredible value in making obscure, yet compelling, stories such as these available to non-native Chinese readers." —Journal of Chinese Religions

Following thirty years of suppression as feudal superstition, Chinese popular religion has made a spectacular comeback since the 1980s. One aspect of this phenomenon has been the return of precious scrolls as ritual and entertainment in several regions of China, most notably the economically advanced Wu-dialect area and the poor countryside of Western Gansu. As these texts were performed once again, they have been collected, edited, and published as part of China’s Intangible Cultural Heritage.

These materials greatly broaden and deepen our knowledge of popular literature, ritual, and religion and open a new window into the values and customs of local society. The texts also offer unique insights into the history of the region as seen through the eyes of the local population who had to confront the harsh environment and frequent incursions of nomadic groups.

Given the wealth of knowledge to be gained, it is not surprising that these materials are attracting the growing attention of scholars. The Immortal Maiden Equal to Heaven and Other Precious Scrolls from Western Gansu by eminent Sinologist Wilt Idema is thus a significant foray into the area. This unprecedented book provides complete and annotated translations of six precious scrolls that have never before been translated. An insightful and helpful introduction precedes each translation. The study includes a general survey of the development, origin, context, and popularity of the narrative and concludes with a discussion of available modern editions.

The first text is the Precious Scroll of the Immortal Maiden Equal to Heaven (based on its 1698 edition), the hagiography of a goddess widely venerated in Zhangye. Spanning nineteen chapters, this precious scroll describes not only the mortal life of the deity but also her posthumous miraculous protection of the Chinese community of Western Gansu. The following three other translated texts offer more recent adaptations of popular tales: the first is of Liu Quan who volunteers to travel to the underworld in the hopes of finding his wife; the second is of the filial parrot that buries its deceased mother with the aid of other birds; and the third is of the mouse that accuses the cat of murder with the judge of the underworld. The fifth precious scroll translated deals with the social disruption caused by the great earthquake of 1928 and the famine of the following years. The study concludes with the translation of a sixth precious scroll, which details the wedding scams of the beautiful Hu Yucui.

"This addition to a growing body of premodern popular Chinese literature in translation, much of it also by Idema, is something to be celebrated. Books like these provide a welcome source of variety for those of us who regularly teach undergraduates and hope to broaden our students’ understanding of Chinese literature beyond the highlight reel of the Shijing, Tang poetry, and six great novels of the Ming and Qing. ... there remains incredible value in making obscure, yet compelling, stories such as these available to non-native Chinese readers. Though the price of the hardcover edition is certainly beyond the budgets of most students, it appears that Cambria offers students and libraries digital access to the book at much friendlier rates. Thanks to this, and the inspiring power the Immortal Maiden, I can recommend this collection of translated precious scrolls for anyone interested in adding more popular Chinese literature to courses on religion or culture." —Journal of Chinese Religions

"This comprehensive book brings together a wide range of scholarship on the baojuan genre with an insightful use of sources. The translated texts offer readers a well-rounded look at the themes and content of this prosimetric genre which are creatively presented on the printed page. The text will be very useful in comparisons with other Chinese genres of prosimetrum and texts in other traditions in East Asia, India, Central Asia, and possibly farther afield." —Mark Bender, The Ohio State University

Wilt L. Idema is Professor of Chinese literature at Harvard University and a recipient of the prestigious Special Book Award of China. He holds a PhD from Leiden University. His publications of the last ten years include The Red Brush: Writing Women of Imperial China (with Beata Grant, 2004); Personal Salvation and Filial Piety: Two Precious Scroll Narratives of Guanyin and Her Acolytes (2007); Meng Jiangnü Brings Down the Great Wall: Ten Versions of a Chinese Legend (2008); Heroines of Jiangyong: Chinese Narrative Ballads in Women’s Script (2009); The White Snake and her Son (2009); Judge Bao and the Rule of Law: Eight Ballad-Stories from the Period 1250-1450 (2010); Monks, Bandits, Lovers and Immortals: Eleven Early Chinese Plays (with Stephen H. West, 2010); The Butterfly Lovers: The Legend of Liang Shanbo and Zhu Yingtai (2010); Escape from Blood Pond Hell: The Tales of Mulian and Woman Huang (with Beata Grant, 2011); Battles, Betrayals, and Brotherhood: Early Chinese Plays on the Three Kingdoms (with Stephen H. West, 2012); The Generals of the Yang Family: Four Early Plays (with Stephen H. West, 2013); and The Resurrected Skeleton: From Zhuangzi to Lu Xun (2014).

Chapter 2. The Precious Scroll of the Immortal Maiden Equal to Heaven

Chapter 4. The Precious Scroll of the Parrot

Chapter 5. The Precious Scroll of the Mouse

Chapter 7. The Precious Scroll of the Wedding Scams of Hu Yucui