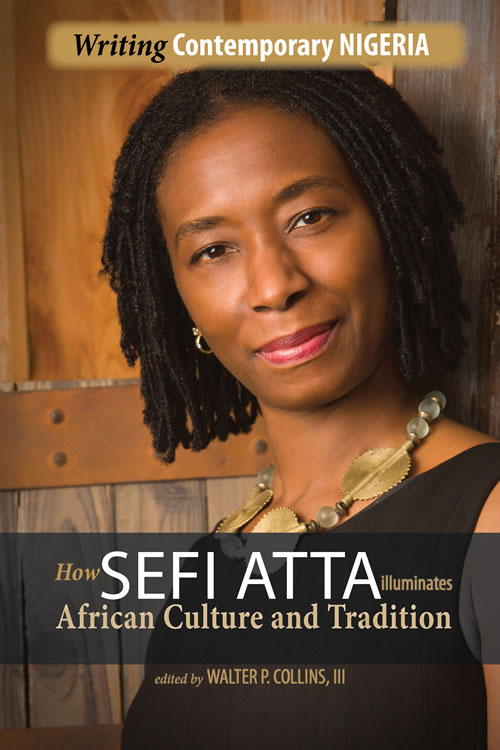 Award-winning writer Sefi Atta’s insights into the roles and treatment of women, neocolonial government structures, patriarchy, 21st-century phenomena such as Nigerian e-mail phishing and the role of geography and place in characters’ lives make her works some of the most indelible offerings across contemporary African fiction. This pioneering premier collection examines Atta’s bold and engaging treatment of various—and often difficult—themes.

This book is in the Cambria African Studies Series headed by Toyin Falola (University of Texas at Austin) with Moses Ochonu (Vanderbilt University).

Sefi Atta has established herself as one of the most engaging writers in the latest wave of Nigerian authors. Living at different times of the year in the United States, England and Nigeria, she remains a committed writer across multiple genres. Atta has published three novels—Everything Good Will Come (2004), Swallow (2010), A bit of difference (2012) and a collection of short stories—News from Home (2010, titled Lawless in Nigeria) Additionally, Atta has written five stage plays—The Engagement (2005), The Cost of Living (2011), Hagel auf Zamfara (2011), The Naming Ceremony (2012), An Ordinary Legacy (2012); four radio plays—The Engagement (2002), Makinwa’s Miracle (2004), A Free Day (2007), The Wake (2012) and a screenplay—Leaving on Your Mind (2009). She is currently completing her next novel which is titled The Bead Collector.

Atta’s works have garnered several literary awards. Her many recognitions and citations include the Red Hen Press Short Story Award in 2003, the PEN International David TK Wong Prize, first place in 2005, the Wole Soyinka Prize for Literature in Africa in 2006, the Noma Award for Publishing in Africa in 2009. Atta’s oeuvre has received the praise and respect of several noted African writers such as Buchi Emecheta, Chimamanda Ngozi Adichie and Helon Habila. In 2004, Atta was honored with a Mississippi Arts Commission Grant to support her work.

Sefi Atta is one of the latest in a great line of female Nigerian writers. She continues to carry the torch borne by women writers like Flora Nwapa, Ifeoma Okoye, and Buchi Emecheta who preceded her. Her work has been published widely on the African continent, in the United Kingdom and in the United States. Her writing focuses on the situations in which Nigerians have found themselves and continue to find themselves and is at once harmoniously poetic and bitingly frank.

Atta is an engaged writer who tackles issues of Nigerian culture and tradition head on. Never shying away, she demonstrates no shame in fore fronting some of the more difficult and shameful aspects of Nigerian cultural practice. Yet, simultaneously, she proves continuously that there are transcendent aspects of Nigerian society as she celebrates them through descriptive and poetic writing. Literary scholars and students alike will benefit from this collection of essays on her multifaceted works.

Atta’s insights into the roles and treatment of women, neocolonial government structures, patriarchy, 21st-century phenomena such as Nigerian e-mail phishing and the role of geography and place in characters’ lives make her works some of the most indelible offerings across contemporary African fiction.

Sefi Atta has been publishing for over a decade, and her works are widely disseminated. Nevertheless, there exists a relative dearth of critical analyses of her works. That Atta writes across the genres perhaps explains some of the lack of literary criticism of her works. This study will facilitate continued examination of Atta’s writings and further dissemination of critique.

In this premiere edited volume on the works of Sefi Atta, Collins has assembled contributors from around the globe who offer critical analyses on each of Atta’s published novels and several of her short stories. The volume is divided into four sections with chapters grouped by thematic connections—Sisterhood, Womanhood and Rites of Passage; The City; Dark Aspects of Atta’s Works; and Atta’s Literature in Application. The book examines Atta’s treatment of these themes while referencing the proficiency of her writing and style. The collection includes an interview with Atta where she offers an insightful and progressive perspective on current language use by Africans.

Chapter 2: Recasting Sisterhood and its Ambiguities

Chapter 6: Images and Voices of Lagos

Chapter 7: The Influence of Lagos on Women

Chapter 11: An Interview with Sefi Atta