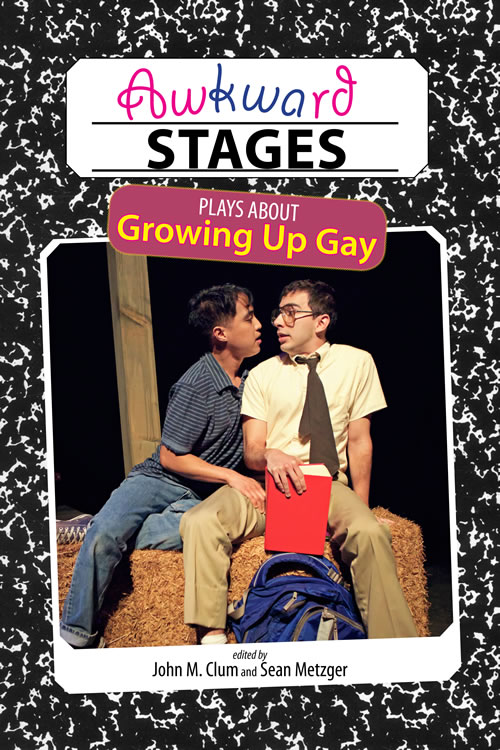 Awkward Stages: Plays about Growing Up Gay by John Clum and Sean Metzger

The plays in this volume, written by some the most celebrated playwrights, illuminate how sexual identity is important to the young men, in great part because they must define themselves against the prejudice and sanctions of family and social institutions. For example, Michael Perlman’s From White Plains shows the power and danger of contemporary media, which has enabled a new, virulent form of bullying.

While gay teenagers have been central characters in dozens of independent American films, they have seldom appeared on stage until recently. One context for the recent widespread production of gay teen plays is the wake of Matthew Shepard’s 1998 murder. The case spawned a media frenzy, generating national headlines as well as debates about hate crime legislation. A surge in government and private funding followed that fed projects and programs addressing anti-lesbian, gay, bisexual, and transgender violence. Continued anti-LGBT violence (e.g., the shooting of 15-year old Larry King in 2008) provides a haunting backdrop for the narratives in this book.

The now-ubiquitous depictions of gay teens in the media have led some scholars to question, despite chilling evidence to the contrary, whether such an identity category will remain relevant. The increasingly mainstream narrative of gay adolescence reinforced by much fiction, film and television has often been one of acting on one’s sexual desires and eventually accepting an identity and embracing a community—gay or queer—despite often brutal resistance from family, religion and peer group. This developmental narrative often contains pathos, but also, ultimately affirmation.

The plays in this volume, written by men (some of whom are the most celebrated playwrights) who were in their late twenties and early thirties, affirm adolescents as subjects active in same-sex relationships. Sexual identity is important to the young men in their plays, in great part because they must define themselves against the prejudice and sanctions of family and social institutions. In some cases, the experiences dramatized in these plays are examples of the “gay pathos.” Some boys, like Benjy in A. Rey Pamatmat’s Edith Can Shoot Things and Hit Them, were severely punished by their parents for expressing their sexuality. Others, like Chris in Daniel Talbott’s Slipping, are terrified of anyone, particularly his peers, discovering his sexual relationship with another boy. Dennis, in Michael Perlman’s From White Plains, has never recovered from the anti-gay bullying he and his best friend endured in high school.

At the same time, most of the plays in this book depict joyful expressions of gayness. Much of Edith Can Shoot Things and Hit Them is the story of two teenage boys discovering sex and love on a remote Midwestern farm despite the interventions of parents. On his twelfth birthday, Ricardo Bracho’s Sissy discovers and celebrates his inner queen. Yet not all adolescents can feel that joy. Eli, in Slipping, connects sex and desire with cruelty, first suffered at the hands of the conflicted lover Chris, then projected onto the sweet boy with whom he becomes involved in Iowa, and finally inflicted upon himself.

The young men in these plays are all unique characters. Affirmation of their sexuality in a time and places where homophobia is still a reality is only one problem each faces. Like many works about adolescence, these plays depict the blurry no man’s land between childhood and adulthood. Loss has been a part of their experience. In Slipping, after his father’s death, Eli must move with his professor mother from California to Iowa. Preoccupied with her new job and new boyfriend, she articulates little concern for her son’s grief and confusion. Dennis in From White Plains has never recovered from the loss of his high school best friend. In Edith Can Shoot Things and Hit Them, Kenneth and his twelve-year-old sister have been deserted by their father after their mother’s death. At sixteen, Kenneth must take on the responsibilities of the head of the household, yet is keenly aware that he is not yet an adult. Kenneth screams at his usually absent father, “You aren’t a parent. You’re an interruption.” That could be said of almost all the adults in these plays, whether parents, teachers or other supposedly well-meaning grown-ups. In From White Plains, Gregory may be thirty, but he is still afraid of his parents’ rejection. Nor are peers much help.

Each of the playwrights represented in this volume has a particular take on gay adolescence. Each also has a unique theatrical style, from the musical and linguistic exuberance of Ricardo Bracho’s Sissy to the alternation of three moments in time in Daniel Talbott’s Slipping. Michael Perlman’s From White Plains shows the power and danger of contemporary media, which has enabled a new, virulent form of bullying.

More than forty scripts were considered for this book; the purpose of which is to offer as much diversity as possible in terms of both content and theatrical styles. All of these plays have received powerful productions at theatres across America and demonstrate the vitality and variety of contemporary American drama. This is an important book for all collections not only in LGBT studies and theater studies, but also education and sociology because of how it deals with adolescent homosexuality and homophobia, as well as bullying.

John Clum is Professor Emeritus of Theater Studies and English at Duke University where he taught for over forty years. He founded the Duke University Drama Program, which has become the Department of Theater Studies. He was the Director of the Duke in London Drama Program and also ran London theater programs for the Graduate Program in Liberal Studies and the Alumni Association. Professor Clum won Duke’s Outstanding Professor Award twice. Professor Clum's books include The Works of Arthur Laurents, Gay Drama Now, Still Acting Gay: Male Homosexuality in Modern Drama, Something for the Boys: Musical Theatre and Gay Culture, He’s All Man: Learning Masculinity, Homosexuality and Love from American Movies and, most recently, The Drama of Marriage: Gay Playwrights/Straight Unions from Oscar Wilde to the Present. He is the author of numerous essays on modern and contemporary British and American drama and musical theatre. His plays have been produced by a number of theatres around the United States and he has directed over seventy-five theatrical and operatic productions.

Sean Metzger is an associate professor at the UCLA School of Theater, Film and Television. Prior to his arrival at the UCLA School of Theater, Film and Television, Professor Metzger was Assistant Professor of English, Theater Studies, and Asian & Middle Eastern Studies at Duke University. He was awarded the inaugural Fulbright Research Chair in North American Society and Culture at Concordia University (Montreal) and has also been adjunct faculty at Antioch University, Loyola Marymount University and the USC School of Theatre. In addition to his academic work, he spent three years in social services at the L.A. Gay & Lesbian Center and as an independent consultant to school districts and other non-profit institutions.

Chapter 1. EDITH CAN SHOOT THINGS AND HIT THEM by A. Rey Pamatmat