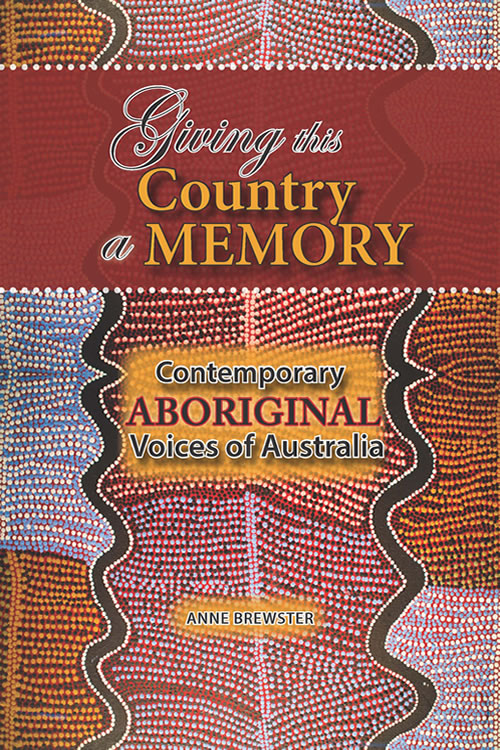 Giving this Country a Memory: Contemporary Aboriginal Voices of Australia by Anne Brewster

"Strikes a fine balance between the distancing effect of a scholarly approach and the respect and engagement owed to the Indigenous community ... Brewster’s well-pitched, necessary and timely initiative stands as an indispensable piece of engaged scholarship." — Journal of the European Association for Studies of Australia

This collection is a collaborative cross-racial project that brings Anne Brewster, a white scholar of Aboriginal literature, into conversation with Aboriginal writers about a range of issues that arise directly from their work. Brewster explores the various contexts in which these writers write and in which non-Aboriginal readers read Aboriginal literature. The interviews are accompanied by a survey essay (by Brewster) on each writer’s work which aims to introduce readers to the main themes and issues of each writer.

The book represents a range of writers. It includes highly acclaimed writers whose works are widely recognised (Kim Scott, Doris Pilkington Garimara, Melissa Lucashenko) and other writers whose works are on the ascendancy (Romaine Moreton and Jeanine Leane). Leane and Moreton have attracted some scholarly attention - for example by being set on educational syllabi and having scholarly work published on it – and their reputation continues to grow nationally and internationally. The book includes interviews with a number of emerging writers whose work is powerful and compelling but has not yet been taken up widely either because it is new (Marie Munkara) or because there has been a lack of confidence on the part of readers in taking up authors outside the present canon (Alf Taylor).

The interviews make a unique contribution to the understanding of Aboriginal literature and of how these writers developed as writers. While many Aboriginal writers write in part for their own communities, they have expressed their strong desire that their work circulate widely among non-indigenous audiences. This book will facilitate the dissemination of Aboriginal literature and will make use of the valuable literary and cultural resources of the writers themselves in order to enrich and expand the understanding of that literature.

In these interviews the writers talk about the development of Australian indigenous literature and the conditions which have given rise to their writing. They talk about their childhoods, family histories and the regions in which they have lived. They talk about their education and the books they have read; about the importance of humour, the reasons for their choice of a particular genre and what aesthetic and cultural work they see it as undertaking. They talk about how they conceive of their audiences and issues pertaining to cross-racial scholarship. These are all issues which allow readers to understand their work better. This understanding is further enhanced by the survey essays on each writer’s work.

Aboriginal literature is a growing field with a rapidly expanding global audience. Unfortunately many students and scholars read only the most recognised and acclaimed writers and betray some hesitation in approaching newer authors. While this book represents three widely recognised writers, it widens the canon of Aboriginal literature by introducing readers to four lesser-known but equally important writers.

Non-indigenous readers are sometimes unsure about the ethics of cross-racial reading and research - how to approach Aboriginal literature, how to read it, teach it and write about it. By providing rare and valuable insight into the writers’ creative process, into the ways in which they conceive of their audiences and readerships, and into their aspirations for cross-racial understanding, the interviews clarify uncertainties and provide direction for non-Aboriginal readers. They contribute to widespread discussions about the ethics of cross-racial reading, research and scholarship. They provide a timely addition to cultural debates within the public sphere beyond the academy and enable us to better comprehend the turbulent times in which we live.

This book serves to broaden and deepen current scholarship on the literary works but also to introduce readers to writers they might not have read before. They are both accessible and scholarly. The book also fills a gap by focusing areas of that has been neglected. For example while Lucashenko’s novel Steam Pigs has attracted a lot of critical attention, her second adult novel Hard Yards remains largely unnoticed, a situation this book aims to correct.

Giving this Country a Memory is an important book for all literature and Australasian collections and well as those of global Indigenous literature.

"A respectful, very accessible and timely overview of Indigenous Australian writing ... . Brewster’s adroit and engaged analysis of the novels, short stories, and poetry—the way these can be contextualized and understood within the mainstream pressures exerted upon the Aboriginal communities and the continuing fight for Indigenous sovereignty—never frames or takes over from, but rather adds on to, the Indigenous author’s voice which precedes the analysis. ...the collection strikes a fine balance between the distancing effect of a scholarly approach and the respect and engagement owed to the Indigenous community. ... Brewster’s well-pitched, necessary and timely initiative stands as an indispensable piece of engaged scholarship from a mainstream speaking position that contributes significantly to what Martin Nakata has called the “cultural interface” (198) between Indigenous and non-Indigenous Australians."-The Journal of the European Association for Studies of Australia

"This is a scholarly work, and some of Brewster’s reflections are rather densely written, but her interviews are nimble and the resulting conversations are a joy to read: by turns humorous and heart-wrenching, and always thoughtful, incisive and generous." – Overland

“This is a powerful interrogation of some of the most important and potent Indigenous voices in contemporary Australian literature. It provides a framework through which to more deeply engage with the significant work, ideas and insights of a new generation of Indigenous writers.” – Larissa Behrendt, Professor of Law, University of Technology Sydney

“With a long-standing commitment to Aboriginal writing Anne Brewster is ideally placed to present this book of collected interviews of some of the most important Aboriginal writers of recent years. I was both surprised and pleased at the rich diversity of the authors included, and Brewster's sensitive and attentive interviewing mode and commentary. The interviews combined with Brewster's illuminating essays, on each of the authors, make this an essential resource for anyone with more than a passing interest in Aboriginal writing and Australian literature.” – Philip Morrissey, Head of Australian Indigenous Studies, University of Melbourne

“Anne Brewster’s interviews offer a groundbreaking insight into the complex world of Aboriginal writing. By deftly traversing the relation between the authors’ texts and the reader’s relation to them she offers the writers an avenue through which they may elaborate both the depth of Aboriginal cultures and their fraught relation with settler society. These are valuable for anyone interested in Aboriginal writing.” – Bill Ashcroft, Australian Professorial Fellow, University of New South Wales

“Literary critics often forget to ask the authors what they think. Here, Anne Brewster talks to some celebrated Indigenous Australian writers about their unique contexts, their struggles and their craft. It is an invaluable resource for both the general public and students of these works.” – Stephen Muecke, Professor of Ethnography, University of New South Wales

Anne Brewster is an associate professor at the University of New South Wales. Her previous publications include Literary Formations: Postcoloniality, Nationalism, Globalism and Aboriginal Women's Autobiography. She coedited, with Angeline O’Neill and Rosemary van den Berg, an anthology of indigenous writing, Those Who Remain Will Always Remember.