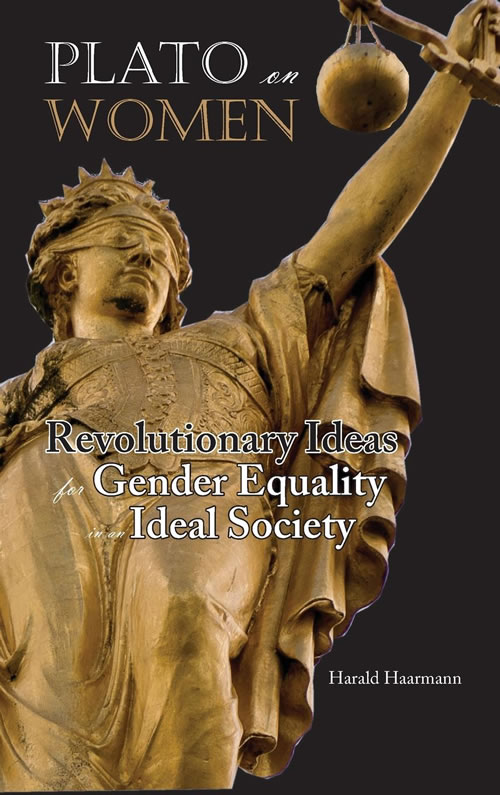 Plato on Women: Revolutionary Ideas for Gender Equality in an Ideal Society by Harald Haarmann

What has been produced up to the present regarding Plato's positions on the agenda of gender are disparate studies whose scope falls short of the whole range of angles from which Plato himself approached the issues, and the study of gender issues in Plato has remained unsystematic so far. In this book, Harald Haarmann provides the first systematic analysis of Plato's positions on gender and the role of women in an ideal society.

Plato (ca. 427– ca. 347 BCE), the preeminent Greek philosopher, has been extensively studied. A major field of Plato’s comprehensive work is his political philosophy, which is multifaceted and multidimensional. The discourse on gender issues forms an integral part of it. In this context, one is surprised to notice that Plato’s elaborations have been interpreted in quite contrasting ways. In some feminist discussions of classical philosophy, Plato’s intellectual enterprise is evaluated as reflecting Greek male chauvinism. Such identification carries all manner of stereotyping, and this is neither enlightening nor helpful for an overall understanding of Plato’s teachings and his world of ideas. In the scholarly literature, one can make the surprising discovery that Plato’s contribution to the understanding of gender roles in society slips the attention of authors who specialize in this topic.

Plato was neither feminist in the modern sense nor a sexist. Plato was not a liberal thinker, and he did not take the initiative to make a case for women’s liberties. And yet, he elaborates amply on issues of what is subsumed under women’s liberation in our time: What else would we call a philosopher who, under the conditions of Greek society in the classical age, advocated for the participation of women in sports competitions and approved of the access of women to public offices, even to political leadership? In this study, priority lies in reconstructing Plato’s ideas on women’s roles viewed against the zeitgeist of gender issues in Greek society of classical antiquity. The analysis shows that Plato’s speculations about gender and gender issues in an ideal society were nothing short of revolutionary.

What has been produced up to the present regarding Plato's positions on the agenda of gender are disparate studies whose scope falls short of the whole range of angles from which Plato himself approached the issues, and the study of gender issues in Plato has remained unsystematic so far. In this book Plato on Women, Harald Haarmann provides the first systematic analysis of Plato's positions on gender and the role of women in an ideal society. The intention is to achieve a balance in the investigation of Plato's dialogues and to fill gaps by highlighting those texts that have remained understudied, Plato's last dialogue Nomoi ("Laws") in particular. This text, the longest of Plato's dialogues, is now considered, together with the Politeia ("Republic"), to range among the most important sources of Plato's political theory. The introduction of the Laws, which make up about one fifth of Plato's work, into the comparative study of Plato's philosophical enterprise does not only contribute to an enrichment of the whole text corpus but also provides the possibility to broaden the perspective on particular topics, women's roles in society, for one.

The ways in which Plato elaborates on women's roles illustrates that, in light of his concept of true justice, gender issues become detached from the contemporary cliché of "natural law" by which women's status in society was allegedly determined. In this book, a new approach to Plato's philosophical endeavor is presented, one which calls upon an internal reconstruction of historical realities and of cultural conditions during Plato's lifetime, and of its zeitgeist, at the same time avoiding judgmental stereotyping and the forceful projection of modern biased positions into antiquity. Here, Plato's mature reflections on gender equality in an ideal society are contrasted with the real mirror image of women's role in Greek society of the fifth and fourth centuries BCE. The present reconstruction is intended as a contribution, on the one hand, to identify the cultural embedding of Plato's enterprise and, on the other hand, to specify the typical markers of Platonic philosophy. Readers may discover a "new" Plato.

Plato on Women is a major contribution to political philosophy and gender studies as well as an important book for collections of Plato's works and scholarly literature focusing on this philosopher.

Harald Haarmann, PhD, is a German linguist and cultural scientist. He has taught and conducted research at a number of German and Japanese universities. Since 2003 he has been vice president of the Institute of Archaeomythology and director of its European Branch. Dr. Haarmann is the author of more than fifty books in German, English, Spanish, Hungarian, Japanese, Chinese, Korean, and other languages, among them three world histories (of writing, languages, and numbers). His fields of study are cultural history, ancient civilizations, archaeomythology, history of religion, writing history, language evolution, and research on identity. For his work, he received the Prix logos awarded by the Association européenne des linguistes et des professeurs de langues (Paris) and the Premio Jean Monnet for essay writing.

Chapter 3: Plato’s Vision of Women in an Ideal Society

Epilogue: Reflections on Plato’s Political Theory and Gender Positions in the Mirror of a Changing Zeitgeist