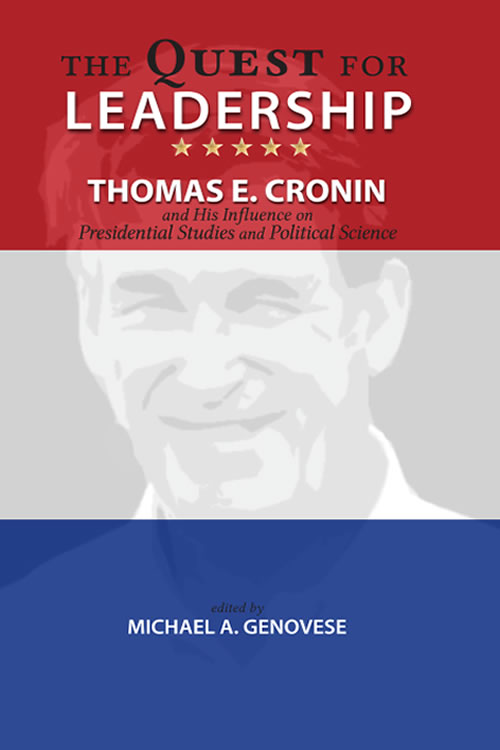 The Quest for Leadership: Thomas E. Cronin and His Influence on Presidential Studies and Political Science by Michael A. Genovese

The book evaluates the leadership successes and failures of US presidents on a wide range of issues, from education policy, social security reform, health care, and the surveillance of Americans to the tending of coalitions. It also analyzes presidents as war-time leaders, reviews America's standing as a world leader, and reflects on American nationalism during World War II.

This book is in the Cambria Politics, Institutions, and Public Policy in America (PIPPA) Series (General Editors: Scott A. Frisch and Sean Q. Kelly).

It is unusual to become a Mount Rushmore scholar in any one particular field, but Thomas E. Cronin has made that tremendous accomplishment in two different academic fields--he is one of the most respected presidency scholars in the nation, and he is one of the most influential leadership scholars. In this book inspired by Cronin's outstanding scholarship, some of the top scholars in the nation apply their craft to sorting out the state of leadership in their respective areas of expertise.

This edited volume evaluates the leadership successes and failures of US presidents, such as George W. Bush and Barack Obama, on a wide range of issues, from education policy, social security reform, health care, and the surveillance of Americans to the tending of coalitions. It also analyzes presidents as war-time leaders, public leadership, and the state of presidential leadership and authority. The book reviews America's standing as a world leader and reflects on American nationalism during World War II. Leadership in the judicial context, specifically chief justices, is also examined.

Written in a highly accessible manner, this book will be of interest not only to scholars and practitioners but also to students and general readers who wish to learn more about leadership.

Read chapter excerpts from The Quest for Leadership.

The Launch of The Quest for Leadership at APSA.

Michael A. Genovese holds the Loyola Chair of Leadership Studies, and he is Professor of Political Science, Director of the Institute for Leadership Studies, and acting President of the World Policy Institute at Loyola Marymount University. He has written more than forty books, including Leadership Matters, (with Thomas E. Cronin; Paradigm) which was named Outstanding Leadership Book of the Year by the International Leadership Association, and Corruption and American Politics (coedited with Victoria Farrar-Myers; Cambria Press). Dr. Genovese has won over a dozen university and national teaching awards, including the Fritz B. Burns Distinguished Teaching Award and the Rains Excellence in Research Award, and he frequently appears as a commentator on local and national television.

Chapter 2: Leadership and the Tending of Coalitions (Bruce Miroff)

Chapter 4: Reflections on the State of Presidential Leadership and Authority (Victoria A. Farrar-Myers)

Chapter 6: Presidents Bush and Obama and the Surveillance of Americans (James P. Pfiffner)

Chapter 11: I Am an American Day (David Schmitz)