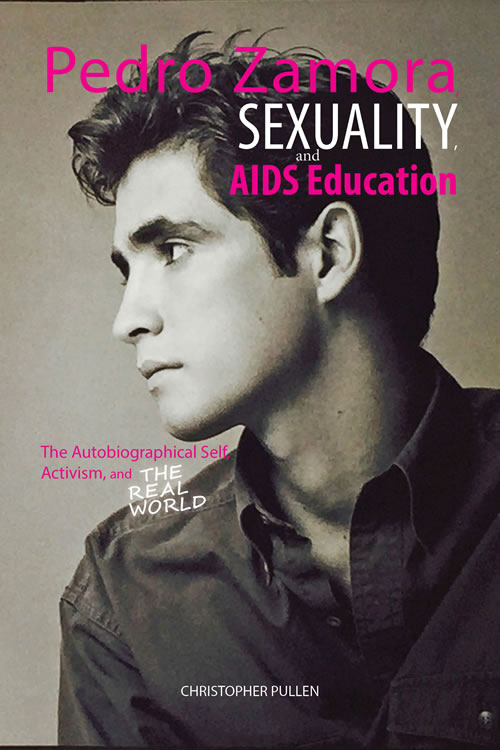 Pedro Zamora, Sexuality, and AIDS Education: The Autobiographical Self, Activism, and The Real World by Christopher Pullen

This book illuminates the significance of the work of Pedro Zamora and places in context contemporary needs for both HIV/AIDS education and the personal political context of sexual diversity. It is a must read for those in LGBT studies, communications, social work, and the performing arts.

Pedro Zamora was an openly gay AIDS activist of Cuban descent, who became a worldwide media phenomenon, particularly after his participation in The Real World television documentary series, set in San Francisco in 1994, where he openly represented his life as a person living with AIDS.

Although Zamora passed away the same year he was on The Real World at only twenty-two years old, his life story continues to be an important contribution to contemporary debates on AIDS education, given how he was such an icon for sexual diversity.

Offering a comprehensive biographical narrative which brings together a wide range of media sources, including not only close examination of The Real World television series itself, the biographical film Pedro, educational documentaries to which Zamora contributed, and news reports from The Miami Herald, The Wall Street Journal, and POZ Magazine, key elements of Zamora’s story are brought together for the first time. This frames the significance of the Zamora family and sheds light on Zamora’s political strategy and ideology.

This study also explores the work of other AIDS activists and educational processes, offering a theoretical foundation framing the notion of the “autobiographical self,” as a process in which individuals use their personal stories relative to activism and the politics of identity. This includes analysis of the work of Suzi Lovegrove (1955–1987), Ryan White (1971–1990), Vito Russo (1946–1990), Paul Monette (1945–1995), Marlon Riggs (1957–1994), and Xoliswa Sitole .

Through the examination of these case studies in relation to Zamora’s work, key critical themes emerge within the book. These include the significance of the “mutable self” as a contemporary way of presenting personal identity that allows the individual to reveal vulnerability but also express strength in self-awareness and the ability to connect to audiences; the significance of finitude or mortality within AIDS narratives as well as the context of war or conflict as a cultural point of identification; the personal context of the postcolonial autobiographer and their ability to reveal tensions between the borderlines of cultural difference; the connection that may be made between the philosophies of educational theorist Carl Rogers and the ideas of Pedro Zamora; the notion of the shared autobiographical project, evident in the significance of working with peers; and the propensity for the autobiographer to relate the life story of the mother, in providing a sense of union.

This book illuminates the significance of the work of Pedro Zamora and places in context contemporary needs for both HIV/AIDS education and the personal political context of sexual diversity.

The book includes 23 images. It is a must read for those in LGBT studies, communications, social work, and the performing arts.

“Christopher Pullen gives Pedro Zamora’s extraordinary life compelling form in this illuminating account. He urges to rethink our notions of self and identity. Our lives depend on them, and this book makes clear how very true that is.” —Bill Nichols, author of Introduction to Documentary (Indiana University Press)

"Documenting gay Cuban American activist Pedro Zamora's appearances onscreen, in person, and in print, Pedro Zamora, Sexuality, and AIDS Education reflects on the power of mediated autobiography and testifies to the ongoing importance of working together to combat HIV/AIDS and injustice. Informed by the assessments of 1980s and 1990s AIDs activism offered by Alex Juhasz, José Esteban Muñoz, Simon Watney, Roger Hallas, Randy Shilts, Paul Monette, Marlon Riggs, and others, Pullen's study details how the good-looking Zamora became a skilled educator who excelled at reaching out to youth, especially queer youth, and people of color. Diagnosed as HIV-positive at the age of seventeen, Zamora learned how to be charismatically convincing, conjoining vulnerability, transparency, sincerity, warmth and strength. His articulately "out" role on MTV's 1994 reality show, The Real World: San Francisco, was a highlight; sadly, he died that same year, aged only twenty-two. Kudos to Pullen for so eloquently marshaling Pedro Zamora's life, work, and love, for the present, toward the future." —Chris Holmlund, Arts and Sciences Excellence Professor of Cinema Studies, Women's Studies and French, University of Tennessee; and author of Impossible Bodies

Christopher Pullen is Senior Lecturer in Media Theory at Bournemouth University. Dr. Pullen is the author of a number of books focusing on sexuality and the media. His recent books include Straight Girls and Queer Guys: The Hetero Media Gaze in Film and Television, Gay Identity, New Storytelling and the Media, and Documenting Gay Men: Identity and Performance in Reality Television and Documentary Film, and the edited collections Queer Youth and Media Cultures, LGBT Transnational Identity and the Media, LGBT Identity and Online New Media, and Queer Love in Television and Film.

Chapter 1: The Narrative of Pedro Zamora

Chapter 2: The Autobiographical Self

Chapter 4: Postcolonial and Autobiographical Self