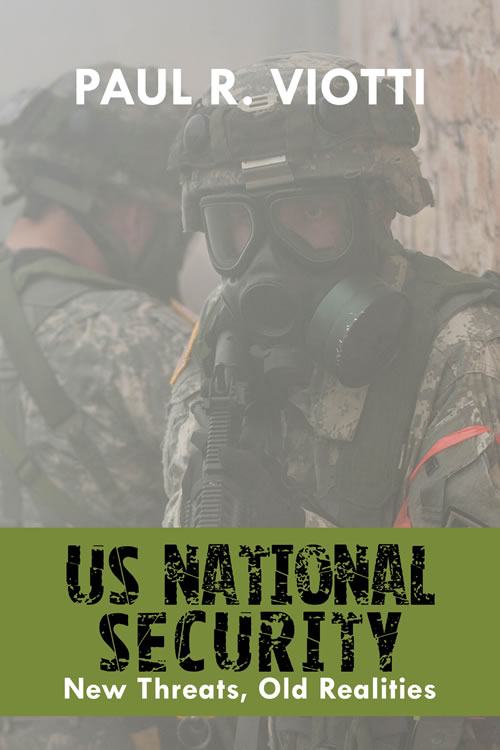 Taking into account the threats and opportunities we face today, Paul Viotti identifies a number of strategies and policies for the U.S. that are central to the maintaining of peace and security over the next few decades. This is an is an important volume for all collections focused on the making and implementation of both foreign and national security policy.

We live in a world in which events and actors not conceived of as posing an imminent danger during most of the twentieth century are now directly threatening human security. Critical infrastructures —from electric power grids to nuclear power plants, from water distribution systems to banks and air traffic control systems—are vulnerable to cyber attacks by state and non-state actors. Climate change threatens to disrupt people’s lives and livelihoods, escalating disputes over access to key resources. Global inequality of income and wealth is undermining living conditions, especially in densely populated parts of the world that are often breeding grounds for the viruses that precipitate pandemics. Telecommunications and transportation are creating fertile ground for transnational criminal networks that engage in illegal arms transfers, drug trade, prostitution, slave trade, and other illicit activities. Beyond these human security concerns is the ongoing challenge of proliferation of weapons of mass destruction to other states and terrorists—and the previously unthinkable specter of the weaponization of space.

In addition to these and other “new threats” are the “old realities” of state and non-state actors interacting in a still anarchic world that lacks any central authority over that exercised by sovereign states. In this increasingly globalized world, we still face inter-state wars and armed interventions, inter-communal strife that spills over national borders, and insurgencies or other movements and groups that resort to terrorism or other forms of political violence.

US National Security: New Threats, Old Realities addresses these threats, and the reciprocal use of force they engender, through a constructivist lens: one that assumes the ideas in the heads of policy makers, and their particular interpretations of “facts,” to be part of a highly subjective process. After analyzing and explaining the key threats and the vehicles in which they become manifest— war, armed intervention, insurgency, countering insurgency and terrorism, and intelligence—the book examines the projection of force and elements of force maximization, in chapters on civil-military relations, a diverse military of citizen volunteers, and organization and budget. And it traces how the role of the US dollar, as a globally accepted currency, gives a particular advantage to US business and banking interests, and to the US government, when it comes to financing the costs of global diplomatic, military, and other operations.

Taking into account these threats and opportunities, Paul Viotti identifies a number of strategies and policies for the US that are central to the maintaining of peace and security over the next few decades. Key amongst these is the forging and maintaining of relations with other great powers and the developing and reinforcing of cooperative norms and institutions among these and other states. Alongside this is the need for the distribution of the typically asymmetric gains that stem from such cooperation. However, he cautions that these strategies can be enacted only if great powers exhibit the enlightened self interest necessary for them to attend to the demands of states that lack the capital or other resources that are core to their relative power positions.

In conclusion, he posits that successful management of inter-state relations by the US and other great powers will require a careful and adept application of a “reconstructed” realism that emphasizes the ways and means of cooperative security.

US National Security: New Threats, Old Realities is an important volume for all collections focused on the making and implementation of both foreign and national security policy.

“By expanding the notion of national security beyond long-standing issues of interstate warfare, to include emerging challenges such as criminal networks, cyber threats, and space warfare, Paul Viotti’s new book is an important addition to the national security debate. His discussion of the contentious issues of civil-military relations—grounded on the Founders’ understanding of civilian supremacy, and how the military should be integrated into civilian society—is masterful.” —John Allen Williams, Professor of Political Science, Loyola University Chicago

"Paul Viotti magnificently blends comparative concepts of security with realistic analyses of cooperation in challenging contexts. His persuasive and balanced argument highlights the subjectivity of decision-making, and is backed by exceptional scholarship and practical experience. By framing critical policy choices in terms of socially constructed threats, he makes the case for integrating technology and the use of force with broader considerations of power and influence." —Colonel Thomas A. Drohan, USAF, Head, Department of Military & Strategic Studies, the United States Air Force Academy

"Paul Viotti brings a wealth of knowledge and keen insight to this engaging survey of U.S. security policy. He reminds us, importantly, that our policies emanate from ideas grounded in interests, and that both are socially constructed. In a period of change affecting threats, strategies, and institutions, U.S. National Security is an essential guide."—Robert E. Williams, Jr., Professor of Political Science, Pepperdine University

Paul R. Viotti is Executive Director of the Institute on Globalization and Security, University of Denver, where he is also a professor in the Josef Korbel School of International Studies. Professor Viotti holds a PhD in Political Science from the University of California, Berkeley, an MS from The George Washington University, an MA from Georgetown University, and a BS from the US Air Force Academy. His previous publications include The Dollar and National Security, American Foreign Policy, five editions of International Relations Theory, five editions of International Relations and World Politics, and three editions of The Defense Policies of Nations. He has served as President (1993–2003) and Vice Chair of the Board (2003–2016) for the Denver Council on Foreign Relations.