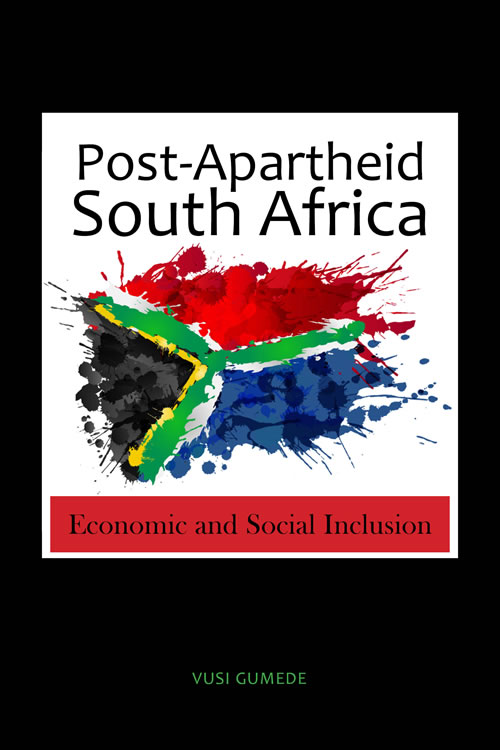 "This is a highly recommended text for anyone who is concerned about Africa and not just South Africa alone." —Thandika Mkandawire, former Director of the United Nations Research Institute for Social Development and Chair in African Development at the London School of Economics (LSE)

This book is in the Cambria African Studies Series by Toyin Falola (University of Texas at Austin) and Moses Ochonu (Vanderbilt University).

South Africa held its first democratic elections in 1994, after about 350 years of minority governments. Nelson Mandela became the first President of a democratic or post-apartheid South Africa. The successive administrations since 1994 have pursued many programs, policies, legislative instruments and other initiatives to correct the imbalances that the apartheid system created. In particular, the focus, since 1994, has been on social and economic inclusion. Inclusive development is important for any democratic government emerging out of the past that was undemocratic and discriminatory. Redress becomes a hallmark of all that a democratic government pursues. The early years of a democratic or post-apartheid South Africa focused on national reconciliation. The second President, Thabo Mbeki, focused more on the economy – a project he started when he was the first Deputy President in the Mandela administration. The third President of the democratic South Africa, Jacob Zuma, has continued with the project towards an inclusive society.

In about twenty years since the dawn of democracy in South Africa the debates about the performance of the society under the leadership of the African National Congress (ANC) has gained momentum. The ANC came up with many discussion documents aimed at informing policy and or ideological orientation of the state. In its national Congresses and General Councils meetings as well as in Makgotla, the ANC discusses and develops policies and frameworks which are to influence the work of the government. The analysis of the policies pursued since 1994, especially as far as inclusive development is concerned, is critical and it is the main preoccupation of this book. In addition, the book also examines the effects and implications of the policies implemented since 1994, in the context of whether South Africa is becoming or not becoming a society that was envisaged by the liberation project; an inclusive and prosperous nation.

South Africa is a complex society in many respects. Many of intractable dilemmas confronting South Africa are a result of the legacy of apartheid. Apartheid created a skewed distribution of resources and opportunities. It is therefore not surprising that many challenges that the successive democratic administrations have had to deal with are structural; the structure of the economy make it more challenging to reduce poverty and inequality as well as to create jobs for the majority of South Africans. The book analyses the ramifications of the apartheid system – examining the totality of apartheid colonialism – in relation to the post-apartheid development experience within the context of the global distribution of power.

The fundamental challenge that constrains South Africa’s ability to further achieve inclusive growth and development relates to policy. Therefore, economic policy has to address the challenges of unemployment and poverty, as well as reducing inequality. Social policy has to be robust. Labor market policies should be ameliorated. More importantly, social and economic policies have to work together for socioeconomic development. To achieve this, South Africa needs a ‘new’ consensus on the ideal framework or approach to its socioeconomic development. Over and above policy and or policy reforms, implementation should be improved. In addition, and perhaps more importantly, South Africa needs to reconfigure state-capital relations. Lastly, it should be more meaningful and relevant – in the context of democratic South Africa – to see a nation as a community that acknowledges and respects its repulsive political and economic history of deprivation through systematic restitution, reconciliation, and restructuring measures, and, more importantly, equitable sharing of resources.

This is an important book for collections in African studies and international politics.

"The book is a retrospective analysis of the first two decades of public policy making in post-apartheid South Africa. Its main argument is that the post-independent South African state, through its policies, is failing to uplift the lives of the poor to an acceptable level of humanity. This argument is backed by thorough research that draws on a detailed historical narrative on the political economy of South Africa. The author draws parallels between the post-apartheid and apartheid dispensations’ developmental route and he concludes that that they both colluded with global capital to the detriment of the poor. The book is thematically organized in a manner that permits a comprehensive examination of inclusive development in South Africa since 1994. Its innovation is privileging an Africanist perspective and dealing with the racial inequalities that continue to haunt South Africa while also acknowledging the widely published class analysis of the post-apartheid state. The author’s previous experience as a government bureaucrat offers a rare and unique insider perspective which makes the book stand out. The book raises pertinent issues such as the delicate relationship within the Tripartite Alliance that, in the author’s view, impede some of the policy moves that the ANC could have pursued; the violent nature of the post-apartheid state that collude with corporate South Africa to unleash violence on the poor (Marikana massacre is cited as one case in point), the inability to forge a nation despite the progressive Constitution, the ruling class’s failure to prioritise the poor in policies, and what the author calls inappropriate theorisation with regard to the conditions and challenges facing South Africa. These are just some of the arguments the author advances in the book and are neatly supported by evidence. This is a highly recommended text for anyone who is concerned about Africa and not just South Africa alone." —Thandika Mkandawire, former Director of the United Nations Research Institute for Social Development and Chair in African Development at the London School of Economics (LSE)

"The book is an important contribution to the debates about the future of South Africa, distilling from the first two decades of democracy, particularly from the perspective of developmental state. To what extent have successive post-apartheid administrations in South Africa lived up to the ideal of wanting to be a developmental state in terms of policy conceptualization and formulation and, importantly, with regard to implementation capacity? The book sets out to answer this question and other relevant questions. I recommend the book not only to academics, researchers and students, but also to policy-makers in both the public and private sectors." —Joel Netshitenzhe, Executive Director of the Mapungubwe Institute for Strategic Reflection (MISTRA)

Vusi Gumede is a Professor at the University of South Africa and Director of the Thabo Mbeki African Leadership Institute. Previously, he was an associate professor at the University of Johannesburg. Among other lecturing jobs, he lectured public policy during 2009 2014 at the erstwhile Graduate School of Public and Development Management of the University of Witwatersrand in South Africa. He worked for the South African government in various capacities for about 12 years – he was chief policy analyst, among other things, in The Presidency. Before that, he was a researcher at the National Institute for Economic Policy – he also taught economics at the University of Durban-Westville where he obtained his Masters of Commerce in Economics. He is affiliated with numerous institutions as board or committee member or a fellow. He has also been, among other things, a Distinguished Africanist Scholar with the Institute for African Development at Cornell University and a Yale World Fellow with Yale University, among other fellowships and/or visiting scholarships. He holds postgraduate qualifications in economics and policy studies, including a PhD in economics, obtained in 2003 at the University of KwaZulu-Natal. He is the author of Political Economy of Post-Apartheid South Africa (CODESRIA Press), coeditor of Unite or Perish: Africa Fifty Years After the Founding of the OAU and of Regenerating Africa to Bring African Solutions to African Problems (AISA Press), and he has been guest editor of special issues of Africa Development and Africa Insight, and he has authored numerous journal articles, book chapters and essays. He has also written and co-written numerous research reports, edited and co-edited collections of essays and is a member of various editorial boards of journals.