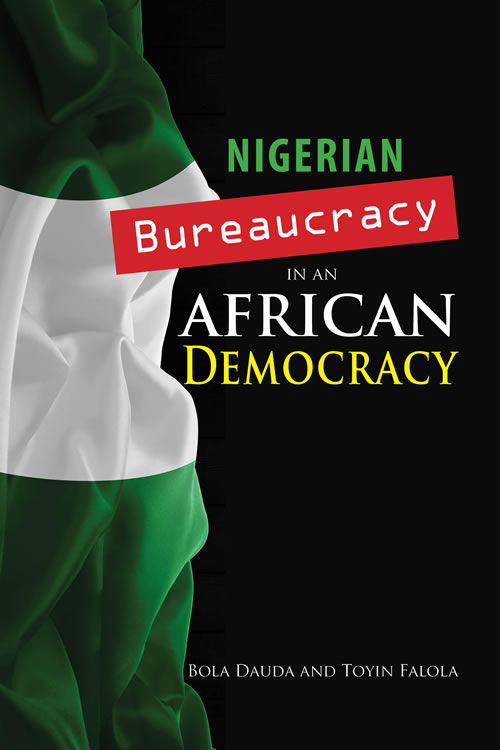 This interdisciplinary and comparative study examines the Nigerian political system as a template for a historical and contemporary global comparative review and understanding of democracy-bureaucracy relations.

Although Nigeria adopted the American presidential system in 1979, bureaucracy-democracy relations continue to be shrouded with seven fundamental historical issues that are unique to Nigeria. These issues are its colonial heritage, the prevalent diarchy of the civil and the military bureaucracies for more than half of the 50 years of Nigerian independence, the inherited British Westminster parliamentary traditional dichotomy between politics and administration, the inherent powerful nature of bureaucracy, the threat to Nigerian nationhood, intractable challenge of the Nigerian multiethnic nationalities competing for resources, and the double-edged sword of bureaucracy .

In any attempt to understand the complexity of bureaucracy-democracy relations, three things need to be kept in mind. First, there is a misconception that the Nigerian bureaucracy is too powerful for democracy. Second, there is a misunderstanding of the instrumental role of bureaucracy for governance. By political and economic standards, Nigeria is a weak state. Its political stability is often threatened by the centrifugal forces of ethnicity, religion, class, gender, and North-South power relations. However, there is no amount of administrative competence and organizational capability that can remedy political errors, although innocent public administrators will be blamed and will be expected miraculously to produce good out of bad, and success out of unavoidable failure. Bureaucracy cannot substitute for systemic political or institutional socioeconomic cultural and structural public policy defects. Third, political and economic institutions of government can rarely succeed without an appropriate bureaucracy. Therefore, political leaders must demand better administrative performance, constantly monitor that honest attempts are being made to meet their wishes, and exercise effective sanctions when necessary.

This interdisciplinary and comparative study examines the Nigerian political system as a template for a historical and contemporary global comparative review and understanding of democracy-bureaucracy relations.

Bola Dauda is an eminent public administrator and scholar. He served as the undersecretary and revenue budget officer for Ogun State and he represented the State and Federal governments of Nigeria at the World Bank in 1978. He holds a master's and doctorate degrees in Political Theory and Institutions from the University of Liverpool, where he worked between 1988 and 1991 as a comparative public administration and management resource faculty. Between 1991 and 1993, he was a senior research fellow and the research team leader of a team of researchers into the experiences of the African Caribbean People in Leicestershire, a project sponsored by the United Kingdom’s central government in collaboration with the Leicestershire County Council, Leicester Local Authority, and the University of Leicester. Between 1993 and 1997, he was head of department of Race and Community Studies at the Edge Hill University College. Widely published, his writings have been translated into Spanish, Chinese, and French. He is co-author of Representative Bureaucracy, Meritocracy, and Nation Building in Nigeria. He is a regular media commentator and analyst on public policy and governance in Nigeria and the U.K. He is an honorary fellow of the University of Leicester, and a life member of the U.K. Coaching Academy.

Toyin Falola is the Jacob and Frances Sanger Mossiker Chair Professor in the Humanities and a Distinguished Teaching Professor at The University of Texas at Austin. He is a Fellow of the Historical Society of Nigeria and a Fellow of the Nigerian Academy of Letters. He has received various awards and honors, including the Jean Holloway Award for Teaching Excellence, the Texas Exes Teaching Award, and seven honorary doctorates. Toyin Falola has published numerous books, most recently, The African Diaspora: Slavery, Migration and Globalization. He is the coeditor of Yoruba Studies Review and the general editor of the Cambria African Studies Series.