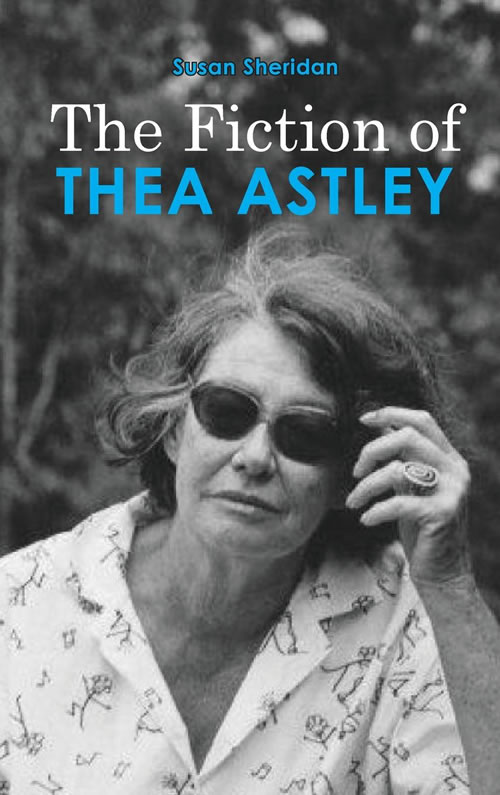 The Fiction of Thea Astley by Susan Sheridan

Thea Astley (1925-2004) was one of the outstanding Australian fiction writers of the twentieth century. Despite the deeply Australian objects of her satire, Astley’s innovative fictions have attracted critical attention beyond national boundaries, and her later work, especially, struck a chord with readers in North America. This book examines her works and reveals the reasons why Astley's works resonated with not only Australian readers but also an international audience.

This book is in the Cambria Australian Literature Series headed by Susan Lever (University of Sydney).

Thea Astley (1925-2004) was one of the outstanding Australian fiction writers of the 20th century. Four of her novels, including her last, Drylands (1999), won the prestigious Miles Franklin prize, and she was awarded numerous literary and civic honors during her lifetime. The distinctive appeal of her work comes from its unique sense of place, in tropical Queensland and the South Pacific, and from the mordant irony of her gaze on Australian society and her fiercely compassionate portrayal of social outsiders. Place and people reflect one another as Astley deals in climatic extremes both geographical and emotional: living ‘on the edge of the cyclone’, her people face the threat of personal annihilation with the frail weapons of irony, satire or anarchic humor.

Despite the deeply Australian objects of her satire, Astley’s innovative fictions have attracted critical attention beyond national boundaries, and her later work, especially, struck a chord with readers in North America. Astley felt strong affinities with a number of American writers, especially practitioners of shorter fiction like Hemingway, McCullers and Carver. Her work suggests comparison with that of William Faulkner, for the way it always inhabits the same imagined location. Place, and the parish of people who inhabit a particular place, are Astley’s persistent subjects. Her landscapes, whether the luxuriant coast or the dry inland, become metaphors of the human failings that preoccupy her; and, as she deepened her interest in the history of these locations, Astley imbued her landscapes with a necessary political dimension.

Astley’s fiction challenged the realist tradition that had dominated Australian writing in the first half of the twentieth century. In the postwar literary world where she began to publish she was readily accorded a place among the Australian mid-century modernists like Randolph Stow and Patrick White, who was an admired early mentor.

She was the only woman novelist of her generation to have won early success and published consistently throughout the 1960s and 1970s, when the literary world was heavily male dominated. As a fiction writer she had few female contemporaries until the 1980s, when ‘second wave’ feminism began to have a significant impact. Astley’s choice of focal characters, and the objects of her satire, changed to reflect that impact. Always a writer who avoided solemnity and undercut her characters’ claims to heroism of any kind, she reveled in the new-found capacity to mock male pretension and assert female rebellion.

This study of Astley’s fiction explores her representation of place and power relations, and the innovative work of historicizing place. It also examines how her works reveal her fascination with outsiders, misfits, and failures, as well as her skepticism about heroes. The book also examines how Astley's works delve into decolonization and bring a multilayered postcolonial perspective on colonial race relations. The book takes the reader all the way to the latter part of Astley's writing career, which amply demonstrates her capacity to bring together a critical exploration of patriarchal power relations and a postcolonial perspective on race relations, as well as her satire on the worship of unbridled ‘development’ which dominated Australian economic and social life during this period.

"Susan Sheridan relishes the complexity and dark comedy of Thea Astley's writing and honours her stand against greed, corruption, class prejudice, racism, and violence. The Fiction of Thea Astley not only places Astley within an international literary context but effectively confirms her as an outstanding Australian fiction writer." —Journal of Australian Studies

"Sheridan says, ‘One of my hopes for this book is that it will contribute to confirming her reputation as a major novelist.’ Sheridan herself is one of the most respected and reliable scholars in Australian literary studies, and this book should certainly fulfil her hopes for it; she is one of those critics who can manage to be engaging and readable without any glossing over or dumbing down of complex ideas. ... Unlike any critical discussion of Astley’s work that has preceded it, this book not only offers multiple comparative analyses of different novels, but also represents a kind of stepping back: a broadening of critical perspective to look at Astley’s entire oeuvre as a single entity, and to discern it." —Australian Book Review

"Susan Sheridan’s recent critical volume, The Fiction of Thea Astley (2016) is the first volume to cover all 16 of Astley’s works. This gives a sense of the development and breadth of Astley’s oeuvre, as well as her shift in setting from surburbia to small town to remote tropical locations. A highlight of the volume is its balanced attention to Astley’s critique of race and gender relations. Importantly, Sheridan explores how this is achieved creatively through an ongoing experimentation with the novel and short story form, narrative perspective, and a rich lyricism." —Australian Feminist Studies

"The Fiction of Thea Astley is an important book, both in its imaginative reach, its stylish form, and its critical insights about the fiction of Thea Astley. It offers the benefits of deep scholarship in a refreshingly readable style, making it the perfect choice for newcomers to Astley’s work. It is also possible for more informed readers to gain a lot from Sheridan’s approach since there is an elegant simplicity at work in her broader frame of reference to works by other writers and scholars." - The Journal of the European Association for Studies of Australia

"The Fiction of Thea Astley is an erudite and cogent deconstruction of the primary and auxiliary thematic preoccupations of Astley’s oeuvre. Sheridan’s intimate knowledge of Astley’s bibliography is admirable and supports her analytical and critical conclusions."- Transnational Literature

Susan Sheridan is professor emerita in the School of Humanities at Flinders University in Adelaide, and a Fellow of the Australian Academy of the Humanities. She was a founding editor of the journal Australian Feminist Studies (1985-2005). Her books include Nine Lives: Postwar women writers making their mark (2011), Christina Stead (1988), Along the Faultlines: Sex, Race and Nation in Australian Women’s Writing 1880s to 1930s (1995), and Who Was That Woman? The Australian Women’s Weekly in the Postwar Years (2002); as editor, Grafts: Feminist Cultural Criticism (1988), Debutante Nation: Feminism Contests the 1890s (1993) with Sue Rowley and Susan Magarey, and Thea Astley’s Fictional Worlds (2006) with Paul Genoni.

Chapter 1 ‘A study in emotions’: Girl with a Monkey, A Descant for Gossips, The Slow Natives

Chapter 2 ‘I needed a narrator’: The Well-Dressed Explorer, The Acolyte

Chapter 4 Violence: A Kindness Cup, An Item from the Late News

Chapter 7 Living in the Rainshadow: The Multiple Effects of Rainshadow, Drylands