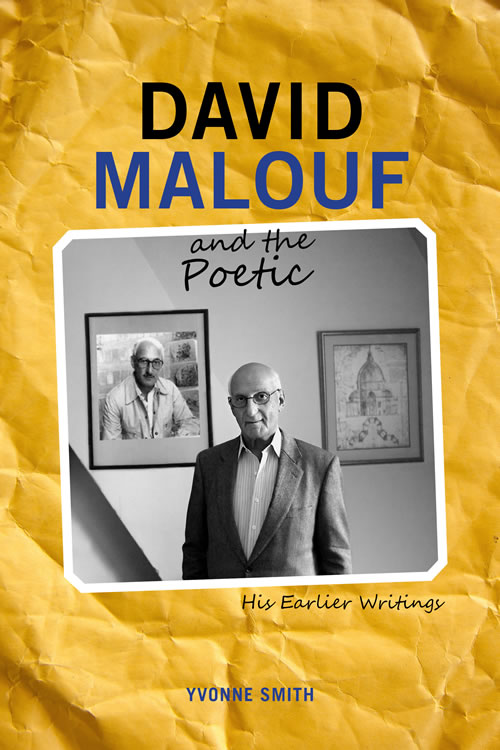 David Malouf and the Poetic: His Earlier Writings by Yvonne Smith

"In this carefully researched book, Smith offers close studies of a number of Malouf’s works including fiction and poetry against 'the context from which they arose'. This engaging, accessible study will well serve students and teachers. Meticulously researched." —The Australian

This book investigates his earlier writings to uncover what the terms “poetic”, “poetic imagination” and “inner and outer ways” imply for his development as a writer. Making use of some of his correspondence, diaries, and drafts of work-in-progress, Yvonne Smith takes into fuller account the way his works relate to each other and to the circumstances in which they were written.

By investigating what “poetic imagination” might mean across the first decades when he was finding his way into a writer’s vocation, this sturdy reaps fresh insights into the nature of David Malouf's creativity—its tensions, struggles and moments of breakthrough, as well as its potential limitations. Finding what he could not do (or did not want to do) shapes strongly what he wants to achieve by the mid 1980s when his published works are becoming better known.

Such considerations are touched on in earlier studies, yet have been sidelined by more recent criticism informed by postcolonial perspectives, debates about myths of origins and other Australian nation-based agendas. That Malouf has played a part, not only as a writer but as a public intellectual, in what Brigid Rooney terms his “consistent cultivation of nation” adds to this trajectory in his literary career. However, there has been less attention to Malouf’s development as a writer—its transnational dimensions, for instance, as he finds his vocation through hybrid family cultures and living for many years between Australia and Europe. It is helpful that discussion is increasingly balanced by broader views of what “Australian” literature might encompass, of global connections in “worlds within” national narratives, together with consideration of notions of “world literature” and a fluid “transnation” that exceeds boundaries of the state.

"In this carefully researched book, part of a series edited by academic Susan Lever, Smith considers what the idea of a 'poetic imagination' might mean, with the aim of offering 'fresh insights into the nature of [Malouf’s] creativ­ity — its tensions, struggles, and moment­s of breakthrough, as well as its potential boundaries'. ... Smith is a perceptive reader [and] offers close studies of a number of Malouf’s works including fiction and poetry against 'the context from which they arose'. ... There is a wealth of careful analysis here. ... This engaging, accessible study will well serve students and teachers. ... meticulously researched." —The Australian

"While not a biography per se, the book employs considerable biographical detail to good effect. ... Smith covers this biographical record admirably, and uses it judiciously with regard to Malouf ’s published output. Her considerable original research, via interviews, diaries, letters, and drafts of Malouf ’s work is also put to good literary-critical use. In this respect, David Malouf and the Poetic is a major resource for any student of Malouf ’s work. ... Smith’s approach – biographical and descriptive analysis – proves to be a powerful way to produce new insights into old works, a number of which (especially Johnno and An Imaginary Life) have already acquired a sizeable critical literature. ... Happily, Smith’s study helps us to pay closer attention, in turn, to Malouf ’s important body of early work." —Australian Book Review

"The book as a whole conveys a rich and satisfying sense of Malouf’s poetic use of language as the foundation of his canonical place in Australian literature, and the chapters on An Imaginary Life, Fly Away Peter, and Harland’s Half-Acre are among the best things written on those novels. ... a worthwhile addition to the growing shelf of Malouf monographs. In time no doubt some of Smith’s insights will be applied to the major works comprising the second half of his oeuvre, and that will constitute a welcome supplement." —JASAL: Journal of the Association for the Study of Australian Literature

Yvonne Smith is an independent researcher, English teacher, and former school principal. She earned her PhD from the University of Sydney where her thesis on Malouf’s writings was awarded the Eva Veronka Vidak Memorial Prize for a notable thesis on an Australian topic. Dr. Smith’s research on Malouf has been published in Australian Literary Studies, Southerly, Journal of the Association for the Study of Australian Literature, and in the edited collection What is the Human? Australian Voices from the Humanities (Australian Scholarly Press).