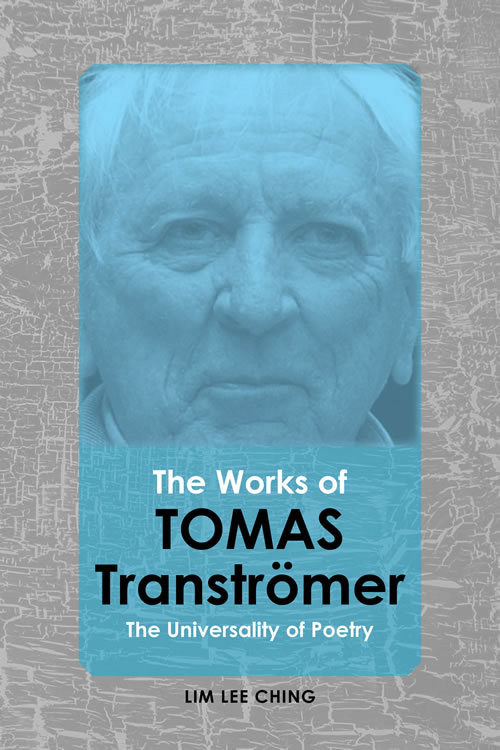 The Works of Tomas Transtromer: The Universality of Poetry by Lee Ching Lim

"This study offers compelling and insightful close readings of Tomas Transtromer’s poetry. It covers the poet’s entire body of work, and in that regard, it is also an important contribution to the field. The writing is clear, elegant, and a pleasure to read. The quality of the prose (along with the close reading of the poetry) is one of the strongest aspects of this book." —Angela A. Frattarola, New York University

Tomas Transtromer (1931–2015) is one of Sweden’s most important writers. He is also one of the most influential figures in contemporary world literature. His career spanned fifty years, and thirteen collections of poetry, which include 170 poems. He also wrote a short memoir of his youth, titled Memories Look at Me (1993).

Transtromer’s poems have been translated into more than 60 languages, including Chinese, Japanese, Persian and Malayalam. Celebrated as a poet’s poet, Tomas Transtromer is greatly admired by such literary luminaries as Robert Bly, Robin Robertson, Adonis and Bei Dao. Some of his most widely read poems include: “The Sad Gondola”, “Vermeer”, “Schubertiana” and “The Outpost”, while his extended work, Baltics (1974), remains a masterpiece of 20th century literature. Among the array of awards that he has received are the Neustadt International Prize for Literature (1990), the Swedish Academy Nordic Prize (1991), the Griffin Poetry Prize (2007), and the Nobel Prize for Literature (2011).

In Transtromer’s writing, there is an authentic relationship that bridges poetic articulation and the processes of critical interpretation. It is one that hinges on the equilibrium between experience and expectation. The poetry shows tremendous control and balance. It informs an entire system of considering individual and collective perceptions, which corresponds with the terrain of phenomenological apprehensions.

While Tomas Transtromer’s work has made significant contributions to world letters, the scholarship in English is vastly underrepresented. Apart from a few academic articles over the years, there is no single, extended study of the poetry in English. In order to situate the endurance of his poetic career in relation to the ascendancy of critical interests in Transtromer studies since the award of the Nobel Prize, a consolidated examination of his complete works is timely.

The importance of Transtromer’s work is the universality that the poetry attains. His is a persistent art, inherently secure about how it relates with the cultural landscape. There is discernible consciousness of the aesthetic heritage that it inherits and continues. Crucially, these are marked by a pointed lesson in how sustained art emerges from vocational discipline. The poems project a sense of a poetic career that corresponds with the very nature of poetry itself; a demonstration of the continuous pendulation between introspection and public expression. Transtromer’s writings alert us to the pitfalls of complacency that can stem from our over-reliance on stable affirmations and reassurances. He achieves his overarching objectives by taking a two-pronged approach: assuming an intellectual perspective that resonates with readerly experience; and an insistent aesthetic impulse that seeks to efface barriers of all kinds.

In this first book-length study of Tomas Transtromer’s work, in English, Lim Lee Ching takes on the massive task of scrutinizing all of Transtromer’s poems. The Works of Tomas Transtromer deals with the wide variety of ideas and issues that the poet deals with over the course of his long career, in a manner that befits their gravitas. This book is a return to the critical tradition; it provides a poem-by-poem approach to the Transtromer corpus. The poems maintain a nexus of ideas that is marked by a kind of constancy in the face of evolving intellectual tastes. The Works of Tomas Transtromer focuses on the poetry’s qualities of quiet persistence and consistency, distilling for the reader crucial lessons about the possibilities of sensible conduct in a culture that privileges the extravagance of newness. Yet, within this constancy lies a craft that shows us a deeper process of maturation that combines both forces of stability and the energies of uncertainty amid change. This book shows how much we have to learn from Tomas Transtromer.

The Works of Tomas Transtromer is an important addition to all poetry, Modernist studies and Scandinavian literature collections.

"This study offers compelling and insightful close readings of Tomas Transtromer’s poetry. It covers the poet’s entire body of work, and in that regard, it is also an important contribution to the field. The writing is clear, elegant, and a pleasure to read. The quality of the prose (along with the close reading of the poetry) is one of the strongest aspects of this book." —Angela A. Frattarola, New York University

"The Works of Tomas Transtromer is a well-crafted, lucid examination of the Nobel laureate’s entire corpus of poems. Built from strong analytical skill, Lim’s illuminations of the poet’s footprints form a unique constellation, thereby allowing us to commune with the poet’s projections. This first book-length study in English is a much-needed one in contemporary literature." —Adam Staley Groves, University of Aberdeen

Lim Lee Ching is a senior lecturer of literature at SIM University, Singapore. He holds a PhD from the National University of Singapore, and a BA from the University of London. Dr. Lim’s recent publications include contributions to Global Encounters: Cross-Cultural Representations of Taiwan and American Modernist Poetry and the Chinese Encounter. He has published in several journals such as Moving Worlds and The Journal of English and American Studies. Dr. Lim is also the founding editor of the Singapore Review of Books.

Chapter Two: “A Parachute jump from dreams”: 17 Poems—Secrets on the Way—Prison

Chapter Three: “To be always visible”: The Half-Finished Heaven—Bells and Tracks

Chapter Four: “The gleaming membrane”: Seeing in the Dark—Paths

Chapter Seven: “God’s wind in the back”: The Sad Gondola—The Great Enigma