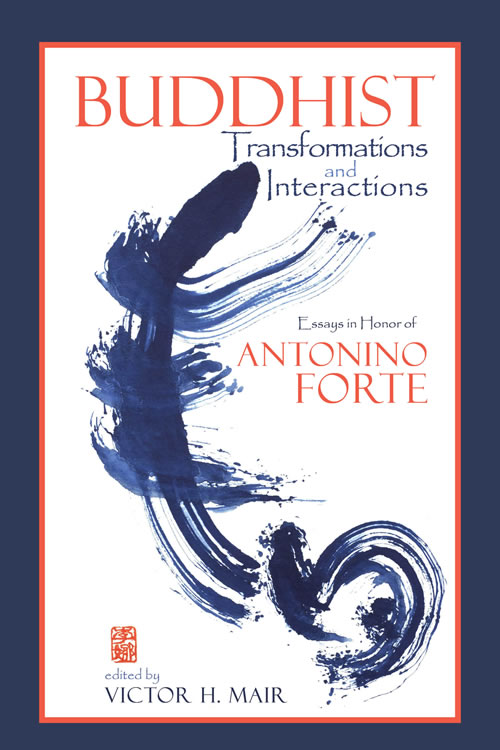 "Each chapter reads like a node in a vast and ongoing network of themes, and promises to become the starting point for new and exciting lines of research. This book is a most valuable resource for scholars in Buddhist studies and Chinese religious studies.” —Fabio Rambelli, Professor of Religious Studies & East Asian Languages and International Shinto Foundation Chair in Shinto Studies, University of California, Santa Barbara

One of the greatest scholars of Chinese and Japanese Buddhist history was Antonino Forte (1940–2006), who was Director of the Italian School of Oriental (later East Asian) Studies in Kyoto for many years. At the institute Professor Forte welcomed scholars from around the world to use the magnificent research library he had built up, and he generously shared his vast erudition on countless subjects related to East Asian medieval Buddhist history.

Professor Forte's approach to Buddhist Studies was like that of a detective attempting to solve a difficult case. He displayed his investigative skills in a series of important projects such as those in which he addressed the riddle of the origins of The Great Cloud Sutra, the mystery of Empress Wu's massive tower and astronomical clock, and the case of the Iranian prince held hostage at the Tang court. Forte was relentless in tracking down the last available bit of evidence, for he was convinced that, when he brought all of the available data together, the answer would emerge with pellucid clarity. This intensely empirical approach extended to archaeological remains. Few Buddhist historians have dedicated so much attention and energy to reading archaeological reports and even going into the field to carry out onsite investigations as Antonino Forte. The same data-driven spirit informs the chapters in this tome dedicated to Professor Forte’s legacy.

This volume is unusual in the way that it assembles the research of distinguished scholars from various fields and regions. All these scholars knew Professor Forte personally and were influenced by his scholarship. Seldom does one find the combination of spatial breadth, temporal depth, and conceptual rigor that is abundantly present in Buddhist Transformations and Interactions. The purpose of bringing together the twelve chapters in this book is to exemplify the method and principles of Antonino Forte’s own work. At the same time, the authors collectively wish to illustrate significant facets of Buddhism as it developed during the vital middle period of East Asian history, as well as what preceded and succeeded that period.

One of the main themes that runs through Buddhist Transformations and Interactions is that of borders and their crossing. In very concrete ways, the individual chapters look at how Buddhism passed from India to Central Asia and China and Korea, and from China and Korea to Japan. But crossing is not merely geographical, hence cultural and doctrinal transformations and adaptations are also examined closely. Following the example of Antonino Forte, the authors ground their investigations in historical specifics, but they are also keen to grasp the intellectual and conceptual implications of the various manifestations of Buddhism that they describe.

While centered in East Asia (China) and Northeast Asia (Japan and Korea), the volume also embraces South Asia (India), Southeast Asia (Vietnam), and Inner Asia (Khitan), in disciplines ranging from history to literature, from art and architecture to archaeology, as well as the scripture and practice of religion. This study vividly demonstrates the commonality of Buddhist religion and culture cutting across the eastern part of Asia, with due attention to their roots in South Asia and parallels in Central Asia and Southeast Asia. While acknowledging the oneness of Buddhism in Asia, the authors are sensitive to the unique features of the religion and its culture as manifested in the various regions where it is found, and they have endeavored to describe them in detail.

Offering a rare and rich assortment of cutting-edge Buddhological research on diverse topics, this study examines topics such as nirvana and maya, sacred sites, monastery origins, biographical writing, sectarianism in China and Japan, funeral rituals, miracle tales and strange stories, architecture, and lineage transmission. An attentive reading of Buddhist Transformations and Interactions will provide readers with a much better appreciation and understanding of East Asian Buddhism.

“This book is marked by very high levels of technical Buddhological knowledge and critical research. The list of its contributors reads like a 'who’s who' in the fields of Buddhist and Asian Studies. The volume effectively covers large areas of eastern and southern Asian history, while pursuing pointed interest in Buddhist-informed cultures which interacted with each other over millennia and exchanged a multitude of ideas, images, scriptures, and rituals. Due to Victor Mair’s formidable editorial work, the result is a uniquely encompassing cultural map of Asia’s dynamic history whose complexity and multileveled nature is only now being properly understood. A well-deserved celebration of the memory of Antonino Forte, a great scholar and person, this book is an outstanding contribution to our knowledge of Buddhist and Asian culture in many of its previously uncovered aspects and nuances." —Tanya Storch, Professor of Religious Studies, University of the Pacific

“This study holds substantial and innovative contributions that explore little known but important topics in Buddhist studies and Chinese religious studies. It is an important homage to Antonino Forte, one of the protagonists of these fields and a great teacher to three generations of scholars. Forte was like a detective looking for clues in history, people, and places now almost completely erased from cultural memory, but which played an important role in shaping Buddhism in East Asia. It is his relentless interest in cultural oblivion, and in the richness of cultural exchanges in the past, in addition of course to his erudition and scholarly acumen, that makes Forte’s research particularly powerful and continuously relevant. This book is much more than a series of papers exploring topics related to Forte’s own work and/or written by scholars who were close to him. In fact, this is a remarkably well-constructed and organized collection—and in a sense astonishingly so, especially when we consider the breadth and depth of Forte’s own scholarship and his lasting influence on scholarship. Each chapter reads like a node in a vast and ongoing network of themes, and promises to become the starting point for new and exciting lines of research. This book is a most valuable resource for scholars in Buddhist studies and Chinese religious studies.” —Fabio Rambelli, Professor of Religious Studies & East Asian Languages and International Shinto Foundation Chair in Shinto Studies, University of California, Santa Barbara

“This volume is a fitting tribute to Antonino (“Nino”) Forte, whom the field of East Asian Buddhist studies lost prematurely a decade ago. It assembles some of the finest scholars currently working in East Asian Buddhisms today, and their contributions demonstrate how actively Buddhist ideas and ideologies intersected with transregional polities and politics. We see in the studies here the importance of the multidirectional transmissions of Buddhist traditions: the usual route of India to China to Japan is here problematized by the recognition that at particular moments the influences were substantially interactive and bilateral. Nino would be very pleased by these border crossings, as his own work did so much to make the cosmopolitanism of Tang Buddhism so vividly real for us.” —Daniel Boucher, Associate Professor of Asian Studies, Cornell University

“The work of Antonino Forte was a unique combination of tremendous intellectual creativity and profoundly rigorous scholarship that spanned the geographical and chronological boundaries of Chinese, Indian, and Japanese Buddhism. The impressive originality, depth, and range of the global scholarship in this volume honors, celebrates, and reflects the very qualities that define Forte’s legacy.” —D. Max Moerman, Professor of Asian and Middle Eastern Cultures, Barnard College, Columbia University

“A remarkable collection of essays by eminent Buddhist scholars and sinologists who have, in one way or another, been strongly influenced by Antonino Forte's methods, ideas, and personality.” —Bernard R. Faure, Kao Professor of Japanese Religions, Professor of East Asian Languages and Cultures, Columbia University

Victor H. Mair is professor of Chinese language and literature at the University of Pennsylvania. He holds a PhD from Harvard University and an MPhil from the School of Oriental and African Studies of the University of London. Professor Mair is the general editor of the Cambria World Sinophone Series, as well as the editor of Sino-Platonic Papers and of the ABC Chinese Dictionary Series at the University of Hawaii Press. He is the coauthor of Sacred Display: Divine and Magical Female Figures of Eurasia and The Tarim Mummies: Ancient China and the Mystery of the Earliest Peoples from the West (2000), the author of The Art of War: Sun Zi's Military Methods (2007), and the editor of The Columbia History of Chinese Literature (2001).

Chapter 1. On the Origins of the Great Fuxian Monastery in Luoyang (Antonino Forte)

Chapter 2. Buddhist Nirvana and Its Chinese Interpreters: A Note (Timothy Barrett, School of Oriental and African Studies, University of London)

Chapter 3. The Borderland Complex and the Construction of Sacred Sites and Lineages in East Asian Buddhism (Jinhua Chen, University of British Columbia)

Chapter 4. Maya in Buddhist Art and in the Buddhist Legend (Hubert Durt, formerly of the International College for Advanced Buddhist Studies Tokyo)

Chapter 6. The Correspondence Between Chinese Tiantai and Japanese Tendai Monks in the Mid-Heian Period (Paul Groner, University of Virginia)

Chapter 7. Glimmerings of India: Nukariya Kaiten and the Transmission of Zen from India to China (John R. McRae [(1947–2011], formerly of Indiana and Cornell Universities)

Chapter 11. Chan Yulu as a Means of Integration across Culture: Reflections on the Fictional Background to Chan’s “Encounter Dialogues” (Yulu) (Albert Welter, University of Arizona)