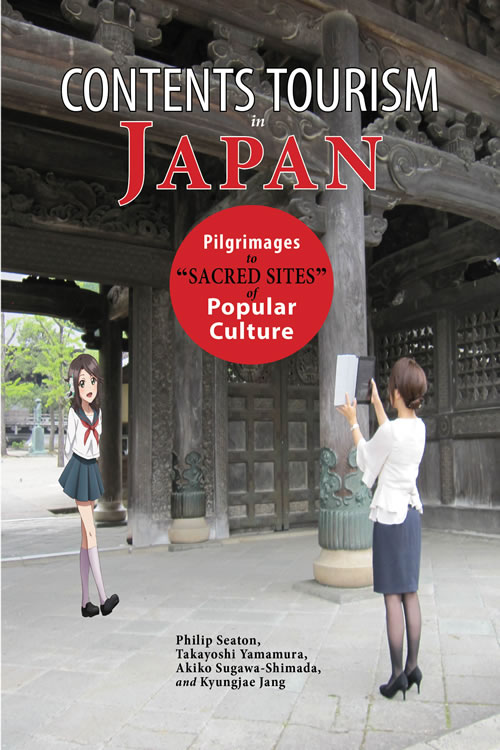 “This may be the best book ever written on tourism in Japan! This work is one of the most important subjects in contemporary tourism studies and Japan studies, perhaps a forerunner of things that are also happening in the Korean and Chinese worlds and elsewhere, which makes it doubly important. This book is comprehensive in many ways." —Nelson Graburn, University of California, Berkeley

In 2004, the large numbers of Japanese people who visited South Korea after watching the Korean television drama Winter Sonata caught the Japanese government’s attention. In 2005, the government recognized in official documents for the first time that Japanese popular culture had another potential: to increase international visitor numbers to Japan and energize the domestic tourism industry.

The term used in Japan to describe this form of tourism induced by popular culture is kontentsu tsurizumu, “contents tourism.” Contents tourism is defined as travel behavior motivated fully or partially by narratives, characters, locations, and other creative elements of popular culture forms, including film, television dramas, manga, anime, novels, and computer games.

This book presents a comprehensive theoretical and historical overview of the phenomenon of contents tourism in Japan. Government, mass media, and scholarly interest in contents tourism is relatively new, and in its modern guise contents tourism behavior is closely associated with digital technology, the Internet, and social media.

However, travel inspired by “contents” actually has a long history going back centuries. This book traces the development of contents tourism from its roots in religious pilgrimage and the earliest forms of poetry-inspired travel through to the most recent developments in anime location hunting and augmented reality gaming.

In English-language scholarship, study of pop culture tourism has often focused on particular works or media formats. These approaches remain valid in many cases, but the theories and methods of “film-induced tourism” or “literature tourism” were never easily adapted into the Japanese setting.

The rich history of derivative works, parodies, and multiuse of the same contents in a media mix enriched by the highly popular formats of anime and manga led Japanese scholars to seek a different approach to analyzing the links between popular culture and tourism.

Scholars and those working in creative industries settled on the concept of “contents,” and focused on asking how and why particular creative elements resonated with fans and how fans’ interests in a “narrative world”—whether fantasy, fictional, or even largely non-fictional—could inspire travel to actual places, which came to be referred to as “sacred sites” by fans.

In the twenty-first century, with culture industries worldwide now distributing and marketing their creative contents via multiple media platforms, the concept of “contents” and its links to tourism are of ever-increasing relevance to countries other than Japan.

This book presents a vast range of works, artists and contents that have generated “sacred sites” across the length and breadth of Japan. Some sets of contents trigger tourism over only a short time period, while others have been inducing tourism for decades or even centuries.

The comprehensive mapping of the phenomenon, both temporally and spatially, allows all past and present examples of contents tourism to be seen within a clear context. Furthermore, the book presents a detailed theoretical framework of how relationships are formed between and among the three main players of contents tourism: fans, contents businesses and local authorities. By doing so, it illuminates why some forms of contents tourism are simply localized flashes in the pan, while others go on to become embedded within the travel culture of the nation.

Contents Tourism in Japan is a groundbreaking book in an important and rapidly emerging area of scholarly, media, political and business interest. It will be of interest primarily to scholars and practitioners with a specialization in tourism and media, but also to those studying contemporary popular culture in Japan and East Asia.

"This is rich analysis. It not only proposes an approach for analysing how people and places benefit from content tourism, it convincingly applies its framework to provide valuable insights for those interested in Japanese history and culture, and for modern and international media and tourism scholars. The authors draw on an extremely wide range of sources to develop their method, and to illustrate content tourism in Japan using their own research, including many illustrative photographs of people, derivative content and places. In all, Contents Tourism in Japan provides a new understanding of how people in Japan have used the popular culture of their day as inspiration to travel, enhancing their enjoyment of their favourite content and transferring economic benefits upon the producers of the content and the places associated with it." —Tourist Studies

"This book is an interesting read for three reasons: the narratives of Japanese history, the characters and events, and the touristification process in the book are cleverly interwoven to reveal the essence of contents tourism in Japan. First, it provides snippets of Japanese history narratives that are not too lengthy but sufficient to give insights into contents tourism in the context of Japan. Second, the various characters and events mentioned—historical figures such as Matsuo Basho and Masaoka Shiki (poets), Jippensha Ikku (travel author), and Date Masamune (daimyo), and popular culture emblems such as Luck Star (manga) and Koitabi (augmented reality tour)—represent lively and interesting examples to illuminate the emergence of popular culture and its relation to contents tourism. Finally, the touristification process highlights the lucrative potential of popular culture as a critical component for creating tourism content; however, it also reveals flaws. The touristification process reinforces the need for different stakeholders (fans, community, corporations, government) to cooperate and sustain tourism business for local and national economic growth. The book flows well and is an easy and accessible resource to help readers, in particular those who have no background knowledge of contents tourism, understand what constitutes this type of tourism in Japan. This book is useful as a foundation study of contents tourism for undergraduates. It is also a fun read for those who are interested in contents tourism in general and in Japanese popular culture in particular." —H-Net Reviews

"The book provides a succinct history of Japanese tourism [and] also skillfully illustrates the painful history of bubble-era tourism excess." — The Japan Times

“This may be the best book ever written on tourism in Japan! This work is one of the most important subjects in contemporary tourism studies and Japan studies, perhaps a forerunner of things that are also happening in the Korean and Chinese worlds and elsewhere, which makes it doubly important. This book is comprehensive in many ways. It is historically complete, from prehistory up to the contemporary Internet. It covers many different kinds of domestic tourism in all areas of the country. It covers a huge range of institutions involved in promoting, financing and operating tourism and fan clubs. It is well organized and very well written. It is comprehensively illustrated with good photographs and diagrams. A marvelous and fascinating book!” —Nelson Graburn, University of California, Berkeley

“This is a much-needed, welcome contribution to the field of film-induced tourism and pop culture studies, which the authors have expanded to give us a broader understanding of ‘media’ and tourism. We are privileged to be able to include this work into the English-language literature. While set in a Japanese context, contents tourism can and should be more widely understood and applied, and this book helps fill that gap as an eminently readable, legible and rigorous study that incorporates Western as well as Asian sensibilities and comprehension.” —Sue Beeton, William Angliss Institute, Australia

“This book provides a fascinating exploration of the ways in which diversified Japanese media-induced tourism has historically and geographically developed and evolved. It also offers a new perspective on the convergence of tourism and popular culture by introducing a new term, contents tourism, which originated in Japan to represent tourism induced by various creative elements of popular culture forms. The book’s compelling analysis of media-induced tourism using a case study of an entire nation, Japan, makes this important book of great interest to a wide readership.” —Chieko Iwashita, Takasaki University of Commerce, Japan

“This book will lead you into the complex and fascinating world of Japanese contents tourism. It follows its players and patterns in the twentieth century with examples from throughout the country to show the historical roots of this ‘new’ type of tourism while also emphasizing the radical changes in the twenty-first century. The research in this book impresses with its clarity and comprehensiveness and is both well grounded in regional studies and theoretically thought-provoking. It will be an important source for everyone interested in tourism and popular culture.” —Carolin Funck, Hiroshima University, Japan

Philip Seaton is Professor at the Institute of Japan Studies at the Tokyo University of Foreign Studies. Prior to this appointment, he was a professor in the Research Faculty of Media and Communication, Hokkaido University, where he is the convenor of the Modern Japanese Studies Program. He holds a DPhil and MA from the University of Sussex and a BA from the University of Cambridge. Dr. Seaton’s previous publications include Japan’s Contested War Memories, Voices from the Shifting Russo-Japanese Border: Karafuto/Sakhalin, and Local History and War Memories in Hokkaido. He coedited a special issue of Japan Forum in 2015 “Japanese Popular Culture and Contents Tourism” and is editor-in-chief (along with Takayoshi Yamamura) of the International Journal of Contents Tourism. His website is www.philipseaton.net.

Takayoshi Yamamura is a professor in the Center for Advanced Tourism Studies, Hokkaido University and holds a PhD in urban engineering from the University of Tokyo. He is one of the pioneering researchers of ‘contents tourism’ and ‘anime induced tourism’ studies in Japan. He has served as the Chair of several governmental advisory boards, such as the Meeting of International Tourism Promotion through Animation Contents of The Japan Tourism Agency and the ANIME-Tourism Committee of Saitama Prefecture. In addition to numerous publications in Japanese on contents tourism, Dr. Yamamura’s English publications include "Contents Tourism and Local Community Response," Japan Forum (2015), and "The Mediatisation of Culture: Japanese contents tourism and popular culture" (with Sue Beeton and Philip Seaton) in Mediating the Tourist Experience: From Brochures to Virtual Encounters. His website is http://yamamuratakayoshi.com/en/

Akiko Sugawa-Shimada is an associate professor in the Graduate School of Urban Innovation at Yokohama National University. She holds a PhD from University of Warwick and an MA from the University of Chicago. Dr. Sugawa-Shimada is the author of a number of books and articles on anime, manga, and cultural studies, including Girls and Magic: How Have Girl Heroes Been Accepted?, chapters in Japanese Animation: East Asian Perspectives and Teaching Japanese Popular Culture, and “Rekijo, Pilgrimage and ‘Pop-Spiritualism’: Pop-culture-induced Heritage Tourism of/for Young Women” in Japan Forum and “Interplay with Fantasy: 2.5-dimensional Culture as Performance, and Imagination” in Eureka. Her website is www.akikosugawa.2-d.jp.

Kyungjae Jang is a postdoctoral researcher in the Center for Advanced Tourism Studies, Hokkaido University. He holds a PhD and MA in tourism studies from Hokkaido University, and a BA from Korea University. Dr. Jang has conducted participatory research on transnational Japanese contents tourism, focusing on popular culture-related tourism and events in the USA, France, Tunisia, Korea, Taiwan, and Hong Kong. Dr. Jang was also the keynote speaker at the 2016 Tourism Summit Forum, China.

Chapter 1. The Players and Patterns of Contents Tourism