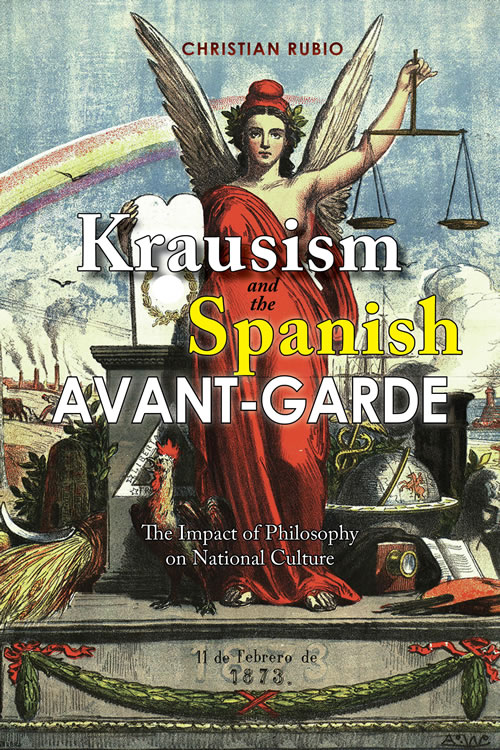 Krausism and the Spanish Avant-Garde: The Impact of Philosophy on National Culture by Christian Rubio

"Rubio’s work underpins a groundbreaking understanding of the artistic and social movements of this era. … An innovative study that confronts the traditional understanding of culture in Spain during the turn of twentieth century.” —Rocky Mountain Review of Language and Literature

At the turn of the eighteenth century, Spain witnessed the rise of a liberal side that directly confronted the government during the First Carlist War (1833–1839), considered by many as the first civil war. After this conflict, many liberals felt the need to continue challenging the status quo, and to that end, they explored new concepts that originated beyond the borders of the Iberian nation. In many ways, they found their answer in the philosophical movement known as Krausism. Founded in Germany by Karl Christian Krause, introduced in Spain by Ruperto Navarro Zamorano in 1841, and expanded by Julián Sanz del Río when he published Ideal de la Humanidad para toda la vida (1871), Krausism led to several important changes, including in politics. In fact, Krausism was considered to be driving force behind the Revolution of 1868, which brought the First Republic (1873–1874).

However, Krausism also had great impact in other important fields, such as education and the arts. At a time when Spain’s literacy rate bordered ninety percent, the need for a major overhaul in their education was a rare topic of agreement for liberals and conservatives. One of the most important educational centers that propelled those much-needed changes was the Institución Libre de Enseñanza (ILE), a school founded under the influence of Krausism. This center paved the way for the foundation of future institutions, such as La Junta de Amplicación de Estudiantes. Continuing with ILE’s ideology, this council launched various important schools, among them were La Residencia de Estudiantes and La Residencia de Señoritas. These two schools provided the ideal place for the development of the Spanish avant-garde. Equally important, Krausism brought to Spain the topic of aesthetics, which was introduced as a school subject by Sanz del Rio, and further explained by the founder of ILE, Francisco Giner de los Ríos, when he translated the works of Krause on the topic. These various introductions allowed men and women to explore new concepts in arts and display their talents.

With the ever changing definition of Modernism, many Spanish critics continue to treat Spanish Modernismo as a different entity compared with the European version. This traditional approach in Modern Peninsular Literature and Cultural Studies has allowed for a generational division of literary and artistic production in Spain. These generations, encompassing over fifty years, follow a set of rigid outlines that have isolated specific writers according to their birth year, a historical event, and certain selected themes. This mindset enabled that method to set the standard in many studies and surveys, where the avant-garde—otherwise known as vanguardismo—has been considered part of the so-called Silver Age. However, recent investigations encourage a departure from this approach because it has not allowed new inquiries regarding the role of movements, places, and people during those years. This book responds to this call and offers an innovative approach to looking at various developments that occurred in Spain. By historicizing the emergence and impact of Krausism on the Spanish culture, this study answers questions such as: What made Spain the perfect place for the avant-garde? And, what events paved the way for the development of these movements?

This is the first study that directly links Krausism to the Spanish avant-garde. To this end, the book is presented in chronological order in efforts to highlight how Krausism evolved and affected the culture of Spain. Those changes occurred in the fields of education, politics, philosophy, literature, and arts, to name a few. The effects in these fields allowed for artists and writers to challenge the tradition, embrace new ideas, and experiment with aesthetics, which all led to the Spanish avant-garde. Furthermore, this book will spark a debate in the wider audience and serve as a springboard, as well as a guide to new ways to analyze important cultural periods in Spain. To continue with the traditional approach would mean continuing to neglect the influence of ideologies, the importance of key playmakers, and the acceptance of obsolete paradigms as a norm.

Krausism and the Spanish Avant-Garde is an important book for researchers, teachers, and students, both at the undergraduate and graduate level, in the fields of cultural studies, Spanish avant-garde, philosophy, and education.

"Krausim and the Spanish Avant-garde is a comprehensive study that aims to illustrate the long-lasting effect that this German philosophy had on Spanish society by revisiting two key factors: educational reforms and aesthetical analysis. Rubio’s work underpins a groundbreaking understanding of the artistic and social movements of this era. Rather than separate them in different generations, Rubio entwines them together with the same guiding thread: Krausism. … an innovative study that confronts the traditional understanding of culture in Spain during the turn of twentieth century. Rubio´s new approach to Spanish cultural studies fits better within the European context because the author places Spain on the same level as other countries, rather than separating it from the rest of the continent. Rubio demonstrates that Krausism and its evolution within the Spanish cultural landscape effectively invigorated and reshaped national culture. … Rubio’s work provides a new thread of discussion in Spanish cultural studies and illustrates the need to revisit traditional understandings of the field." —Rocky Mountain Review of Language and Literature

"In Krausism and the Spanish Avant-Garde, Christian Rubio argues convincingly that Krausism had a practical effect on everyday life and in literature—that it provided a non-religious alternative to harmonize tradition and modernity. It was a pragmatic Kantian idealism that advocated, among other ideas, democracy and equalitarian marriage. Previous critical work on Krausism has focused on its impact on realism. The novelty of Rubio’s study is that it extends its influence to postrealism movements like modernism (in the Anglo sense of the term), the avant-garde, and women’s right’s literature. This book is a must read for those interested in the influence of Krausism and Kantian philosophy in Spanish culture during the early twentieth century.” —Salvador A. Oropesa, Professor of Spanish and Chair of the Department of Languages, Clemson University

“Christian Rubio's book is a groundbreaking contribution to the study of the Spanish avant-garde by unravelling its remote Krausist sources of inspiration. The shifting relationship between Spanish ethics and aesthetics and European cultural change, and its specific local re-significations, is thoroughly mapped out in this study. By focusing on influential figures of the national intellectual life through this innovative prism, this book sets a new benchmark in the field of cultural studies.” —Gregorio Alonso, Lecturer in Spanish History, School of Languages, Cultures and Societies, University of Leeds

“Christian Rubio's Krausism and the Spanish Avant-Garde is a timely reminder of the remarkable and long-overlooked staying power of a movement that set out to unlock humankind's creative potential. Written in a highly accessible manner, the book provides valuable insight on how Spanish thinkers adopted, transformed, and developed a European philosophical movement until it became an intrinsic part of culture in Spain. Rubio’s book achieves that rarest of balance: a thought-provoking study for students and seasoned scholars alike.” —Henriette Partzsch, Lecturer in Hispanic Studies, School of Modern Languages and Cultures, University of Glasgow

“Christian Rubio provides a refreshing, clearly articulated and well-researched study on the impact of Krausism on Spain and the avant-garde movement via the notion of 'Europeanization,' while he challenges traditional critical trends that persist with categorizing Spanish literature within generations. In addition, Rubio devotes a much-needed, entire chapter on Krausism’s impact on Spanish women, while at the same time underscoring the importance of the often overlooked contributions by Rosario Acuña and Carmen de Burgos. This important book is a necessary reference for anyone interested in Krausism, the Spanish avant-garde, and Spanish history and culture at the turn of the twentieth century.” —Mark P. Del Mastro, Chair and Professor of Hispanic Studies, College of Charleston

Christian Rubio is an associate professor of Spanish at Bentley University. He holds a PhD from Columbia University, an MA from Teachers College-Columbia University, and a BA from CUNY Queens College. Dr. Rubio’s previous publications include La influencia de la masoneria en Antonio Machado. He has also published in several journals such as the International Journal of Humanities and Alba de América. In 2011, Dr. Rubio was appointed permanent member as correspondent at the Academia Norteamericana de la Lengua Española (ANLE).

Chapter 3. Traditionalists and Trailblazers of the Europeanization

Chapter 4. The Relevance of Krause’s Aesthetics to the Avant Garde