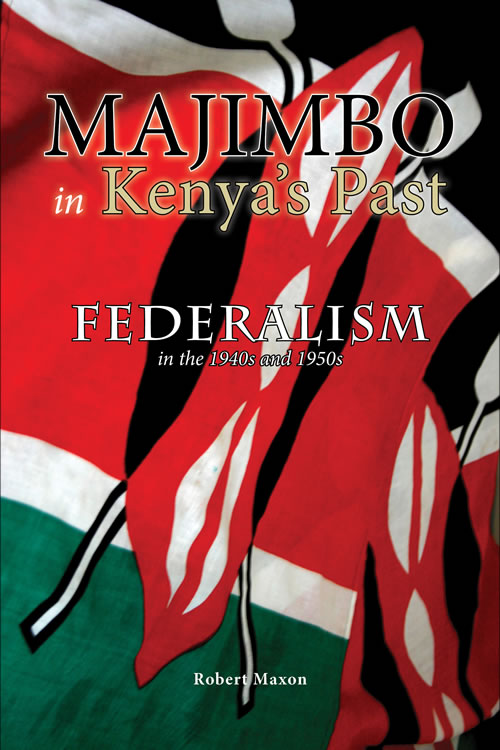 Majimbo in Kenya’s Past: Federalism in the 1940s and 1950s by Robert Maxon

"After discussing the Dawe’s plan, presented to the Colonial Office in 1942 and calling for a grant of self-government to Kenya’s settlers in the White Highlands, Maxon discusses the majimbo plans put forward in the 1950s. ... This is a work of impressive and careful scholarship." —International Journal of African Historical Studies (IJAHS

Advocacy for federalism in Kenya emerged amidst World War II and its aftermath. The rapidly changing political, economic, and social environment in Great Britain and British colonies in Africa formed the background for uncertainty and concern for the future among Kenya’s European settler minority. Federalism’s appeal came forth among a portion of the European community and some of the colonial rulers who were concerned about a post-war world that seemed certain to bring far reaching changes in Britain’s most important East African dependency. These included democratization, the extension of civil liberties, increased economic opportunities for the African majority, and social integration leading to eventual decolonization. European anxiety as to the impact of such changes on their privileged political, economic and social status produced advocacy for majimbo or a federal system of governance between 1940 and 1960.

This advocacy for federalism emerged in a colonial political system defined by a racially differentiated electorate with separate representative systems and voting by racially defined groups. The European minority in Kenya enjoyed pride of place in 1945, but demands for greater political participation from the larger Asian and African communities and the British government’s support for a sharing of power among Kenya’s racial group placed Kenya’s Europeans on the defensive. The declaration of a state of Emergency in Kenya in October 1952 and the outbreak of the Mau Mau war/rebellion added to European concerns and uncertainties that provided powerful fuel for federalist ideas throughout the rest of the decade. For example, the political reforms pushed by the British government and the colonial state in response to the war/rebellion provoked enhanced calls for federalism among the vocal minority among the European community.

Federalism remains a controversial topic in Kenyan history and in contemporary Kenya. In the current century, federal advocacy has been viewed by scholars and public as responsible for outbreaks of pre- and post-election violence. The movers and motives of federal advocates is also a subject that provokes strong opinions as they have often been viewed as racists or tribalists. It is thus important to examine and analyze the movers of majimbo, their motives, the shape and substance of their schemes, and the reasons for their lack of success in moving late colonial Kenya to adopt a federal system. This book demonstrates that the decade of the 1950s was the high water point for federalism in Kenyan history. Finally, it is critical to closely review that decade’s federalist advocacy in light of Kenya’s adoption of a federal scheme of governance with the 2010 constitution.

This is the first detailed study of federalism in Kenya during the 1940s and 1950s that provides important grounding and background for the understanding of the later emergence of majimbo in the independence era (1961-1963) and later. The book identifies the movers of federalism during the period of study as well as providing in-depth analysis of the political parties they used to promote provincial autonomy and evolution plans. These include the Federal Independence Party, the Progressive Local Government Party, and the United Party. The analysis reveals that the movers backed majimbo as a defensive mechanism. They hoped it would serve as a means of protecting and perpetuating white privilege in terms of political dominance, segregated schools and public facilities, and, most of all, exclusive European control of a large portion of the colony’s productive farm land, the white highlands.

Majimbo in Kenya’s Past is an important book for African studies, history, and politics.

"In Robert Maxon’s welcome book, Majimbo in Kenya’s Past: Federalism in the 1940s and 1950s, losers come front and center. The author does not focus on the leading lights of the settler community, also part of the losing side in the narrative of Kenya’s decolonization. This is not a book about Lord Delamere, Michael Blundell, Wilfred Havelock, Ferdinand Cavendish-Bentinck, and Humphrey Slade, powerful, wealthy, and influential members of Kenya white settler community, though they appear from time to time. Center stage belongs to individuals who have scarcely made their appearance in the story of Britain’s departure from Kenya in 1963. Here, the leading lights are A.T. Culwick, B.F. Roberts, and L.E. Vigar, racists, profoundly against Africans and Asians alike, and robust federalists in defense of European privilege right up to the bitter end. ... After discussing the Dawe’s plan, presented to the Colonial Office in 1942 and calling for a grant of self-government to Kenya’s settlers in the White Highlands, Maxon discusses the majimbo plans put forward in the 1950s. ... This is a work of impressive and careful scholarship. One looks forward to Professor Maxon’s further volumes on Kenya’s constitutional history." —International Journal of African Historical Studies (IJAHS)

"Throughout the history of Kenya as a colony, white settlers sought to hold onto their political, economic, and social privileges at the expense of millions of Africans. It is the pursuit of this power that led to the rise of majimbo, a theory of federal system of government that was the antithesis of the dominant unitary government structure imposed by colonialism. This book deftly tackles this topic with unusual care and devotion to crucial details. Robert Maxon provides the history of the idea behind majimbo and its linkage to settler politics in colonial Kenya. One of the book’s strongest qualities is its detailed and meticulous research. Maxon makes use of numerous hitherto unseen primary sources from the National Archives (Kew, London) and even from the National Archives in Nairobi, Kenya. The net result is that this book is an original and well-researched history of one of the most important, if not contentious, questions in Kenya’s history. The book will fill a wide gap in Kenya’s colonial history. This impressive, well-crafted study will be very enthusiastically received by academic readers and general readers eager to understand the concluding years of the settler colonial enterprise in Kenya. Given how the book has been written in a jargon-free manner, it will also appeal to students of African studies and politics and scholars of comparative colonial studies."—Professor W. O. Maloba, Chair, Department of Black American Studies, and Professor of History and Black American Studies, University of Delaware

"This book is a most timely discussion of one of the most contentious issues in the politics of Kenya. The postelection violence in the country in 2008 was informed largely by contentions over the implications of the majimbo system of government. This study deals with a critical issue in the politics of contemporary Kenya and traces its historical development and trajectories over time. The strength of the book lies in the author’s critical understanding of the topic and its historical development. He brings it up to date, effectively highlighting the contours of the debate to the present time. Robert Maxon is to be applauded for his intricate knowledge of the issue in Kenya. This book will be of great interest to historians of Kenya and the postcolonial world, political scientists interested in institutional development, and all those with an interest in the politics of the developing world." —Professor Shadrack W. Nasong'o, Chair, Department of International Studies, Rhodes College

Chapter 6. Federalism at a Dead End: Conclusions and Analysis